Juan de Borgoña was hiding under crude repaints and glitter

The 1,300 inhabitants of the Albacete city of Alcaraz always boast of having one of the most beautiful squares in Spain, in whose construction one of their own participated in the 16th century: Andrés de Vandelvira. In it two towers stand out facing each other in height a few meters away. Also of having the oldest pilgrimage in the country in honor of the Virgin of Cortes, which next year will celebrate 800 years of his appearance to a shepherd on an oak. And now, they can also say that the main altarpiece of the Church of the Holy Trinity, before which they have prayed so many times, preserved, under some nondescript baroque paintings, full of clumsy and crude repaints and glitter, eight magnificent panels made by John of Burgundy (around 1470-1535), considered one of the introducers of the Qfour hundred Italian in Castile and one of the most prominent peninsular painters of the early sixteenth century, with works such as those he did, commissioned by Cardinal Cisneros, in the cloister and the chapter house of the Cathedral of Toledo, starting in 1495.

The eight tables that Juan de Borgoña made for Alcaraz, according to the experts who have seen them, are exceptional paintings on the cycle of the Virgin Mary, with themes such as The Annunciation, The Birtho y The Flight into Egypt, in which the quality of the drawing, the brilliance of the golden backgrounds and the calm attitude of the figures that show the connection of Juan de Borgoña with the Hispano-Flemish painting of Italian influences by authors such as the Florentine Ghirlandaio, in whose workshop apparently was formed until 1494. 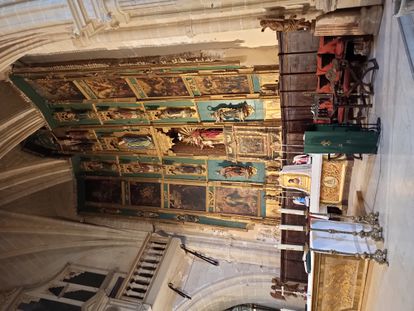 The altarpiece of the church of the Santísima Trinidad de Alcaraz (Albacete), before its restoration, with the appearance that the eight tables and the sculptures had until October 2020. TO. M.

But in the eighteenth century, these paintings were covered with plaster and then painted over, with motifs from the life of Jesus Christ, works of very poor quality greenish-gray tones. It could have been worse, since the normal thing was, due to changes in tastes, to disassemble the boards and replace them with new ones, in keeping with fashion. Perhaps the two meters in height and the almost 100 kilos of each of these paintings made it easier to repaint them than to disassemble them from the altarpiece, which reaches 12 meters in height.

The quality of what was seen was so bad that even when in 1999 the historian Aurelio Pretel published, in one of his documented works on Alcaraz’s past, that between 1505 and 1509 several payments were made to Juan de Borgoña for painting the tables for an altarpiece and a cross for the Trinity of Alcaraz, everyone assumed that these paintings had been lost throughout the centuries.

But now they are coming back to light after the restoration work that began in October 2020. Pablo Nieto leads a team of five people in his workshop The Mullion of Albacete focused on the paintings and the altarpiece. They have already finished four: The Annunciation, The Birth, The Flight into Egypt and Jesus lost among the doctors. Two more are in the process of restoration: Cry over the dead Christ at the foot of the cross and the Epiphany. And in the other two, which continue in situ In the Alcaraz altarpiece, there have been tastings that show the presence of “gilding with fine gold of the highest quality” and of the 16th century paintings. According to Nieto, who plans to finish his work in February, some of the works have suffered the effects of a fire, but retain between 70% and 80% of the original.

Central nave of the church of the Santísima Trinidad de Alcaraz (Albacete), with the altarpiece under restoration, on October 23. / J. Á. M.

The art historian Luis Guillermo García-Saúco, a great expert in the ecclesiastical heritage of the province of Albacete, alerted the restorer of what could appear under the repaints. He is one of the few who have been able to see the tables and highlights “their superb quality, in clear consonance with other works by Juan de Borgoña from Toledo, Cuenca or Ávila”. The expert compares this discovery for Albacete art with the discovery in 1929 in the church of Santa Catalina del Bonillo of a Christ painted by El Greco, present since then in the monographs of this artist.

García-Saúco also highlights the importance of the twenty late-Gothic sculptures made at the same time as the paintings, “with which they form an extraordinary unit” in this altarpiece. He attributes them to Diego Copín from Holland, “A sculptor of the first order who, curiously, worked with Juan de Borgoña in the altarpiece of the cathedral of Toledo in those years”. The best, for him, are those that represent Santa Ana Triple, a Calvary and one Virgin of the Assumption; but all have also gone unnoticed by “the deplorable repaints and glitter that detracted from them.”

Ramón Sánchez, parish priest of the church of La Trinidad, remarks that the restoration of the altarpiece was scheduled so that it would be ready for the celebration of the Jubilee Year of the Virgin of Cortes, which was inaugurated last August and will conclude in September 2022. “The It has been a surprise or small miracle that the original works represent a complete Marian cycle, reinforcing Alcaraz’s connection with his Virgin ”, he assures. For the priest, “there is no doubt that these paintings will be a boost for tourism in the area and will have a great social impact in Alcaraz.”

Plaza Mayor de Alcaraz, with the tower of the Santísima Trinidad church, on the left, and that of Tardón, on the Dominican market, on the right. TO. M.

The works had a budget of about 148,000 euros that were paid, in equal parts, by the Junta de Castilla-La Mancha, the Bishopric of Albacete and the parish of Alcaraz with their parishioners, while the city council supports and collaborates with campaigns. But the appearance of Juan de Borgoña has raised the budget and the Board will pay for the work on the eight tables. Then he will present them in an exhibition at the Museum of Santa Cruz de Toledo and later they will return to his church in Alcaraz. García-Saúco believes, however, that the tables deserve a more prominent presentation, “even in El Prado”, since he considers that they are works that “will become part of the history of Spanish art.” In fact, the museum of Madrid It has three works by Juan de Borgoña, although only one, La Magdalena and three Dominican saints, has unanimity of the experts in the authorship of this painter.

The Albacete city of Alcaraz struggles to preserve its heritage and make known its rich history full of illustrious people, such as those who lived in the 16th century, apart from Andrés de Vandelvira, one of the best Renaissance architects in Spain. Among them the philosopher Miguel Sabuco and his daughter Oliva, authors (it is not known if the father or the daughter) of the New Philosophy of the nature of man, and the humanist pedagogue Simón Abril, among others. A city always graced by the Austrian monarchy since in 1526 the Emperor Carlos I appointed his wife, Isabel de Portugal, lady of Alcaraz. Before the fame of this city was given by the carpets made with “the Spanish knot”, which today are pieces listed in auctions and that can be seen in museums such as the Metropolitan in New York, the Victorian & Albert in London or the National Archaeological Museum of Madrid.