Nobody knows the names they would have when they had to exist, seven centuries ago, but they have been renamed CP-701, CP-702, and so on, one after the other, until CP-715. From the 14th and early 15th centuries until 2007, when the floor of the Capela do Pilar of Lugo Cathedral was raised in an archaeological intervention, their bones slept a dream that seemed eternal after having lived intensely. Now they are back in the world of the living, in the Faculty of Biology in Santiago, waiting for future genetic tests to go a little further in the search for their identity. For now, what has been reconstructed are biographies full of shocks in a city that was rebelling against the feudalism of the bishopric in a climate of violence and settling scores between the emerging bourgeoisie and the powerful clergy.

Seven are children under the age of seven, with milk teeth, and the rest, adults who still retain the trace of their ailments and, above all, a surprising amount of trauma. Fractures of the phalanges and ribs that came to be healed in life, it may be that thanks to the care of the doctors who are known to have hired the cathedral council. But also cranial traumas (in a higher percentage than in other European necropolises studied) that are hardly explained by accidents in everyday life, point to violent clashes between people.

Researchers Olalla López-Costas (University of Santiago de Compostela), Gundula Müldner (University of Reading, United Kingdom) and Kerstin Lidén (University of Stockholm) believe that the prematurely dead children, all found in the southern area of ​​the chapel, could having belonged to noble families. Also, that most of the adults – buried in the northern half – were religious (priests, chaplains, sacristans, although no bishop) or characters of a social elite related to them. To write the chronicle of these 15 souls, the team of archaeologists and anthropologists studied 1,407 documents in Galician-Portuguese and medieval Latin and 955 bone pieces rescued from austerely built tombs, with slate slabs, in which no furniture was found that give clues. The results are compiled in the article Biological histories of an elite: Skeletons from the Royal Chapel of Lugo Cathedral (NW Spain), published in the scientific journal International Journal of Osteoarchaeology. As Olalla López-Costas explains, the editors considered the fusion of techniques used to be very novel: the study of historical texts, paleopathology and the analysis of stable isotopes intersect with each other to concoct the story of a society on fire. 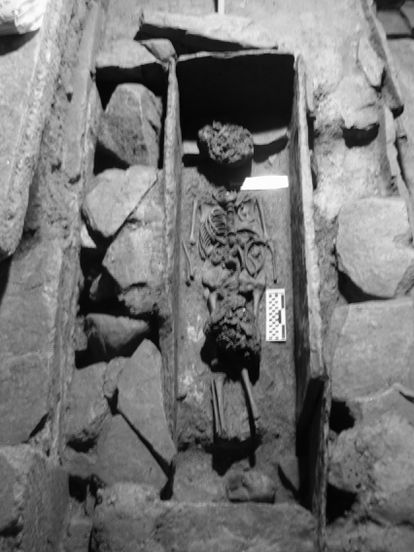 Skeletons of two children under the age of seven in the Capela do Pilar or Real of the cathedral of Lugo.olalla lópez costas

From forensic analysis it is known that these adults died at an advanced age for the time, around 50 years old, something uncommon in other social classes such as the peasantry or artisans. Also, that they moved a lot (they had lived in coastal places and at least one of them, in the Meseta) and that they ate much more protein than the rest of the peasantry: assorted meats, eggs, cheese, wheat and rye bread, fish from river (the Miño runs through the city) and also from the sea, because they received food from the lands that the Church of Lugo owned on the coast. It is possible that the pathologies detected in some are related to diet: gout and DISH (diffuse idiopathic skeletal hyperostosis), a disease linked to obesity and diabetes on many occasions.

And this sumptuous existence (and, according to the work, surely watered with abundant wine) contrasts with those times of deep crisis exacerbated by the Black Death, a pandemic that decimated the population and emptied many urban properties of the bishopric of tenants, concerned about the decline in its collections. The lower classes were starving and dying, and the bourgeois elites were indignant at how in Lugo they did not win the rights and social power that they had conquered in many other places. Here, in what the authors recall was the most influential city in the Northwest at that time, dominated by the bishop, very well connected with the monarchy, who enjoyed the protection of the Crown. However, “the feudal world was reeling” around, López-Costas describes, and the documents record murders of ecclesiastical leaders and assistants to the bishopric at the hands of the bourgeoisie, prosecutions for crimes and the participation of priests in armed confrontations. as when the city was besieged by Enrique II (1366) in the civil war against his brother Pedro I, for whom the Lugo cathedral had taken part.

For example, in 1345 a trial was held against Bishop Don Xoán for the death of two representatives of the consistory who had previously stoned the prelate. In 1403 a group of tailors, furriers, merchants and rope makers assassinated Bishop Don Lope. And María Castaña, a mythical noblewoman in Galicia (that of “the times of Maricastaña”), rebelled against the abuses of episcopal feudalism and in 1386 killed Francisco Fernández, butler of the almighty Bishop Pedro López de Aguiar. This was the oldest and most influential of all the leaders of the Church of the time in Lugo. He had been confessor of Pedro I and knew how to continue to strengthen ties later with Enrique II of Trastamara, despite having taken sides with his rival. To flatter the monarchy, he decided to call the Royal Chapel which is now known as Capela do Pilar. Apparently, her aspiration was to be chosen to bury members of the crown there, but already in her time she began to be occupied with the corpses of small children and adults, supposedly religious, with hazardous lives and bruised bones.