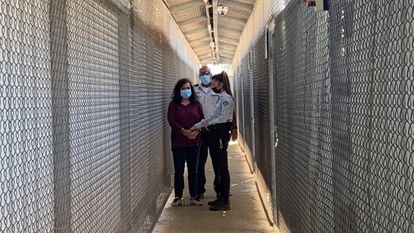 The Spanish humanitarian worker Juana Ruiz Sánchez is transferred, handcuffed to her feet and hands, to attend her trial on August 10 before the Israeli military court in Ofer (West Bank) .EFE

The judicial ordeal of the Spanish aid worker Juana Ruiz Sánchez, 63 years old and suffering from a chronic illness, has been going on for more than six months before the military justice of Israel. The military court of Ofer, in the West Bank, has denied this Wednesday the request of his lawyer to pass to the situation of house arrest while the process continues, in which the humanitarian worker in Palestine has been accused of belonging to an “illegal organization ”That diverted funds to a group classified as a terrorist.

Juana Ruiz’s husband, the Palestinian Elías Rishmawi, assured that the military judge had rejected the request for release “because she has not yet been in jail for that long” and her situation may be reviewed “in the future.” He specified that before the next trial session, scheduled for November 10, the defense and the Prosecutor’s Office plan to meet to evaluate a possible agreement between the parties under judicial supervision. His wife was not present at the hearing – as happened on August 10, when she came handcuffed and shackled, and without an official interpreter – and participated in the session by telematic means. “I am innocent!” Were the only words she has uttered in her last appearance, according to her husband’s account.

Juana Ruiz has remained behind bars after her arrest. A score of Israeli soldiers stormed his home in Beit Sahur, on the outskirts of Bethlehem, in the early morning of April 13. Employed for 28 years in the Palestinian health NGO Health Work Committees (HWC), the aid worker is imprisoned in Damon prison, in the mountains surrounding Haifa (north coast of Israel) along with dozens of Palestinian “security” (nationalist) prisoners. Earlier, she spent several weeks in isolation in a cell in a prison near Tel Aviv, where she was subjected to lengthy interrogations by Shin Bet (internal security service) agents.

His situation was then described by diplomatic sources as “psychological and psychic pressure.” Ruiz took more than two weeks to receive his personal effects after his arrest, such as reading glasses, and he could not change clothes with his own clothes. The Spanish aid worker must take medication due to a chronic illness and was mired in a depressed state for several weeks due to permanent isolation at the beginning of her detention.

He also had to sign documents in Hebrew, a language he does not know, without the presence of an interpreter. This is the first time in recent times that a person with exclusive Spanish citizenship has received the inflexible treatment that the Israeli military justice has systematically applied for 54 years to residents of the occupied Palestinian territories. Nor are there known close precedents of European citizens who have gone through the same judicial ordeal.

In his first contact with the head of Israeli diplomacy, Yair Lapid, the Spanish Foreign Minister, José Manuel Albares, inquired in July about the situation of the jailed humanitarian worker. Albares also specified in a parliamentary appearance that he was going to be personally involved in the matter, as his predecessor in office, Arancha González Laya, had already declared. Official interest, however, has run up against the slow progress of the process in Israel.

The unexpected changes in the counsel of the aid worker and the change to the head of the Consulate General of Spain in Jerusalem also coincided with the development of the case, which was complicated after the arrest last July of the Palestinian Shatha Odeh, executive director of HWC. In the same raid, 10 other people from the NGO where Juana Ruiz worked were arrested by military forces. All of them are accused of participating in a network to “illegally introduce funds into the Palestinian territories”, which were diverted to the Popular Front for the Liberation of Palestine (PFLP), a group considered terrorist by Israel and the European Union, “through fraud. , counterfeiting and deception ”to donors from European countries.

Avigdor Feldman, current lawyer for the Spanish aid worker, considers that the process “forms part of an operation by Israel to accuse civil society associations that carry out humanitarian tasks in the Palestinian territories.” Feldman, founder of the Israel Civil Rights Association, was the advocate for Mordechai Vanunu, the nuclear technician who in 1986 exposed the existence of Israel’s secret atomic weapons program. Juana Ruiz’s family had to open a fund-raising account to defray the high costs of legal defense, according to a statement released by the Juana Ruiz support platform, made up of 140 organizations in Spain.

“The Secret Service Investigation [Shin Bet] presented to the court is very unsatisfactory: general accusations, without evidence or witness statements ”, argued Feldman after the hearing held in August in Ofer in the presence of the aid worker. “Some of the facts [que forman parte] of the charges were made in Spain, where this court does not have jurisdiction ”, the lawyer added in his allegations. “We also deny that there is a connection between our client and the Popular Front for the Liberation of Palestine. This organization was declared illegal in 2020, but the decision was made effective in 2021, and all the accusations are previous ”, he added. Extraterritoriality and non-retroactivity are determining factors in the nullity of the case, according to the defense. “My client must be released; We see no reason for him to remain behind bars. You can stay in a place outside the prison where she can continue [en arresto domiciliario] while the process ends, ”argued the petition that has now been rejected.

Last week, the Israeli Defense Ministry declared six Palestinian NGOs as terrorist organizations. These include the main human rights associations in the West Bank that bring war crimes charges before the International Criminal Court against senior military and civilian officials of the Jewish state. Like Juana Ruiz, they are accused of supporting and financing the banned Popular Front for the Liberation of Palestine, a minority left-wing party. The US State Department and the EU have announced that they will seek clarification from the Israeli government on the decision, which has been rejected by international NGOs such as Amnesty International and Human Rights Watch.

Incest: the Ciivise calls for better consideration of the words of mothers

Tatiana Clouthier defended electricity reform in the face of criticism from the PAN: “We have no claim”

These are the largest CO2 emitters in the Netherlands

Tatiana Clouthier defended electricity reform in the face of criticism from the PAN: "We have no claim"