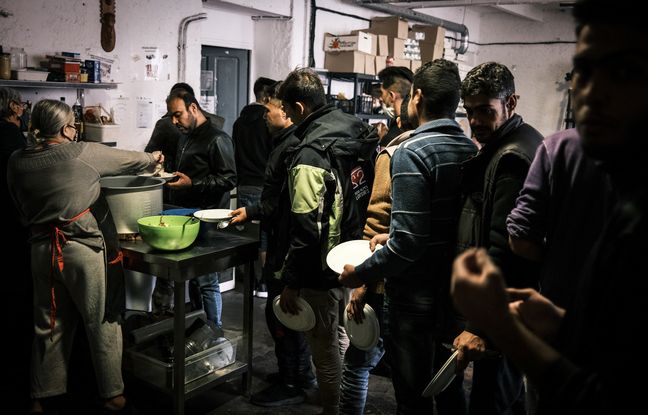 150 to 200 migrants sleeping at Briançon station (Hautes-Alpes) since Sunday have finally been able to be accommodated. Mostly young Afghan men and a few families, they had ended up there after the closure of a refuge. According to the prefecture, “several dozen” of them left by “using various means of public transport” during the day on Monday, but the others still occupied the station on Monday evening and were preparing to spend a second night there.

They were finally received in a church “by the priest of Briançon”, announced the support group Tous Migrants during the night from Monday to Tuesday. The bishop of Gap, Mgr Xavier Malle, confirmed this welcome, without being able to say how many migrants joined the church, owned by the diocese. At the beginning of the evening, the bishop had given his support to the migrants by interfering in the controversy which opposes, since Sunday, an association of reception of the refugees to the prefecture.

The Bishop of Gap asks Darmanin to intervene

“I ask the representatives of the State to look reality in the face: it is not by making difficult the reception of the refugees in Briançon that the immediate and structural problems will be solved”, declared Mgr Malle in a press release. Before asking the Minister of the Interior, Gérald Darmanin, “to intervene, not to send the police but to mobilize the Civil Security, the Red Cross, accept that the UNHCR intervenes”.

The situation became tense this weekend in Briançon, where the Refuges Solidaires association officially inaugurated, on Saturday, a new refuge for migrants arriving from Italy, larger than a previous reception center closed during the summer. . But Sunday, the association indicated to be “faced with larger arrivals, greatly exceeding its reception capacities”, limited to 81 people. As a result, she decided to “completely stop welcoming” new arrivals. “It is a question of dignity and safety but above all of safety”, explained the voluntary administrator of the association, Jean Gaboriau.

A situation which the Hautes-Alpes prefecture holds Solidarity refuges responsible. “Apart from any mission entrusted by the State, this association’s mission is to offer a place of reception to people who have illegally crossed the border of Montgenèvre,” said the prefecture in a statement Monday evening. The new refuge, called Terrasses Solidaires, is “well identified by the networks of smugglers” and “caused an increase in flows”, added the prefecture, for whom many of these arrivals are in “irregular situation”, for lack of having asked. asylum in their country of entry into Europe, Italy.

“A station is not a place of accommodation and the risks run by people are not less than at the“ Terraces ”, on the contrary. This policy of a fait accompli carried out by the associations is intended to put pressure on the public authorities, so that they comply with their demands, which is not acceptable, ”insisted the prefect Martine Clavel. The association pleads, for its part, for “actions to be put in place as soon as possible” and in particular that “other operators take care of emergency reception in addition to (its) action”.

Weather in Tapalpa today: the forecast for Tuesday, October 26, 2021

Compulsory vaccination against Covid-19: how the idea is gaining ground in Europe and around the world

Compulsory vaccination in the Netherlands: necessary or tyranny?

Weather in Tapalpa today: the forecast for Tuesday, October 26, 2021