“For that look I could denounce them for harassment and rape.” Carla Toscano, the scourge of Vox feminism 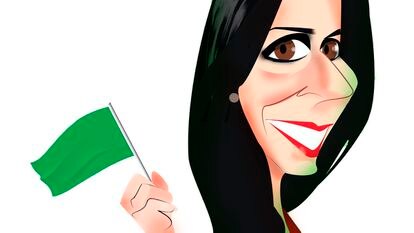 Carla Toscano is against positive discrimination measures that try to guarantee the presence of women in institutions. His party, Vox, has promised to abolish them. But, if it weren’t for the quotas, she probably would not have been elected as a deputy in April 2019. The so-called zipper law requires that no sex have more than 60% representation among the top five candidates for Congress. The first three on the Vox for Madrid list were immovable (Santiago Abascal, Javier Ortega Smith and Iván Espinosa de los Monteros), so the next two had to be, necessarily, women. Vox removed five deputies for Madrid and Toscano was the fifth.

Three decades ago, when he was a Basque MP for the PP, Abascal agreed (according to a book) with the candidate who preceded him to circumvent the electoral law. She resigned and he took his seat. In 2019 it was not necessary. Vox scrupulously complied with the law. Scrupulously, not a millimeter more. For this reason, his group is the one with the fewest women in Congress (27%).

Carla Toscano de Balbín (Madrid, 43 years old) is a spokesperson for Vox in the commission on gender violence, something that for Vox does not exist. It may seem contradictory, but he is also running for regional elections and wants to suppress the autonomies.

Vox has always entrusted a woman with the role of scourge of feminism and battering ram against what it calls “gender ideology.” The pioneer in this task was Alicia Rubio, author of When they forbade us to be women … and they persecuted you for being men, the bible of deniers of violence against women. Until her party turned its back on her: after being a candidate for Congress in 2015, she was left off the list in 2019 and Abascal removed her from her executive months later. He ended up in the Madrid Assembly, where he continued to scandalize with phrases such as “feminism is cancer”, but no Vox leader came to present his next book.

To replace her, Abascal chose Toscano, a graduate in Law from the Complutense University of Madrid, a master’s degree in linguistics applied to the teaching of Spanish and a specialist in humanitarian aid, according to her curriculum.

The year before being a deputy, she did not charge a penny for her work, but her declaration in Congress reflects 96,099 euros of dividends (her family has an industrial premises business) and income of 800 from renting a house. Toscano paid 804.59 euros of personal income tax in 2018.

Tall, slim and with long black hair, wearing T-shirts of bands of hard rock Like Gun N ‘Roses or AC / DC and with thousands of followers on social networks, Toscano was more glamorous and modern than Rubio, although no less rude. “Feminists, I’ll be brief: you suck” or “pigs” (directed at Femen activists), he wrote on his Twitter account. Although the most disturbing thing was his congratulations for the end of the year in 2019: “Happy 1936. And save the leftovers from today’s dinner, you are going to need them.” His fellow seats assure that in private he is “very polite, cordial and empathetic.”

On November 25, 2020, International Day for the Elimination of Violence against Women, she walked with a T-shirt with the slogan “Tears of a feminist”; and last August, an association of separated men, which says that most of the complaints of mistreatment are false, rewarded her for defending them. It so happens that Toscano is separated and has two children.

His star moment came on the 14th, when he rose to the rostrum to oppose the so-called law of the only yes is yes with the slogan “#Notmetoo” on the chest. “Mr. Simancas, are you looking at me? Mr. Pebble? It’s that maybe I don’t like the way they look at me. If I were another type of woman, by that look I could denounce them for harassment and rape, and you would have to believe me because I am a woman, ”he snapped at the bench on the left. It wasn’t the first time he’d used that trick. In September 2020, he announced that he would not denounce Pablo Iglesias for the lascivious look that he had allegedly given him when passing his seat. But then it had less echo.

To oppose the law, Toscano made a caricature of it. What the bill punishes are “expressions, behaviors or propositions of a sexual nature that create an objectively humiliating, hostile or intimidating situation for the victim.” It doesn’t seem like a glance is enough.

Last August, Toscano complained about the left’s “morbid and sickly” interest in “promoting homosexuality [como] the most wonderful option in the world ”. His real objective, he assured, is “to blow up the family.” Obviously, he was not referring to the family that two people of the same sex can form, but to the only one that deserves such a name, the traditional one.

After having labeled them “chiringuitos”, Vox is now setting up its own feminist (or, more precisely, feminine) associations. One of them, Women for Equality, advocates a “healthy and equitable feminism”, ensures that equality between both sexes is already achieved, rejects abortion and puts as priorities “the protection of the family” and “the right to be a mother ”.