And the next one is … Dominnico. The designer Domingo Rodríguez Lázaro won the biggest prize in Spanish fashion on Monday night, the Spanish edition of the magazine Vogue delivered since 2012 under the name of Who’s On Next (WON), something like Who is the next one? An award that recognizes the talent and vision of a budding fashion designer. In addition to the possibility of parading at Mercedes-Benz Fashion Week Madrid (MBFWM), the entrance to the Association of Fashion Creators of Spain (ACME) and the support and mentoring of the head, the winner takes 100,000 euros, thanks to the Inditex collaboration since the first edition. The jury defined their work as “de ready to wear with haute couture finishes ”. He, incredulous and full of emotion, thanked his parents and those close to him for the award, and congratulated his two fellow finalists, Sonia Carrasco and Reveligion. “I have been in your position and getting here is very important, being part of this family gives life and visibility to the project. What is to come is very big and I congratulate you ”, he said.

This was the second time that the Alicante, who founded his firm five years ago, was presented for the award. But the process to obtain it that culminated on Monday night began several months ago, when applicants submitted their projects. First 15 were selected and of those, finally three remained: Dominnico (created by Rodríguez Lázaro), the Valencian Sonia Carrasco and the Sevillian Reveligion (commanded by María Rodríguez Blanco). Four months ago the three faced the great test: showing their garments before a jury made up of a score of experts, from Nuria de Miguel, director of the Madrid catwalk, to photographer Miguel Reveriego, designer Juan Avellaneda or the director of ACME , Pepa Bueno, who assured in that presentation of the candidates that this is “the most important fashion award that exists in Spain.” This 2021 stands out as president of the jury the editorial director of Vogue in Europe and director of the publication in the United Kingdom, Edward Enninful, who came to Madrid for the final gala.

That same role had been played in previous editions by such relevant figures in the industry as the designers Alber Elbaz (who died last April and to whom an applauded tribute was paid at the awards ceremony), Giambattista Valli and Jean Paul Gaultier or the journalists Suzy Menkes and Hamish Bowles. Enninful commented with EL PAÍS after the gala – a sober celebration with just a hundred guests, followed by a small private dinner – that it had been “very interesting” to be part of the candidate selection process, in which he was present on his last day, and praised the talent of the three young people, emphasizing the “intense bond” that this award generates between them and that also unites them with past generations of winners.

At the end of last June, the three candidates tried to hide their nerves in the presentation before the jury. More than an award, this is a gymkhana: you have to submit a dossier of the brand (which must be at least two years old), then several garments and, what seems more difficult for the three of them, defend their project before the jury. As Inés Lorenzo, the magazine’s content manager, explains, in the dossiers (books, boxes, each in its own format) “there is already an important part of philosophy, brand values, of what they project”. “It allows us to tell who they are and what they would like to be. And you know who you want to see more of ”, he assures. While later, in the interview before the jury – with a montage on a stage, garments and a restrained, but powerful staging – they are questioned and challenged: “On sustainability, monetization, social commitment (women’s issues or the environment ), business structure, use of the award, markets, technique, that they present a business plan … ”, Lorenzo lists. 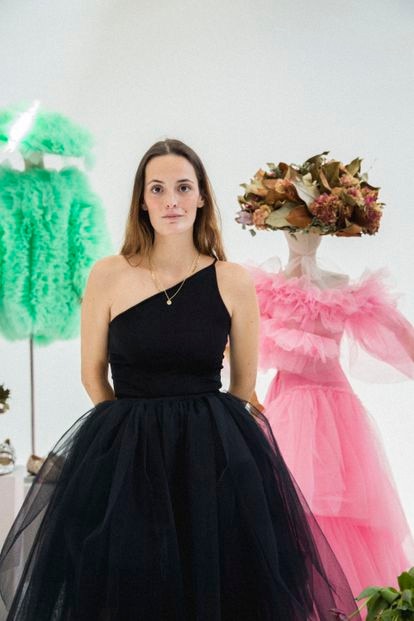 María Rodríguez Blanco, creator of Reveligion, with the designs she presented to the jury for Who’s On Next 2021 Studio Photo (Silvia Tortajada)

After the enormous effort, in the delivery on Monday, the still candidate was exultant. The work of Dominic he had attracted the attention of the jury during the presentation for his seriousness and professionalism; The man from Alicante – who has dressed Rosalía or Lady Gaga – came to present a studied SWOT analysis (weaknesses, threats, strengths and opportunities) about his firm. He had tried it last year, but it had been left to the doors with the triumph of Mans. “Not having won was important to reflect on,” he recounted in June, in the presentation to the jury, which he thanked for their advice, which had made him “go from being a project to being a company.” “I have a sales team, a more solid website … Last year I had to analyze and understand everything, it was a privilege to be here and not a game, it is my professional career”, he explained about the great “economic, emotional and mental ”realized, which had helped her learn that her designs,“ based on retrofuturism, escapism and the dreamlike ”and without gender, also have to be“ commercial and viable ”:“ I want to put my brand on myself ”.

His predecessors know the importance of this push. The first to win the award was Marcela Mansergas, now 43 years old from Valencia, who still remembers 2012 with enthusiasm. “It was smaller than now, something that was just beginning. I have never been in favor of doing a catwalk, but I read it in the magazine and I saw it as an alternative, it was a way of making myself known ”, explains to EL PAÍS who today has specialized in wedding dresses. “It puts you in the window. And we are all canines always, so economically it is a great help, you get to start, you can invest. You take it very seriously, “he admits, stating that if he hadn’t managed to win, his career would probably have been” slower. ” “This makes your way a lot easier. You go from knocking on doors to being called ”. 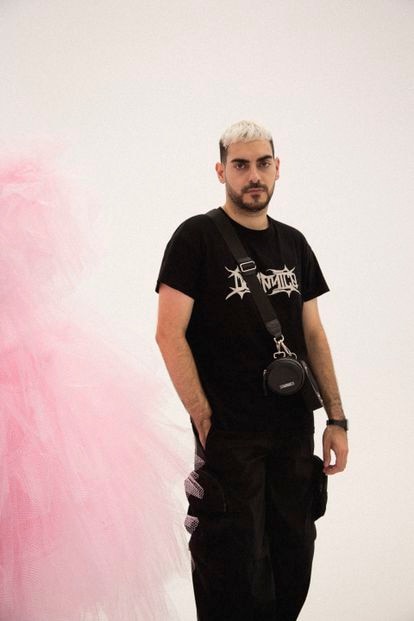 Domingo Rodríguez, founder of the Dominnico brand, in June 2021 during the presentation of his project to the Who’s On Next jury. Studio Photo (Silvia Tortajada)

It is endorsed by one of the recent and most media winners, Alejandro G. Palomo, creator of Palomo Spain, who four years after the award still remembers “the nerves, many, of the times that more”. For him “it was almost vital to win it” for the economic kick. “I would have liked the previous year,” he now recognizes. “We were newer, fresher, but we couldn’t because we had to be two years old. The next we had them and they told us: ‘He doesn’t deserve it anymore, he doesn’t need it’, but it was very necessary. It was a kind of validation, of a pat on the back, of ‘keep it up,’ he recalls. Both Mansergas and Palomo also highlight the importance of being part of what they call “the WON family” to which other names of a generation that has renewed Spanish fashion also belong: Juan Vidal, Moisés Nieto, Leandro Cano, Carlota Barrera and Maria Ke Fisherman.

“It’s always nice to say that you were a WON winner, that they gave you that value in your country,” says the Cordovan. “Look, I have had a thousand recognitions, I have a trunk full of awards, but they do not help the reality of your company. It becomes very hard for young people, incredibly hard: either you come from a millionaire family or you have a business plan or it takes a lot of work to sell and start ”, he explains to give context to the importance of the award and its economic value when it has been in business for five years and, finally, it can finance itself.

Fashion is a sector of dreams and fantasy, of events and red carpets, but also a powerful industry with many mouths to feed. A sector that represents, according to Acotex, 2.8% of Spain’s GDP and in which 4.1% of the labor market is involved. Beyond cold data, it remains a place that attracts the attention of creative minds and immense talents, who need support, visibility and funding to carry out viable projects. The awards are a formula tested in the international industry. Among the most prominent is that of LVMH, created in 2014 and endowed with 300,000 euros, which a few weeks ago was won by the Albanian Nensi Dojaka; and the ANDAM award, awarded since 1989 by the French Ministry of Culture and which distributes more than 430,000 euros in four categories. In the US and since 2003 Vogue It also has another award together with the CFDA, the Council of Designers of America, which each year helps three emerging talents with mentoring and with 400,000 dollars (about 345,000 euros) for the first and 150,000 (about 130,000) for the next two; It has been won by Christopher John Rogers in 2019 and other names such as Altuzarra or Proenza Schouler. In addition, there is the formerly called Prize of the International Wool Secretariat (in which in 1954 Yves Saint Laurent came to compete against a then unknown Karl Lagerfeld, who was the winner), called for a decade the Woolmark Prize and endowed with 100,000 dollars .

In Spain, between 2007 and 2009, the Mango Button award was awarded, giving 300,000 euros to an emerging international designer. Since 2009, the Ministry of Culture annually awards the National Fashion Design Award, which has recognized designers as diverse as Manolo Blahnik, Paco Rabanne and, the most recent, Ana Locking, and awards 30,000 euros. For its part, the Ministry of Industry has awarded the National Awards of the Fashion Industry since 2013 with eight categories (company, designer, footwear industry, accessories …) and without financial endowment. In addition, in Madrid there has also been the Capital Fashion Award for two years, endowed with 60,000 euros and which for now has been won by Moisés Nieto in its first edition and Oteyza in its second. 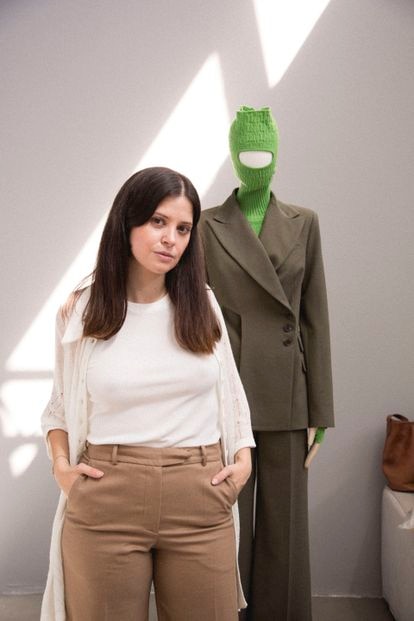 The designer Sonia Carrasco in June 2021, during the presentation of her project to the Who’s On Next jury. Studio Photo (Silvia Tortajada)

Since the creation of the EGO catwalk, the event has presented an annual award to one of its young designers, which complements the award for the best MBFWM collection. Andrés Aberasturi, founder and director of EGO, has no formal relationship with Who’s On Next, but both projects provide feedback. “In the end, the EGO award remains to give visibility to young designers, but with that it is not valid, you need something behind it. My great frustration is putting him on the catwalks, but then what? It was the subject that we had pending, that part of mentoring ”, he acknowledges, stating that in Spain there are lots of talent, but also“ tremendous barriers ”.

Going one step further, Aberasturi advocates establishing a state federation “that depends on the State and the Ministry of Culture”; for now the closest thing there is is ACME, private, with an entry fee and with a decision by its partners of who they accept and who they do not. “WON gives them money and contact with a great publishing group; EGO has the resources of IFEMA as an institution; and ACME is private. The administration has to do its part. We need someone to represent us all, not just the partners. In the end, we are all turned away from each other and the victims are the designers, ”he says. The reflection is for the future, but for now Dominnico, the 10th winner of the award, still has a lot to celebrate in his reign this year. And continue working to continue as an active presence in Spanish fashion for at least 10 more years.

In the Texas village of Utopia, teachers go to school with a gun

In pictures: crossing the Coolsingel at a height of 29.5 meters