Why did France have to wait for Fabio Quartararo to have its MotoGP champion? 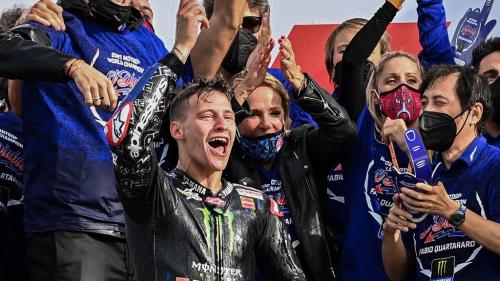 France had been waiting since 1949 to have its first MotoGP speed world champion, but it has learned the lessons and intends to capitalize on the success of Fabio Quartararo, crowned Sunday, October 24 at the Grand Prix of Emilia-Romagna. Because France now has assets. “Off-road, we are envied. In speed, we envy Italy and Spain”, analyzes the other Frenchman present in the premier category, Johann Zarco, currently 4th in the championship and crowned in Moto2 in 2015 and 2016.

Before the era of Italians and Spaniards, which began in the 2000s, the premier category “was reserved for Americans and then Australians” in the 1980s and 90s, at the time of the 500cc, goes back the specialist journalist Michel Turco.

“They were much more difficult bikes to ride. Those who dominated had not raced in the lower cylinders, but came from categories with a more violent ride,” he explains. “So there were no French people but not really Europeans either. A few Italians (Marco Lucchinelli, Franco Uncini) and Spaniards (Alex Crivillé) because they had a bigger tank.” Patrick Pons or Michel Rougerie, authors of several World Cup podiums, could have been one, if they had not been killed on the track in the early 1980s.

“MotoGP has been a game changer,” continues Turco. “In terms of driving, it was easier for riders who had gone through the small categories (125 and 250 cm3, which became Moto2 and Moto3) to reach the premier class.”

In 2000, Olivier Jacque won the title in 250 cm3 but moving to the higher category was not convincing “because he was injured, because it was too complicated.” Régis Laconi, the last winner of a Grand Prix in the elite before Quartararo (in 1999), or Randy de Puniet, are experiencing similar trajectories.

The Italians (Valentino Rossi, Max Biaggi) and the Spaniards (Sete Gibernau, Dani Pedrosa, Jorge Lorenzo, Marc Marquez) take the lead. To see the French shine, we have to wait for Zarco (11 podiums and 6 poles position) from 2017 and especially Quartararo (20 podiums including 8 wins, 15 pole) from 2019. Our neighbors have “the attraction for discipline and the pool of pilots “, France is more of a motocross nation, Turco analyzes.

Moreover, Zarco (31 years old) and Quartararo (22 years old) – whose presence at the top during the same period is the fruit of chance – made their classes outside France, the first in Italy (under the leadership of of his former French manager Laurent Fellon), the second in Spain. This is because the speed industry in France is neither as structured nor as competitive as in these countries or as the French motocross industry.

This will change: the French Motorcycling Federation (FFM) presented in October a project to restructure initiation at the high level. “The desire is thanks to our champions that young people have it. Our job is to set up structures,” pleads its president Sébastien Poirier.

“Our objective is to prevent the little ones from going abroad before entering the European Championship and to ensure that they arrive there with a good level”, he already explained to AFP in March. . This is all the more important given that only one other tricolor is currently playing in the world championship: Lorenzo Fellon in Moto3.

It remains to be confirmed whether, as Poirier hopes, Zarco and Quartararo will “take the bike out of its midst” in order to expand our pool of aspiring champions. “Will the fact that we have these two French people encourage young people to ride more motorcycles? I’m not sure,” asks Turco. “If it lasts a few years, the sector can be built more easily with two locomotives”, believes Zarco, “godfather” of the FFM project.

In an expensive sport, the question of money will also be crucial. “The difference with Spain and Italy is also that they have sponsors, an industrial sector which participates”, recalls the president of the FFM. In France, it will take more than the promoter of the French GP, Claude Michy, than the Tech3 team of Hervé Poncharal (engaged in MotoGP and Moto3) or than the only other French team, the CIP of Alain Bronec (in Moto3), to offer outlets.

Beijing judges that Washington is “playing with fire” over Taiwan

They dismissed the prosecutor who investigated the power of Entre Ríos, Cecilia Goyeneche