Ant colonies follow the laws of soil physics to build long, sturdy tunnels, research published in the journal has revealed. Proceedings of the National Academy of Sciences (PNAS). In the amazing anthill there are complex tunnels that are more than a meter long, last for decades without collapsing and are connected to each other. The secrets of these architect ants were revealed by a three-dimensional X-ray analysis and by computer models that observed the position and movement of the animals as they excavated.

José Andrade, first author of the publication and director of the Geomechanics Laboratory at the California Institute of Technology, in the USA, (Caltech) explains by email that the construction of these cities with complex underground structures in which millions of ants can live is possible thanks to a behavioral algorithm that has been adapted and refined with the evolution of insects and allows them to instinctively dig tunnels without the entire structure collapses. “We were inspired by the exhumed ant nests that show how impressive and large they are – they can be the size of a person!” Says Andrade. Understanding and replicating these algorithms will serve in the future to create mining robots that simulate the operation of ants and excavate the soil of the Earth and other planets without the risk of collapse.

At the beginning of the research, Andrade and his colleagues believed that the ants “could determine which grains of earth and sand to remove and which not to ensure the stability of their tunnels,” through some kind of learning, says the scientist. However, at the end of the work they discovered that this behavior is unconscious and is genetically programmed. “They do it without really knowing how to do it.” Andrade affirms that the behavior algorithm of the ants “allows them to dig tunnels according to the laws of physics, making them more stable and at the same time easier to build and maintain.” 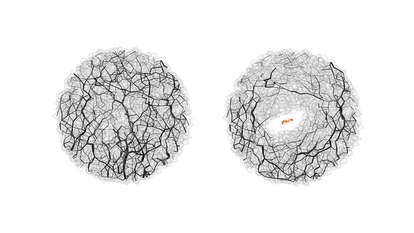 Granular forces (black lines) in the same place in the soil before (left) and after (right) the excavation of an ant tunnel.

The researchers found that the way colonies build their tunnels allows charges to redistribute and create a shielding mechanism that reduces the risk of collapse. “The ants seem to be playing Jenga without knowing it ”, jokes Andrade when referring to the famous construction game in which you have to try to remove pieces without knocking down the tower.

Robert Buarque de Macedo, a Caltech researcher and co-author of the study, explains by email that ants tend to dig tunnels in a straight line, which makes them choose the fastest and most efficient way to get, for example, to the room where the queen of the colony sleeps, or the rooms in which the baby ants are raised, or even the small rooms where garbage is thrown and food is stored. “That makes sense because a straight line is the shortest path between two points,” explains the researcher.

Buarque de Macedo insists that the ants also dig away from the walls and tunnels below the ground’s angle of repose, that is, below the steepest angle possible before the ground slides. “The ants can identify how steep the limit of that angle is for whatever they are digging, and they do not exceed it,” explains the researcher. Another key to successful construction is that as they dig the tunnel, they form arches within the ground that minimize surface force and pressure. “This reduces the possibility of the tunnel collapsing when the ants remove or relocate a grain of soil,” explains the scientist. And he adds: “it is very similar to how Roman arches work.” 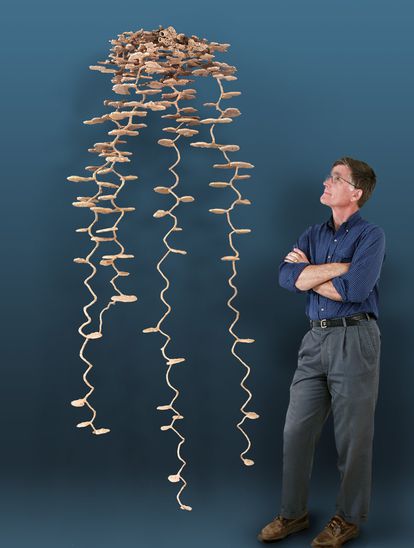 José Andrade explains that ants are not the only good architects of the animal world. Termites build similar cities, bee hives have impressive structures, beavers make stable dams amidst mighty rivers, birds weave nests in the treetops that resist wind and rain. “We don’t understand how everyone has behavioral algorithms that allow them to build these wonderful structures. We still have thousands of things to learn from animals, ”says Andrade.

The researchers confess that they had fun working with the ants. “We fought a lot to get them to cooperate with the investigation,” jokes Andrade. “It turns out that ants dig when they want to dig, not when you want them to dig. Many times we were looking with X-rays and the ants would stop tunneling and then we would stop looking and do it again ”. Buarque de Macedo agrees: “We had to make many attempts to capture the images we took. That made the investigation much more interesting and fun. “

In addition to the engineers, Joe Parker, assistant professor of biology and biological engineering, also participated in the work. “Until now it has been a mystery how ants build these structures that can persist in good shape for decades,” Parker states in a press release from the Geomechanics Laboratory at the California Institute of Technology. According to the researcher, the behavioral algorithm that allows the successful construction of the tunnels and that the scientists identified with X-rays does not exist within a single ant. “It is a collective behavior, of the colony, that emerges from all the worker ants acting together as a superorganism.”

Andrade and Buarque de Macedo say that with the findings of this study they hope to work on an artificial intelligence system that can emulate the behavior algorithm of ants when digging. The purpose is to create robots that can be used in mining and thus protect the lives of thousands of workers who often risk their health digging deep in the earth. Part of that emulation, Andrade says, will be determining how to scale the physics of ants for human-sized tunnels. “Granular materials scale in different ways than other materials like fluids or solids,” he says. And he concludes: “The next step after that? Robotic ants that could dig tunnels for humans. “