AMLO is the second most popular president in the world: Presidency

Jesús Ramírez Cuevas, General Coordinator of Social Communication of the Presidency of the Republic, reported on Monday that the English newspaper The Financial Times, which, taking up a study by the Morning Consult Political company, placed President Andrés Manuel López Obrador as the second most important president popular in the world.

According to the consultancy, the federal Executive has an approval of 65 percent.

In his Twitter account, the presidential spokesman assured that guaranteeing social programs, the right to health and a decent life are essential to have that level of acceptance. 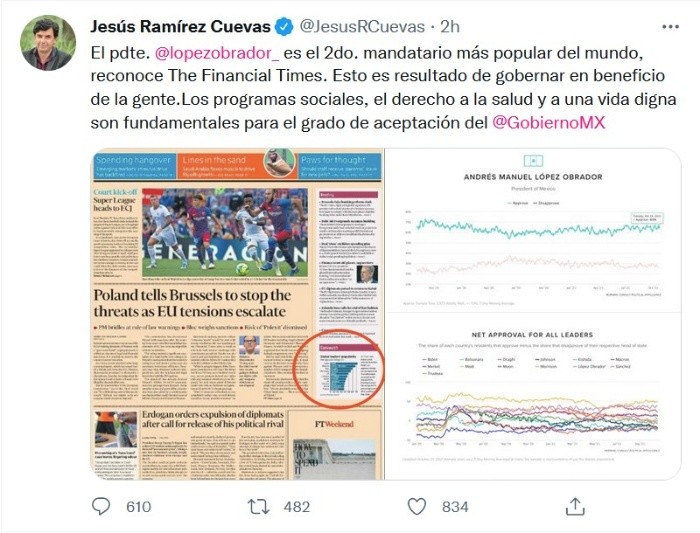 “President López Obrador is the second most popular president in the world, recognizes The Financial Times. This is the result of governing for the benefit of the people. Social programs, the right to health and a decent life are fundamental for the degree of acceptance of the government of Mexico, “he wrote on the social network.

According to the English newspaper, López Obrador was only surpassed by his Indian counterpart, Narendra Modi, but above leaders such as Joe Biden, president of the United States; Emmanuel Macron, of France, or Justin Trudeau, Prime Minister of Canada.