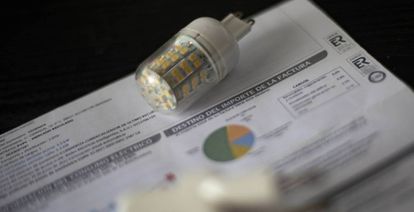 A light bulb, on an electricity bill.Europa Press

The upward spiral in energy prices has not only become a drag on households, but also for dozens of independent electricity traders that entered the market with liberalization and who have seen how the recent costs they had to bear in the wholesale market questioned its financial capacity and jeopardized its viability. The National Commission of Markets and Competition (CNMC) warned weeks ago about a cascade of bankruptcies, such as the one that has already occurred in the United Kingdom, although it assures that it has not yet opened any disqualification file about this year, in the that is concentrating the bulk of the rise.

The problem faced by independent companies due to their limited financial muscle is twofold due to the increase in megawatt hours (MWh), which has doubled from the beginning of summer until today and almost five times the values ​​of a year ago. This Saturday the price will be 211.2 euros per megawatt hour. On the one hand, the price increase penalizes them more harshly in the period that elapses between the acquisition of energy and the collection from their customers. On the other, they are powerless in the face of the guarantees that they must present in the daily and intraday market to cover the purchases they make, which have to cover between 7 and 12 days after the operation. And in most cases they do not have the backing of the generation business with which to compensate for their weaknesses in the marketing branch: without this natural coverage, the options to mitigate the blow are reduced.

“What has surprised me the most in this storm is to see that so many traders were not covered against the risk of a price increase. There can be a lot of bankruptcies, as has already happened in the United Kingdom ”, points out Pedro Linares, a professor at the University of Comillas and a good connoisseur of the electricity sector. “At first I was one of those who believed that this was going to be temporary, but there are many more companies than I thought were in a critical situation.”

In Spain, the number of marketers has tripled in the last 10 years and many small companies have entered this process, “many of them without the necessary financial capacity to withstand a blow like the one that comes now,” explains José María Yusta, professor at the University of Zaragoza specialized in energy markets. According to their figures, of the nearly 400 electricity companies that are active today, “dozens” are in trouble. “We can see many bankruptcies: all those that do not have a generation branch and that have not been protected with futures contracts are at risk. It is no longer just that they are paying higher prices in the wholesale market, it is that the cost of guarantees to do so has also risen a lot and is financially suffocating them ”.

That last obstacle is the one that the CNMC tries to partially solve. At the behest of the market operator (OMIE), on Thursday he issued a resolution proposal with which he wants to limit the need to present those guarantees, as long as the marketers are capable of advancing part of the settlements for the purchase of electricity. The advantage of this half-solution is that it would not force them to cover as much money up front as with the current model. The most serious is the argument with which the regulator makes its decision: “Putting the viability of many of these entities at risk.”

The fall of one of these small-size marketers should not be a major headache for customers: after their bankruptcy, they will automatically switch to the so-called reference marketers: Iberdrola, Endesa, Naturgy, EDP or Viesgo (today Repsol) basically, depending on your place of residence. Although they would automatically jump from the free market to the regulated tariff or PVPC scheme —the cheapest in the long term—, they could then return to any other free market if they so desired. In the meantime, however, those who would benefit the most from the fall of the small trading companies that entered the sector with the 1999 liberalization would be those benchmark electricity companies.

Consulted by this newspaper, neither Iberdrola, Naturgy, nor Endesa admit to having taken on clients yet. The CNMC assures, for its part, that it has not carried out disqualification procedures for cases that have arisen this year, which tend to be slow, so that the closings have not yet come hand in hand with the rise in the price of energy. And an OMIE spokesperson, who is aware of who participates and who does not participate in the market every day – and, therefore, is the first to record a bankruptcy – refers to the Ministry for Ecological Transition.

A problem that runs parallel to the price of electricity

The financial difficulties of these companies became especially pressing when the price of the megawatt hour exceeded 100 euros, at the beginning of July. Almost four months later, however, with the cost already clearly established above 200 euros, the difficulties are increasing. In many cases it is, above all, a problem of treasury tension: they have to advance payments much more onerous than before the price increase, including that of energy, long before receiving a single euro from the clients. A lag that is usually around 40 days but, according to Yusta, can reach 60 in some cases.

“Some were overconfident that the price [en el mercado mayorista] it would not rise and they have assumed a significant risk ”, points out Óscar Arnedillo, director of the energy consultancy Nera. “It all depends on the level of coverage and the financial muscle that each one has, and that is not public,” he says. Also of the existence or not of clauses in the contracts with the end users that protect them in case of a sudden increase in price in the wholesale market, as now. “We have revisable rates for our users, and that protects us: when the price goes down in the wholesale market they go down and when it goes up, they go up. The one who is suffering is the one who cannot review prices, especially the smaller companies ”, points out a directive from the sector on condition of anonymity, while acknowledging the“ bad moment ”that various competitors are going through.

No margin for action

“We have no room for maneuver, because if we do not comply with market regulations, the distributor denounces the CNMC and it resolves a possible disqualification,” explains Lorena Quiñones, from the financial department of the Som Energia consumer cooperative. To overcome the current situation, this entity with some 130,000 contracts in charge has opened a process of issuing capital stock to raise up to 15 million euros, a need calculated on the basis of the worst-case scenario that they believe can be had by the end of the year : market prices of 300 euros per MWh, a figure that few believe will be achieved right now. Quiñones explains that the price jump has caused the cooperative to have to advance 2.5 million euros each week, compared to the half million that it previously put, to cover the time between the purchase of electricity in the wholesale market and the collection from Your clients. But it also underlines that it is not possible to speak of losses, but of cash needs to cover the lag.

“Bills that were previously 50,000 euros per week, now, after the rise in the price of electricity, are 250,000,” says Jorge Morales de Labra, director of Próxima Energía, one of the marketers that is being able to weather the storm thanks to the coverage of the future price of electricity and the credit lines available, which allow you to avoid the tight cash flow between the time you have to pay the bills and the time you they charge from their customers. “Every five weeks there are 1.25 million that we have to anticipate. We have backs and financial backing, but others do not. And, also, even if you have the money, it is not normal that we have to dedicate it to this and not to put solar panels, for example, “he criticizes, in an argument with which Quiñones agrees.

While troubled traders are looking for new financing lines that allow them to weather a price spike, which should normalize – at the latest – as of next spring, others have already announced that they will take advantage of the weak moment of their rivals to announce acquisitions. The objective: to keep the client portfolios before they automatically go to the big ones. The law of the most resistant is imposed; nobody wants to be left out of the picture when the waters return to their course.