This week we had a great day with Nissan and the pretext to visit the Aguascalientes A1 plant was unbeatable: a track day, including a visit to both factories. With more than 1.8 million square meters, the imposing factory stands about eight kilometers from the hydro-warm capital and here we toured its most interesting corners.

To get started, cars like the Versa, March and Kicks are built in this assembly plant, mainly, as well as different versions of engines (which by the way, recently manufactured the block number 15 million), mostly for export markets.

Without the obvious din that received us in previous years, in the midst of the pandemic the factory works “quietly” despite the effects of the lack of chips that has impacted the construction of cars worldwide. The assembly processes continue at a good pace, the movement of the employees continues its back and forth and the maneuvering yards looked full of cars ready to be transported; And that will always be good news for those who work there, as well as for the industry.

On the Aguascalientes A2 plant, we went around to remember that since 2013 it is one of the most modern of the brand, where more than 1.2 million Sentras have been produced (in model history) and that it was built in a record time of 19 months and an investment of two billion dollars, and it must be remembered that the Sentra was manufactured from 1995 to 2018 in Aguascalientes A1.

On the other hand, in the same A2 we learned about the space where thousands of face masks are manufactured to deliver mainly to its plants, employees and with scope in the region. 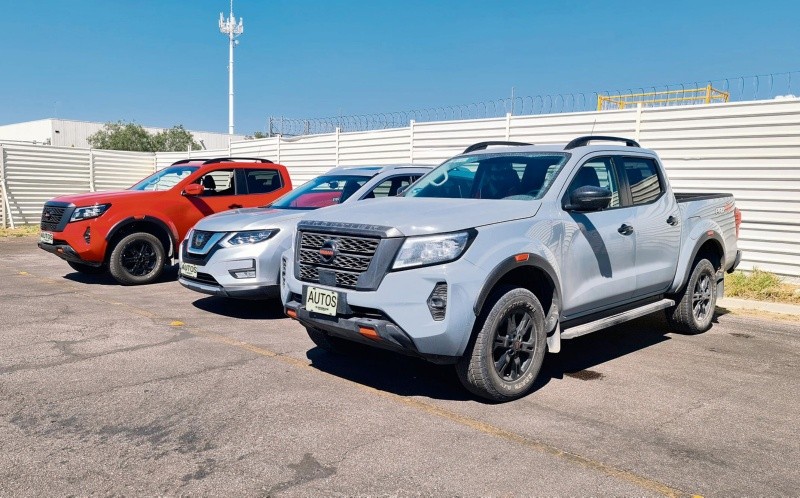 We were able to drive the brand’s pikcups and SUV’s, showing off its durability and technology. THE INFORMER / M. Castle

Time to have fun

One of the spaces that we did not know within the A1 floor is the test track, which is divided into different sections along its little more than 4 kilometers, as a space focused on durability where we drive the new Frontier PRO-4X, and we put its suspension to the test (with a smooth ride on very difficult surfaces) as well as testing its 4×4 system and descent control. We did the same with an X-Trail, but obviously the jolts in a truck like this were greater given the demands of the road.

On the other hand, the Nissan March was really demanded in a handling test but above all it was “mistreated” and taken to another level with a test pilot, where we made 180 ° turns, untimely accelerations, drifting, among others, with a funny result. This despite not having a stability control, but that will soon be incorporated, according to Nissan.

And finally, on the acceleration track We drove “Godzilla”, that’s right, the GT-R was in our hands for a few laps and we were able to drive it in a controlled way at a top speed (by internal plant regulations) of 140 km / h to take banked curves that initially imposed, but later turned out to be very fun, with a 30 ° incline. In this one, we also tested cars like the very comfortable Altima, the outrageous 370Z and the surprising Leaf with its initial start as a “mule kick”.

Another very special car that we met, but could not drive, was the GT-R 50 Anniversary, with its spectacular Blue Bayside Blue color (inspired by the Skyline GT-R / R34) with a V6 biturbo engine that generates 565 HP. Of course, it is a unique car in Mexico and it is not for sale.

Together, we spent a great day with Nissan at its facilities in Aguascalientes, in a coexistence with its cars and friends of the brand, to celebrate the first 60 years of the Japanese firm in Mexico. Congratulations.

Is the situation still tenable for Claude Puel at the head of ASSE?

Alec Baldwin did not know that the gun contained live ammunition

“Belgians too often got the message: go for the lowest price”: how could it come to this with the Flemish energy supplier?

Constellation Brands to build plants in Mexico after controversial suspension

Hass avocado from Jalisco may be exported to the United States

Tourism in Mexico will recover in 2022, predicts Moody’s

Alec Baldwin did not know that the gun contained live ammunition