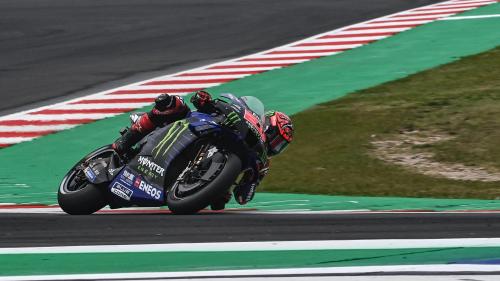 He admitted to having taken “a very, very big step” on the way to the Moto GP World Championship title, after his second place in Austin three weeks ago. However, Fabio Quartararo suffered a little hitch on a wet track for qualifying for the Grand Prix of Emilia-Romagna on Saturday 23 October, by not reaching the second round of qualifying. The French (Yamaha) will therefore start in 15th position on the starting grid.

A poor performance for Quartararo, eliminated in Q1 for the first time in his young career in MotoGP. The Niçois was trapped by his rival Francesco Bagnaia, who played his game by printing a very intense pace and who will start from pole position. As a result, Quartararo was too cautious on the wet fat part of the circuit. A tour was canceled. Iker Lecuona finished second, just ahead of the Frenchman, and accompanied Bagnaia in Q2.

Not necessarily comfortable on wet tracks, Quartararo and Bagnaia failed somewhat during free practice. Absent from the top 10, they were both forced to go through Q1, a rare occurrence for drivers of their stature. A Q1 which was fatal to the French …

Johann Zarco was present in Q2 and will start in tenth position on Sunday. A small disappointment for the French driver, in sight during free practice but who fell at the end of the course. Jack Miller, Bagnaia’s teammate, will start in second position.

Due to a yellow flag infringement in Q1, @FabioQ20‘s best lap has been cancelled! ❌

In the standings, Quartararo remains close to making history. With 254 points in the standings, the Frenchman is 52 units ahead of Francesco Bagnaia. Despite this downside, he could be crowned on Sunday, if he finishes ahead of the Italian or just behind him. The feat would be colossal, since no Habs have ever been titled in the discipline. But starting in 15th place, it would take a little miracle to see Quartararo triumph on Sunday. Is El Diablo capable of it? If he is not sacred in Italy, he will have two more appointments to finish the job, in Portimão in Portugal on November 7, then in Valencia (Spain) a week later.

Meadow Walker, Paul Walker's daughter, gets married and Vin Diesel walks her down the aisle