Geurts: ‘It’s great that I show that you can get better with age’ 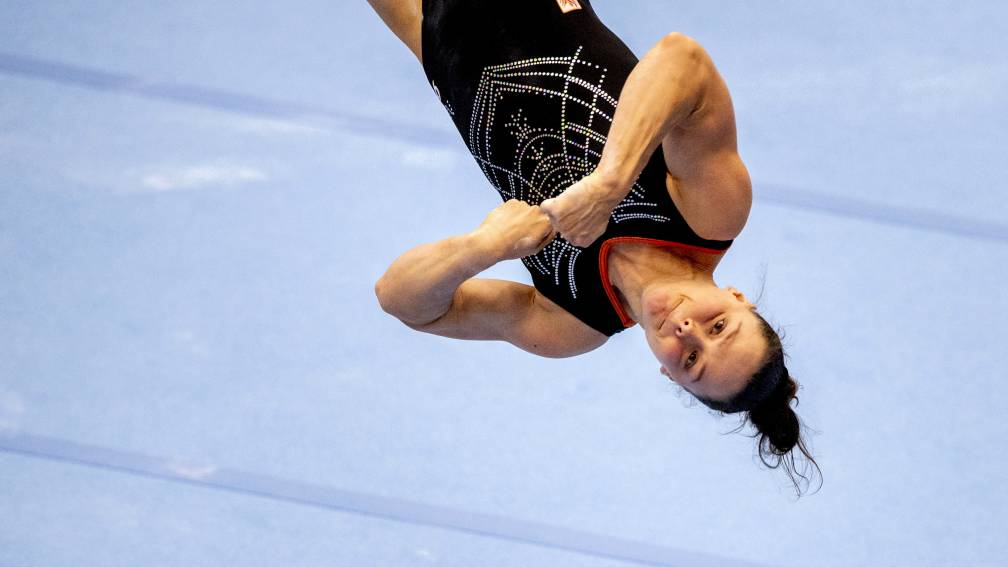 For 45 minutes, the time between the very first and the very last jump in the final of the World Gymnastics Championships in Kitakyushu, Elze Geurts hoped for a stunt of biblical proportions. Would she, late bloomer and unlucky at the same time, finally receive a salary for seventeen years of work during her debut at a World Cup?

A medal was certainly a possibility on Saturday for the 26-year-old gymnast from Turnz in Amsterdam, who surprisingly placed second in the qualification for the final battle. It justified the dream that she could finally reach the podium after all.

Shortest way to a medal

After all, wasn’t such a post-Olympic World Cup, which is not on the agenda for most world toppers, for gymnasts of Geurts’ caliber the shortest (and only) way to a medal at a global title tournament?

For Geurts, however, the route to the honorary scaffold was strewn with stings. After her first jump, which with a score of 14,366 could more than withstand the test of criticism, the debutante who started eighth had to reach the very last jump of the final battle.

It was all or nothing for the gymnast, born in Raalte, if she wanted to be crowned ‘best of the rest’ behind the unapproachable Rebeca Andrade. The Brazilian Olympic champion, who came into action second, had already largely disappeared from the picture for the other finalists with an average score of 14,966 points.

From her repertoire, she opted for a full-twist cross-over somersault, an exercise she did frequently during training, but for which she lacked experience on the competition floor.

Geurts nevertheless opted for the risky jump, but did not see that courageous choice rewarded. She fell forward on the blind landing, knocking all the ground out from under her feet in one fell swoop. With a rating of 12,333 points, her average score dropped to a total of 13,349. Once again, hope turned out to be little more than quicksand.

Dutch gymnasts and World Cup finals on the jump, it is and remains not a happy marriage. During Antwerp 2013, another debutante was also not allowed to get the best out of herself in the battle for the medals. Eight years ago, the unfortunate Chantysha Netteb left the Sportpaleis after her first jump on a stretcher.

The fact that Geurts had qualified for the final in Asia already felt like a victory in itself, she confessed afterwards. For a long time gymnastics seemed first and foremost a matter of coming back from another injury.

As a medical student, Geurts has a medical file that she can use to her heart’s content. She broke metatarsals, fingers and toes, suffered from chronic back and shoulder injuries, and tore both her right and left Achilles tendons.

And now, all of a sudden, she stood in excellent form and health amid the best eight jump specialists in the world. “Qualifying second for the final was a bigger shock than falling here.”

“I came to Tokyo for a place in the last eight. Two weeks ago it looked like something like this was going to be very difficult. That I managed to do that was a huge surprise. I like that I showed that in old age, as we call it, you can still get better.”

Standing in the final with big names such as Olympic champion Andrade and world champion in the all-around Angelina Melnikova felt almost unreal to Geurts. It was a nice end to what she described as “a difficult year,” she said. “Very very fat.”

“I did not gymnastics at the European Championships and was reserve for the Tokyo Olympics. I was always just against it. If you finally achieve what you dream of all your life, gymnastics for a World Cup final, that is a cherry on top the pie.”

In the coming months, her focus will be on completing her thesis and completing a number of internships. Then she returns from the infirmary to the gymnastics floor. The 2022 European Championships in Munich are the first step towards the 2024 Summer Games in Paris.

Because Geurts continues to dream her Olympic dream unchanged. What prevailed in Japan was a mixed feeling, with the balance ultimately turning positive in her opinion.

Of course, it sounded with a great sense of understatement, her second jump could have been a little better. Laughing: “I’ll save that for next time.”

The underhand service, a weapon that is still taboo