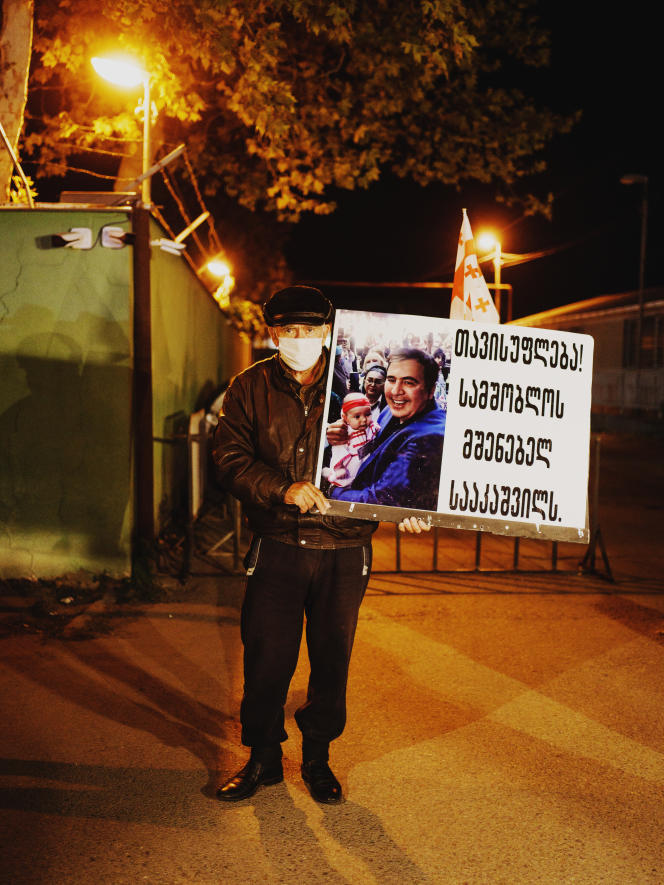 In front of prison number 12 where Mikheil Saakachvili, the former Georgian president has been imprisoned since his return to Georgia. A supporter of Mr. Saakashvili holds up a sign in front of Georgian television cameras: “Freedom! for Saakashvili the builder of the fatherland ”. Roustavi, Georgia, October 19, 2021. JULIEN PEBREL / MYOP FOR “THE WORLD”

The three yellow, pink and red poufs are enthroned in front of the prison entrance. Considering the time Badri Nemsadzé spends here, he needs a little comfort. Since learning that former Georgian President and opposition leader Mikheil Saakashvili had been jailed upon his return to the country after eight years in exile on October 1, the 54-year-old man has been staying day and night in front of the grids as a sign of support. His hero is nearby, in one of the buildings behind barbed wire. “This is a historic moment for Georgia,” he said. Micha (Saakashvili’s nickname) represents Western values, democracy and freedom of expression. If he is not released, this country has no future. “

Read also Article reserved for our subscribers Former Georgian President Mikheil Saakashvili, in prison and on hunger strike, tells “World”: “I am ready to go to the end”

Protesters gather here every evening to demand the release of the former leader, sentenced in absentia to six years in prison in 2018 for “abuse of power”. The person concerned, who considers himself a “political prisoner”, went on hunger strike upon his arrest. Since then, Georgia has lived to the rhythm of information on his state of health and controversies over what he would have swallowed. Did he put honey in his tea? The government immediately declares that it has eaten “half a kilo of honey”, prompting the prisoner, who denies it, to further intensify his hunger strike.

The opponent, 53, has already lost 15 kg to 17 kg in twenty-one days, according to his statements to the World. Impossible, however, to know exactly, assures his personal doctor, Nikoloz Kipchidze, returned from the United States to ensure his follow-up. “The scale gives a very different weight from day to day,” he explains. This quirk questions him, as do the two diabetes tests his patient underwent. “It’s very strange: why two tests? And why without my having been informed? »Suspicious, he fears that one seeks to discredit the opponent. Same suspicion towards the psychiatrist who follows him: “I grew up in the USSR, I know how psychiatrists treated dissidents. I’m afraid they’ll do the same, ”he said, considering himself“ the only one trying to be objective ”in this country where“ everything is politicized ”.

Mikheil Saakashvili, head of the main opposition party, the United National Movement, has started his third week of hunger. A critical threshold. “His condition can deteriorate suddenly every second, worries the doctor. He is very pale and goes to great lengths to be strong. But in the evening, it’s something else. The former leader of the “Rose Revolution” (2003) could be hospitalized any day.

You have 58.54% of this article left to read. The rest is for subscribers only.