On the Atlantic coast, a proliferation of octopus since spring 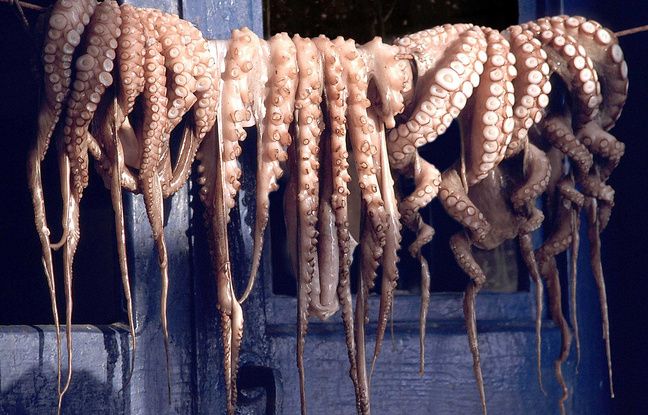 From Brittany to Charente-Maritime, it’s the year of the octopus! In La Rochelle (Charente-Maritime) when the fishermen return to port, they all draw the same observation: whether they have fished near the coast or off the islands of Ré and Oléron, sea bass, le maigre, whiting or skate disappear under the octopus.

“Last year, we went up three or four octopus in the fishing season, at the auction we saw a ferry pass here and there,” said Philippe Micheau, president of the departmental fisheries committee of Charente-Maritime. But “since the spring it’s been an explosion. Considering the quantities that the boats bring ashore, it must be thick at the bottom. I’ve been a fisherman for over thirty years, I’ve never seen that, ”he adds.

More than 27 tonnes caught this year

“Before, it was mainly the trawlers who fish offshore who relied on it. Now, there are also in the “slits”, between the islands and the mainland, an area which acts as a nursery for fauna, whether crustaceans or shellfish.

However, the octopus is particularly voracious, says Paco Bustamante, researcher in ecotoxicology at the University of La Rochelle, “it can have an impact on molluscs – mussels, clams, oysters – and crustaceans such as crabs and spiders”.

Between 6 and 8 euros per kg

In Brittany, where the octopus population is also important this year, this poses a problem for trap fishermen. On the other hand, net fishermen are doing well. “There is a market, so it’s interesting,” said Pascal Bouillaud. Octopus sells for between 6 and 8 euros per kg. While France is not a major consumer, Italy, Spain and Portugal are supporting demand.

This return of the octopus does not delight the three Michelin-starred chef from La Rochelle, Christopher Coutanceau, who had “withdrawn it from the menu because it was in distress here in recent years”.

“We win a species but we risk losing several because the octopus devours everything”, sighs this activist of sustainable fishing. “They attack lobsters and lobsters even in the traps. The scallop season, which is about to begin, could be compromised. I caught one last week, he had eaten scallops! “.

Why such an abundance of octopus? Paco Bustamante has no explanation. This cousin of the octopus has a short life, two years maximum. So it develops very quickly. “A cold year, with low temperatures, there aren’t too many octopuses,” explains the researcher. “But a milder year, like winter 2021, we see a great survival of the larvae. And if there are fewer predators such as bass, skinny or seals, it favors the survival of the new generation, ”he adds.

But he puts the phenomenon in perspective. “This year, the catches are very important but it is still not a locust invasion! “, And” it’s not really new. Octopuses were very numerous in Atlantic waters in the first half of the 20th century. We don’t really know why their population declined in the second half ”.