Apple’s crazy race to create the iPod, which turns 20

From our correspondent in California,

“This extraordinary little device has 1,000 songs on board. And it fits in my pocket. Just twenty years ago, on October 23, 2001, Steve Jobs walked the talk and unveiled the iPod, an MP3 player with a futuristic design the size of a deck of cards. He doesn’t know it yet, but Apple will sell over 400 million, shake up the music market, and become a consumer electronics titan. Nothing would have been possible without an incredible sprint, with a product designed, manufactured and launched in less than a year. An engineer and a creative who took part in the adventure tell it to 20 Minutes.

Summer 2000. Eminem / Slim Shady sweeps across America. Destiny’s Child, Aaliyah, NSYNC and Britney Spears take pride of place on the charts. Music piracy is exploding on Napster. The Internet bubble is imploding. Apple, then called Apple Computer, wanted to make the iMac the heart of digital life for users and saw in these tumultuous times the opportunity to tackle music. Because the MP3 players of the “suck” era, repeats Steve Jobs. They are bad “. On the one hand, compact Flash memory devices, which embed 15 or 20 songs, such as the Rio PMP300. On the other, tanks with hard disks like the Jukeboxes from Creative and Archos, with limited autonomy and portability. 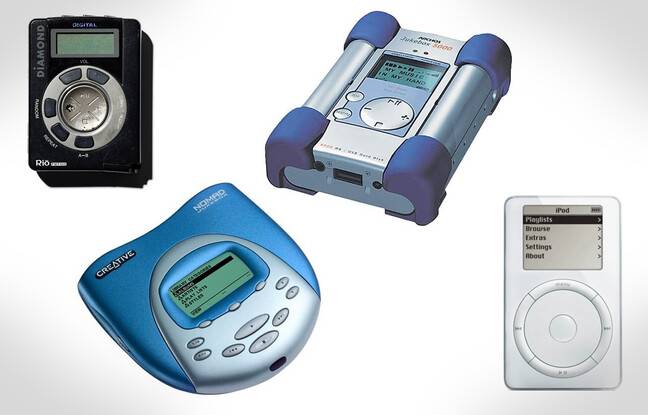 According to legend he told the Computer history museum, Jon Rubinstein, vice president in charge of Apple’s hardware division, visits a Toshiba factory in Japan in the winter of 2000-2001. He was presented with a 1.8 inch (46 mm) 5 GB mini hard drive. The Japanese firm did not know what to do with it. Rubinstein holds his missing piece. He calls Steve Jobs and asks him for a check for $ 10 million. He leaves with an exclusive contract.

Rats in the building

It remains to build a team. All the stars of Apple are busy with important projects. The company is therefore looking outwards. Tony Fadell, a former Philips employee, then worked on an MP3 player project but struggled to convince partners. He was on the ski slopes when he received a phone call from Jon Rubinstein in January 2001. He took charge of the project as a consultant. Michael Dhuey, a mechanical engineer from Apple, is initially alone in charge of the bowels of the beast. He tells 20 Minutes:

“We were in a secret building far from the main campus. We worked 10 hours a day, often Saturdays and Sundays. We had food delivered. For security reasons, cleaning staff had limited access. The trash cans accumulated so much that there were rats in the building ”.

The engineer faces a challenge: Toshiba’s hard drive is fragile and drains the battery. The solution ? Temporarily transfer a song to a DRAM chip (random access memory). Enough to achieve 10 hours of autonomy while avoiding the music “skipping” during a jog. He also remembers having to push the volume to the maximum because “Steve Jobs suffered from a slight hearing problem” … without exceeding the limit of 100 dB in force in some European countries, including France.

To accelerate development, Apple is forming partnerships for certain components and the software part, mainly with PortalPlayer and Pixo. Prototype after prototype, the team of Jony Ive, the chief designer of Apple, reviews its copy. Phil Schiller, the boss of marketing, has the idea of ​​a control with the “click wheel” to scroll through playlists at high speed. All that is missing is a name for the device.

“The name was almost secondary.” Steve was mostly concerned about the Apple Stores that had just opened and the launch of the iMac G4, ”says Vinnie Chieco, a freelance copywriter called in for reinforcements. The white of a prototype reminds him of science fiction, especially 2001, The Space Odyssey. He brainstorms and keeps Jobs’ vision in mind: the G4 is a digital hub, and the music player its satellite.

The big pitch takes place in a conference room. Hiroki Asai, then creative director, is present with two other employees and Vinnie Chieco. Steve Jobs, seated on the other side of a huge conference table, flips through the proposals and makes three piles: “Worst name I’ve heard in my life”, “not terrible” and “not bad”. The latter notably includes the “Troubadour” proposal. Steve Jobs doesn’t like any. He suggests an idea of ​​his own, a name to which he is particularly fond. That of an artist he appreciates – that Vinnie Chieco prefers not to reveal out of respect for Jobs, who died ten years ago. The reactions are polite. No one wants to criticize the proposal of an angry boss.

The creator then leans over to fetch a leaf from one of the wrong piles. His colleagues are convinced that he is in the process of signing his career death warrant. He explains his analogy: the iMac G4 is the flagship, and the exploration pod will be… the iPod. He repeats the famous line from Stanley Kubrick’s film, “Open the Pod bay door, please HAL”. It precedes the rebellion of the on-board computer, which refuses to execute (“I’m Sorry, Dave. I’m affraid I can’t do that”).

The idea caught on in Steve Jobs’ mind in three weeks. He asks Apple’s lawyer to file the name and wants to present the iPod on October 14. But Jon Rubinstein has a slight scheduling problem: his marriage. His boss agrees to postpone the ad for a week.

The success is far from immediate. Journalist Walt Mossberg praises “Apple’s flair” for the design and simplicity of the experience, but judges the iPod “a bit expensive” at $ 399. But the main obstacle is elsewhere: the iPod only works on Macs, and Apple sells only 3 million per year. That’s 50 times less than PCs. Jon Rubinstein and Phil Schiller insist: “We need the PC. Steve Jobs refuses, convinced that users will migrate to the Mac thanks to the iPod. The two executives returned to the charge. “Fuck you, do whatever you want! Steve Jobs gives in. For the second generation of iPod, in 2002, Apple entered into a partnership with MusicMatch to transfer music to PC, before bringing iTunes to Windows the following year. Steve Jobs knows that the key to success is through content. And iTunes does not yet have a store to sell music.

Paul Vidivich, vice-president of Warner Music, receives a first phone call in 2001. The boss of Apple explains to him that the success of Napster is due to two factors: a complete catalog and the simplicity of the experience. Vidivich shares his analysis. Warner and Apple are working together to develop a store with songs protected by digital locks, DRM, which limit transfer to other devices in order to fight piracy. “The other majors were pushing for more stringent protections, but we knew that we had to strike a balance with the user experience,” Vidivich assures us. Which suggests, he claims, the price of 99 cents per song.

The contract was signed in November 2002. Universal was quickly convinced, Steve Jobs explaining to the majors that Apple was only going to have 2% of a market still largely dominated by CDs. The experience, with a one-year contract, is therefore risk-free. Sony, the father of the Walkman, which then still tries to impose an alternative format to MP3, drags its feet and then capitulates. “Steve Jobs pitted the majors against each other. It was impossible to stand apart, ”summarizes the former leader of Warner.

iPod, PC, iTunes store… Everything converged in 2003. The Chiat / Day agency launched its advertising campaign black silhouettes / white headphones / colored backgrounds, with freestyle dancers on rock hits like Are You Gonna Be My Girl by Jet .

The success is global. David and Victoria Beckham are photographed by paparazzi with an iPod. Sales exploded in 2005 with 22.5 million copies. The iPod then represents more than 40% of Apple’s profits. The launch of the iPhone follows in 2007. Apple abandons the “Computer” of its name. The rest is history.