“Getting into someone’s closet is something so intimate,” actress Emilia García Elizondo, granddaughter of Nobel Prize winner Gabriel García Márquez and his wife Mercedes Barcha, tells EL PAÍS after two and a half months of dusting, exploring, and classifying the wardrobe of her grandparents. García Elizondo speaks Wednesday morning in the internal garden of the house where ‘Los Gabos’ lived for decades in the Jardines del Pedregal neighborhood of Mexico City. On a terrace there, the granddaughter has put up for sale more than 400 pieces of the couple – coats, dresses, bags, shoes, boots, ties or handkerchiefs. “Los Gabos left a lot of clothes, and we didn’t know what to do with them,” he admits.

The Gabos house was left without its two guests last year, after Mercedes Barcha passed away in August – García Márquez passed away in 2014 – and since then the family has been working to transform it into a new cultural space. It is not a museum but a space dedicated to art called ‘Casa de la Literatura Gabriel García Márquez’. The first event open to the public to get to know the iconic house of Gabo and Mercedes is this sale of their closet in Mexico – a semi-public event because you must make an appointment to attend by Instagram account in the coming days. But on Wednesday morning some close friends of the couple were invited to start looking at what the García Márquez wardrobe has to say.

The granddaughter, in charge of the initiative, says that they selected for sale what was in good condition or what they considered iconic. “What most reminds me of Gabo, definitely, are the bags of tweed“, He says. There are about thirty of those iconic coats for sale that Gabo wore on cold Bogotá mornings or Mexico City rainy afternoons. One of the most valuable, with black and white stripes, keeps internally a black spot that was left when one of the Nobel pens exploded in his pocket. “It also happened to us that we opened a sack and found a pen from him to sign his books,” said the granddaughter, showing the down on a coat. sharpie that the Nobel left abandoned.

There was something from Calvin Klein, Armani or Hugo Boss in Gabriel García Márquez’s closet. But his, rather, were the tailors. “A lot of what is in the closet are things sent to do. They were sent to make shirts that had long bags for glasses or pens ”, says the granddaughter. In Gabo’s huge library there is a table on which are displayed some of these shirts with the names of the tailors he liked to frequent. ‘Raúl González: Camisario’, say several of these. Others say ‘La Camisería’ without naming the tailor’s name. “He also had a [sastre] His name is José Mejía, who we believe is Colombian, and some of his shirts are made in France, others in Colombia, others in Italy ”, adds García Elizondo. The granddaughter decided not to sell a coat made to measure for her grandfather by the tailor Emilio Velarde Rodríguez in which the Nobel laureate signed his name in blue ink on an internally woven patch, in addition to putting the date on which he acquired it, March 30, 1983, as if marking a book. “I can’t this one,” says her granddaughter as she looks fondly at the coat on display in the house. 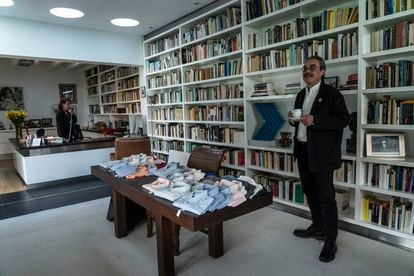 Gonzalo García, son of the writer, in the family library.Gladys Serrano

García Márquez was not a fashion icon but he was not someone who looked down on her. When it was announced that he had won the Nobel Prize in 1982, one of the first things he said publicly was that he hoped to be able to wear an iconic suit from his homeland. “I hope to be there in Guayabera,” he said then. “The obligatory dress is the tailcoat, but they accept that the Hindus wear their national dress. I am willing to show that the guayabera is the national costume of the Caribbean and that I have the right to dress like that. As long as I don’t wear a tailcoat, I am able to endure the cold ”. Finally he went with a liquilique, a traditional costume from the Llanos, the plains that unite Colombia and Venezuela, and a tribute to his grandfather (a colonel who was much closer to the Nobel Prize than his father). “His war liquiliques and his white linens as a civilian colonel looked like him as if he were still alive inside them,” Gabo wrote about his grandfather’s clothes in Live to tell.

The famous white linen suit from 1982 is not for sale in Mexico City: it is a well-kept jewel in the National Museum of Colombia, in Bogotá. Nor are his iconic ruanas – like virgin wool ponchos – for sale that were left at his home in Colombia. But it is in Mexico, instead, what Mercedes Barcha wore to the Nobel ceremony: a beautiful emerald green dress with black leaves of thick fabric falling towards her feet. That one, however, is not for sale either. It is only on display along with dozens of dresses that Mercedes kept for decades.

“From the beginning it was possible to see all the times that Mercedes went through,” says her granddaughter, referring to the dresses and the change in tonality she noticed in them. “It goes from her most colorful dresses to her most sober jackets at the end. [de su vida]”. Mercedes, in the exposed closet, kept dozens of long indigenous dresses that she collected in different parts of Mexico, as well as several typical backpacks of the Wayúu peoples in Colombia. Next to these, she also kept several Louis Vuitton bags and dresses from an Italian fashion house: Marina Rinaldi. “Mercedes I think she had a great obsession with Marina Rinaldi,” says the granddaughter. In the sale a dozen of them are exposed, from light to dark colors, in addition to the silk stockings that he used and cataloged in his closet. ‘Dior 1988 brilliants: brown-black’, she wrote on the box of one of these. Thirty-three years of Dior tights that Mercedes never opened and are now on sale to literary fashionistas.

The proceeds from stockings, coats and dresses will not go to the Gabriel García Márquez Literature House but to the FISANIM Foundation, led by Mexican actress Ofelia Medina and which focuses on combating malnutrition of indigenous children in states such as Chiapas and Guerrero. “I was like 17 when I met Gabo,” Medina tells EL PAÍS, one of the special guests this opening Wednesday. “He wrote like in 1967 the first plot of my first movie, Patsy, my love“, And around that time he finished One Hundred Years of Solitude. I was one of the first people to read the novel. Medina stayed close to the family and one day this year she received a call from her granddaughter telling her about the donation that would come from selling Gabo’s ink coats or her shirts marked by different tailors. “And for me it was like yellow butterflies fluttering everywhere,” he says. There are not many yellow butterflies in the García Márquez wardrobe, but the stains of those feathers that the Nobel used to draw them half a century ago remained there, between coats.