The gas station that was right next to the town’s church, the church itself before which the Spanish kings heard the laments of those affected just a month ago, the La Laguna school, the supermarket, the football field … and the houses of hundreds of neighbors. One after another, the lava emitted by the La Palma volcano continues to engulf the vital projects of citizens and businessmen in its inexorable advance. This time, the tragic turn has reached the urban area of ​​La Laguna, one of the largest towns in the municipality of Los Llanos de Aridane. “Broken dreams and lost years”, according to the words expressed this Wednesday by the president of the Cabildo, Mariano Hernández Zapata.

The anguish of the evacuations have returned late on Wednesday. At night, the advance of the lava flows that threaten have forced the emptying of some 50 homes at 20:30 local time in the neighborhoods of Las Martelas in the municipality of Los Llanos de Aridane, and Marina Alta, Marina. Baja, La Condesa and Cuesta Zapata in the municipality of Tazacorte. Many of them had already suffered confinement recently. The residents of these neighborhoods, including quite a few elderly people, rushed to dump their basic belongings in cars and vans, coordinated by the Civil Guard and advised by workers from the Tazacorte City Council. “It had to touch us too … This is never going to end”, exclaims anguished Mariam González, a 76-year-old neighbor from Marina Baja. Her daughter and son-in-law have come from Los Llanos to help her get out of the house. “Take the basics tonight, tomorrow you can get more things again, don’t worry,” a municipal worker explains a few meters down the street to a German couple whose language and nerves have almost left them in a state of shock.

“These are tremendously hard times, and the symptoms do not show that we are near the end,” stressed at noon the President of the Government of the Canary Islands, Ángel Víctor Torres, who has underlined the efforts against the clock to ensure the distribution of housing to the affected population and irrigation to farmers. “We cannot say if the case of La Laguna will cause partial or absolute damage, we hope not,” he said. “We are at the mercy of the volcano, but we will do what is humanly possible to alleviate its damage.” The material damage can be quantified in numbers: 845.88 hectares destroyed and 1,122 buildings destroyed according to the Cadastre, 902 of them for residential use. 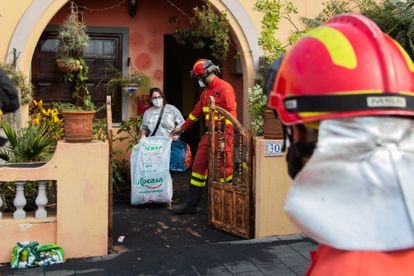 The data, however, do not quantify the distress of hundreds of neighbors. The urban area of ​​La Laguna, evacuated in three different operations since last October 12, is being attacked by two different flows, 8 and 10, according to the nomenclature of the Military Emergency Unit. The technical director of the Volcanic Emergency Plan of the Canary Islands (Pevolca), Miguel Ángel Morcuende, has explained that from them, in addition, a “much more powerful in calories” appendix has been detached, which is the one that at 14:30 local time has devastated service station. “This wash has grown during the morning,” says the spokesman: “It has been quite fast.” Lava, when it is separated “from areas already threshed, already destroyed”, what it does is “accumulate solids and communicate a lot of heat to the ground” through which the lava flows. Consequently, they lose speed and gain in viscosity. This is what is happening in this area.

Morcuende has also referred to another laundry, the one that can reach the local school, a center that began the course with 160 students. In his opinion, “the best possibility” is for the group of streams “to go to the first trough that runs through the south of the mountain of La Laguna. The “worst” scenario, on the other hand, is that these languages ​​will take their way north of the mountain, towards La Laguna. “You can imagine that we would be facing a new undesirable scenario,” he said, especially due to the possible fall of the school.

The stream that runs through the south of the La Laguna mountain is advancing, and at the beginning of the morning it was 90 meters from the coastline, further away than that revealed yesterday by the volcanologists’ drones. “If the laundry reaches the sea, we will carry out a confinement, which is already prepared,” explained Morcuende. This confinement will affect about 3,000 people.

The earthquakes continue to frighten the local population. During the night, one of 4.9 kilometers located 37 kilometers deep could be felt throughout the island. In general, seismicity continues to be located, mainly, close to that of the first days of the eruption, that is, at depths between 10 and 15 kilometers, but “there are also earthquakes located at depths greater than 20 kilometers, which in the last hours continue to have a high magnitude ”. The good news is that there is no significant surface seismicity, which rules out the appearance of new eruptive mouths.

For at least the next 48 hours the northeast wind will predominate, which will dispose the ash cloud and sulfur dioxide towards the southwest of the eruptive focus (affecting towns such as Los Llanos, Tazacorte or Fuencaliente, three of the most populated points On the other hand, the expected position of the plume will suppose “a favorable scenario, both for the operation of the La Palma airport and for the rest of the Canarian airports”, according to Pevolca. The air quality is good in the whole of the island, and it becomes very good in areas far from the environment of the eruption. Arrival of fine ash on the island of El Hierro is not ruled out.