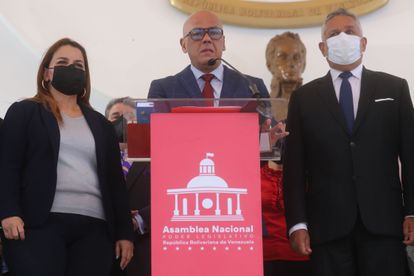 The president of the Parliament of Venezuela, Jorge Rodríguez, at a press conference this Wednesday, in Caracas.Miguel Gutiérrez (EFE)

The heads of the Congresses of Colombia and Venezuela intend to bring the two neighboring countries closer together, distanced by years of disagreements. The president of the National Assembly of Venezuela, Jorge Rodríguez, said on Wednesday that he had received a letter from his counterpart in the Colombian Senate, Juan Diego Gómez, in which he proposed to start a process of normalization of relations, broken since 2019 as a result of the political crisis that produced the irruption of Juan Guaidó and the siege of the opposition to the Government of Nicolás Maduro. However, Iván Duque almost immediately lowered expectations by reiterating that Colombia will not recognize the “dictatorship” while he is president.

Gómez’s letter was an idea of ​​the Colombian Senate, which unanimously approved on Tuesday the proposal of Congressman Jorge Guevara, of the opposition Green Alliance party, to form binational commissions that accompany the normalization of diplomatic and commercial relations. “It is a commercial issue that I would say is from border countries,” said the president of the Senate, of the Conservative party, defending that the initiative is a message for the Duque Executive.

Rodríguez, one of the fundamental leaders of Chavismo, has declared that his country has “full disposition” to restart a process “that allows normalizing” diplomatic, consular and commercial relations between the two countries, and also proposed creating mechanisms for verification and compliance with agreements. The scope of the initiative, which proposes to create a bilateral commission between the respective parliaments, still seems uncertain, against the background of two governments that constantly exhibit irreconcilable differences.

On the domestic front, Rodríguez’s unexpected announcement comes at a time when the Venezuelan opposition is once again going through a process of internal fragmentation, expressed, above all, in the distancing, and now confrontation, of the Popular Will and First Justice parties. Leopoldo López, Juan Guaidó, Julio Borges and other opposition politicians have recently been involved in a bitter tournament of recriminations and mutual accusations as a result of the Monómeros case, the Colombian petrochemical company owned by the Venezuelan State, administered by the opposition after the takeover of international assets. Guaidó, on which there are indications of improper handling and internal intrigues.

At the presidential level, Duque considers Maduro a dictator, and in turn the Chavista leader often accuses him of being behind all kinds of plots. “As long as I am the president of Colombia, and in defense of the democratic charter (…) we are not going to recognize it,” Duque reaffirmed this Wednesday, on the occasion of the visit to Bogotá by the US Secretary of State, Antony Blinken. In his statements, he described the Chavista government as a “shameful, corrupt and drug trafficker dictatorship.” The two leaders also remain at odds on the verbal and political terrain as a result of the Alex Saab case, exchanging serious accusations, in what has been a particularly stormy stretch of binational relations. On the geopolitical board, Colombia is one of the main allies of the United States in South America, and a platform to advance diplomatic initiatives potentially hostile to Chavismo.

Duque, who accuses Maduro of giving shelter in his territory to the dissidents of the FARC and the ELN guerrilla, responded in this way to the announcement of the binational legislative commission. The Colombian president has been the main promoter of the “diplomatic siege” on the heir of Hugo Chávez. In the midst of these tensions, Duque even took advantage this month of the commemoration of the bicentennial of the Constitution of Cúcuta, in the ruins of the historic temple of Villa del Rosario, just two kilometers from the border, to stage, once again, his unrestricted support Guaidó, whom he recognizes as the president in charge of Venezuela. Guaidó sent Julio Borges as his representative and read a video message. The protocol of Colombian diplomacy granted him the same treatment as the presidents of Ecuador, Guillermo Lasso, and of Panama, Laurentino Cortizo.

As the Colombian president redoubles his anti-Chavista rhetoric, signs are accumulating that point to a gradual reopening of the border, a long-delayed clamor from social and economic sectors on both sides of the border line. After Bogotá gave the green light to dialogue between the authorities and union leaders of the Norte de Santander department with Chavista leaders from the state of Táchira, Venezuela withdrew at the beginning of this month the containers that blocked the binational bridges. Despite these gestures, the “trade opening” decreed by Caracas has not yet materialized, pending the difficult coordination between immigration and customs officials.

To this amalgam of interests of national and local authorities, often at odds, is now added the role that the incipient legislative commission can play. “The congressmen have a dependency on the region, unlike the president. The pressure from civil society and unions is greater in the electoral race for the new Congress, ”explains analyst Ronal Rodríguez, a researcher at the Observatory of Venezuela at the Universidad del Rosario, in Bogotá. As Colombia prepares to go to the polls in the legislative elections in March and the presidential elections in May, Venezuela will have its parliamentary elections on December 6. “The last word in foreign policy is the President of the Republic,” Rodríguez recalls inviting moderation.

Subscribe here to the newsletter from EL PAÍS América and receive all the informative keys of the current situation of the region.

Fabra’s relief in Boca’s draw, after his responsibility in Godoy Cruz’s goal

Fabra's relief in Boca's draw, after his responsibility in Godoy Cruz's goal