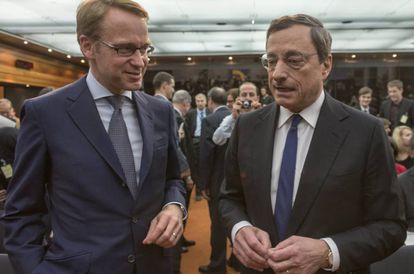 Magazine Foreign Policy He headlined in 2018 from Jens Weidmann, the resigned chairman of Budesbank, that he was “the most dangerous man in Europe.” He was then in all the pools to preside over the European Central Bank (ECB) and it seemed to the prestigious US publication that the candidate did not even believe in the role of a central bank. Not only had he opposed the extraordinary measures that saved the eurozone, but he also appeared to “reject the basic principles of modern macroeconomics and central banking”, wrote the economist Simon Tilford. His radical stance on monetary policy had earned him such fame, especially in southern European countries, that his application never came to fruition.

Weidmann, now 53, became the youngest president of the German central bank at just 43 years old. It arrived in the midst of the euro crisis. He replaced Axel Weber, who had left the institution suddenly after his candidacy to head the ECB was frustrated when the term of Jean Claude Trichet came to an end. Born in Solingen, North Rhine-Westphalia, Weidmann trained in Bonn and Aix-en-Provence, France, and after obtaining his doctorate he worked at the International Monetary Fund in Washington. Back in Germany, he was secretary general of the German Council of Experts on Economics, called the five wise men, who advises the government, and was later hired by Angela Merkel as an advisor. Among other things, he was in charge of preparing the chancellor for world summits.

The economist was the only member of the ECB who voted against Mario Draghi’s public debt purchase program in 2012. From the Bundesbank, he exercised persistent opposition to the Italian’s monetary policy, also based on low interest rates. He came to testify against Draghi before the German Constitutional Court, which ruled in 2013 whether the massive purchase of bonds in countries in crisis to stabilize the euro violated the German Basic Law. Weidmann will go down in history as the hawk par excellence, but it is often forgotten that it ended up supporting most of the stimulus measures that the ECB has been applying in recent years ”, points out Ángel Talavera, from Oxford Economics.

In southern European countries Weidmann will be remembered as a hawk that he only defended the interests of German savers and did not seem overly concerned about the future of the euro. Talavera assures that despite his fame there are other members of the ECB who “these years have positioned themselves more to the extreme than him.” And he adds: “He is an orthodox, but I think he understood that the urgency of the situation in the eurozone required exceptional measures and generally supported them, although it was not generally favorable to crossing certain limits or making certain support instruments permanent” .

Draghi was referring to him when he criticized the “no to everything” [”no a todo, en alemán”] with which the Bundesbank opposed its program to buy sovereign debt from countries in crisis. Weidmann was also known as Doctor No for his permanent disagreement with the Italian and his loose monetary policy of easy money. The outgoing president of the Bundesbank, says Talavera, has always straddled the more conservative role of spokesman for German criticism and that of a collaborator with Draghi’s measures, “although he sometimes reluctantly accepted them.”

Weidmann has asked the President of Germany, Frank-Walter Steinmeier, to be removed from office on December 31. He leaves office more than five years before the end of his eight-year term. “I have come to the conclusion that more than 10 years is a good measure of time to turn a new page, for the Bundesbank, but also for me personally,” he explained in a letter sent to central bank workers. In his farewell he also took the opportunity to issue a warning against the risk of inflation.

The resignation comes at a difficult time, in full negotiations to form a government in Germany after the September 26 elections. In theory there are two possibilities for his succession: the current vice president could replace him until the new Executive takes office and decides who he wants to propose in office, but Angela Merkel’s acting Chancellery could also name the candidate in the coming weeks. Merkel’s spokesperson has already cleared up the doubts. He said yesterday that “it is the task of the future Government” to find a successor “who will give continuity to the legacy of orientation towards the stability of the Bundesbank.”

Weidmann was a man of the Christian Democrats of the CDU, according to some analysts, who among the possible reasons for his departure suggest the lack of harmony with the next government of Social Democrats, Greens and Liberals. The German media are considering several names to replace him. The economist Isabel Schnabel, a member of the ECB’s board of directors, is one of them. There is also talk of Marcel Fratzscher, current director of the German Institute for Economic Research (DIW), who was previously head of international policy analysis at the ECB. And from Jakob von Weizsäcker, chief economist at Olaf Scholz’s Ministry of Finance; Jörg Kukies, also at the ministry, and Rolf Strauch, chief economist of the European Stability Mechanism (Mede). Nor is it ruled out that the vice president of the institution, Claudia Buch, makes the leap to first place.

The succession also occurs in a crucial phase for the ECB, which is discussing the future of the debt purchase program due to the pandemic. The chairman of the German central bank will also be Germany’s representative on the council, so the appointment may change the balance of power. “The hawks they lose an important voice, ”says Carsten Brzeski, chief economist at ING.

The meeting at the ECB to discuss when to reduce stimulus and how to adapt bond buying to the post-covid era is scheduled for December. Weidmann had been pushing for months, together with his Dutch and Austrian counterparts, to rapidly reduce the purchase of government debt.. Brzeski believes that inflation and an economy that returns to pre-crisis levels before the end of the year are creating the conditions to withdraw stimulus and start reducing asset purchases. “Perhaps the decision to do so will be Weidmann’s latest success as president of the Bundesbank at the December meeting,” he adds.

Jörg Krämer, Commerzbank’s chief economist, told the Financial Times that “the fact that Weidmann usually failed to get away with it may have had something to do with his resignation.” “It is unlikely that a new federal government will appoint a Bundesbank president who will again disagree with the majority opinion on the ECB’s board,” he added.