Do you know what AdBlue is? This is how it affects your engine

If you have never heard of AdBlue, there may be two explanations: either you drive a gasoline car or your diesel is a few years old. Here’s a hint: this is the additive that modern diesel vehicles use to reduce their polluting gases.

The Euro 6 regulation that came into force in 2014 in Europe significantly limited emissions of nitrogen oxides (NOx). Since then, manufacturers that have continued to bet on diesel cars have had no choice but to apply remedies to meet the requirements. It should not be forgotten that the reason why traffic restrictions are being studied in many European cities, and even abandon the manufacture of these vehicles, is precisely the need to limit harmful emissions.

The best alternative found so far is AdBlue. This is the name given to the solution composed of demineralized water and urea that is injected into the exhaust system of the engines, before the device for the selective catalytic reduction of NOx (SCR system). “It is capable of transforming more than 90% of nitrogen oxides into a less harmful mixture for the environment: nitrogen and water vapor (H2O)”, summarizes Toni Queraltó, from the RACC assistance area.

In order for this process to be carried out, diesel engines have a tank and an additional refueling mouth; you have to worry about refilling it periodically. Today you can find AdBlue dispensers in almost every service station. When refueling, be careful, since the liquid is corrosive, so it can irritate the skin (it is advisable to wear gloves) or damage the vehicle’s paint if it comes into contact with the bodywork. 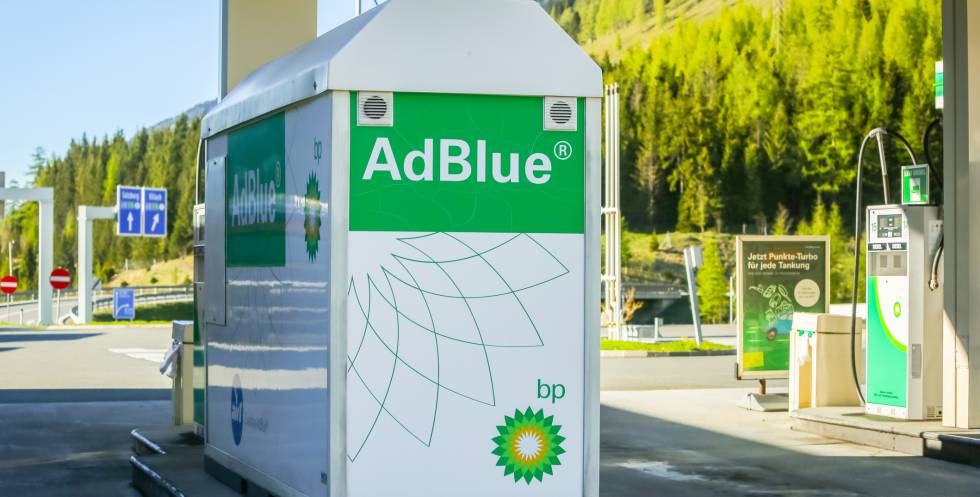 Furthermore, “if the vehicle remains in places with temperatures consistently below 10 ° C below zero, the freezing of the liquid creates crystals that could clog the ducts, damage the pump or plug the spray injectors,” warns Rafael Merinero Piñataro, CEO of Witzenmann Spain and leader of the work group of traction systems of the Spanish Technological Platform for Automotive and Mobility Move to Future (M2F).

“They fail mainly due to deficiencies in maintenance. 90% of the cases are commercial vehicles that cannot find the time to refuel AdBlue and go into emergency ”, has observed José Rodríguez Robayna, member of the executive committee of CETRAA, the Spanish Confederation of Automobile Repair and Related Workshops.

But really the biggest setback would occur in the event that we forget to fill the tank and we run out of the product. If that happens, the engine could not be started, so the vehicle would be immobilized to prevent us from polluting.

A problem that can have its hours counted, Merinero advances, since “there seems to be an increasingly interesting bet for the design of fuels whose own compositions include the corresponding additive, thus eliminating the risk of shortage of AdBlue”.

At this point, the researchers from the CMT-Thermal Engines Institute are emphatic: “Mechanically, the risks posed by the lack of AdBlue in the engines are nil. They can function without this additive without suffering any deterioration. The problem is that without it NOx emissions rise ”.

In fact, the European Commission’s rapid alert system on dangers in non-food products published at the end of last April a recall in France that affects the Peugeot 2008 V2 and DS3 Crossback models. According to this official alert, the AdBlue injector of these cars can be blocked, “which could result in higher NOx emissions that may exceed legal limits.”

More recently, in mid-July, the community alert system also warned that in some Opel Grandland X cars, “the urea injector may block when the engine is switched off, which means that urea will not be injected when the engine is restarted. car. “” This lockout is temporary and the injector will return to normal operation after 12 minutes of driving. This can lead to emissions of nitrogen oxides (NOx) above the regulatory limits ”, warns the report on this incident also reported by France.

The truth is that this system to reduce emissions is one more possible source of breakdowns, since it is composed of several components (tank, pump, injector, catalyst, sensors, etc.) that can fail, as is happening in some cases.

According to data from the sell out panel of the market research firm ThotData, the majority (88.3%) of the operations related to the AdBlue SCR system carried out by independent workshops (flagged by a network or not) and the brand channel second network (official agents), from January 2019 to September 2021, are to fill or replace the additive. These operations have an average net cost for the end user, mainly for labor, of 14.06 euros.

AdBlue-related breakdown repairs can cost anywhere from € 14 to € 400, according to ThotData

The ThotData study, carried out on a sample of 477 workshops and 12,692 operations, concludes that Citroën and Peugeot are the two brands with the most breakdowns related to the SCR system, with 34.2% and 24.9% of the total, respectively. Percentages higher than those that would correspond to them, given their market share in Spain, for tickets to the workshop in the independent and brand-name channels of the second network.

However, “brands such as Volkswagen, Ford, Renault, Seat and, above all, Toyota, have a lower ratio of SCR system failures than that which would correspond to an equitable distribution of tickets to the workshop”, they explain from the analysis company of data.

Regarding the price of the breakdown of the particulate filtering system, again the brands whose repair is more expensive for the end customer are Peugeot (with an average net price of 334.96 euros) and Citroën (292.08 euros), in addition to Toyota (224.65 euros). The least expensive, according to data from the sell out panel of ThotData, are those of Ford (148.44 euros).

Faconauto dealers, on the other hand, have not reported any incidents. Neither Juan Carlos García, technical director of Conepa, federation of workshop associations, has no record of breakdowns caused by AdBlue. “Our associates have never reported anything to me about it. I can also bring you my personal experience as a user, of more than six years ”, he says.

However, in CETRAA, which represents 30 provincial associations of all types of workshops, both independent and multi-brand as well as official, they did observe problems years ago in PSA cars (Peugeot, Citroën, DS, Opel and Vauxhall), today integrated into the Stellantis group. “The last cases reached us already a year or so ago. They had problems with the deposits and had to be changed. It was a factory defect, so it was covered by the manufacturer’s warranty, ”says Rodríguez Robayna, who supposes that the brand should have sent a circular to the owners.

“Sometimes it happens that independent workshops do not have that information and make the repair having to pay the owner instead of the brand. And that repair is more than 1,000 euros ”, he highlights. It clarifies that it is a fault that occurs after certain kilometers and that perhaps in cars that have circulated little, it will not manifest itself until after a few years, when the vehicle’s warranty has already expired.

In newly designed cars this system is integrated during the development of the car, but “at the beginning it was difficult to incorporate all the components in an already designed vehicle, since there were practically no holes for its installation, causing us to find the mouth of Filled in awkward or non-logical positions, such as, for example, inside the trunk ”, recalls Queraltó.

“In general, manufacturers have had to mount this system on already designed models and that may be one of the reasons for the possible problems that may have occurred in some make and model”, believes Arturo Miguel, responsible for the technical platform of the RACE.

In fact, in Stellantis they have detected that the first versions implemented in Opel or Peugeot brand vehicles are failing. Specifically, they give erroneous readings of the level of the product, even if the tank is full, which turns on the contamination alert pilot. That does not mean that the vehicle is exceeding emissions or that there is any danger to the engine, but it is true that it is necessary to go to the official after-sales service to study the solution, they warn from the automotive group, since given the configuration of their vehicles , if the alert is not eliminated, there is a risk of not being able to start the car after a certain mileage.

From the Renault customer management they assure that in relation to the additive, “a level of incidence higher than the rest of the components has not been detected, neither in vehicles under guarantee nor outside of it”.

Antonio Chicote, Ford communication manager, comments for his part that they continue to offer engines with AdBlue, “but they are no longer as important as in the last two or three years, since we are developing alternative solutions that allow us to reduce emissions further. fast, and more and more we offer hybrid solutions ”, he points out.

The professors and researchers of the CMT-Thermal Motors Institute of the Polytechnic University of Valencia, José Manuel Luján and Benjamín Pla, estimate the effectiveness in reducing NOx at values ​​close to 100% “when the exhaust gas temperatures are high enough, more than 200 ºC ”, values ​​that are easily reached in the exhaust systems of diesel engines after a short warm-up period. “Once achieved, the greatest risk in terms of effectiveness in reducing emissions appears in the precise control of the amount of AdBlue that is injected into the engine’s exhaust,” they explain.

If the measurement is less than optimal, the engine will emit nitrogen oxides. If, on the other hand, the amount of this substance is higher than necessary, there will be an excess of AdBlue in the exhaust that will be expelled into the atmosphere in the form of ammonia. However, these experts clarify, the engines have control systems so that the precise amount of this additive is added at all times.