Do caregivers opposed to compulsory vaccination continue to fight? 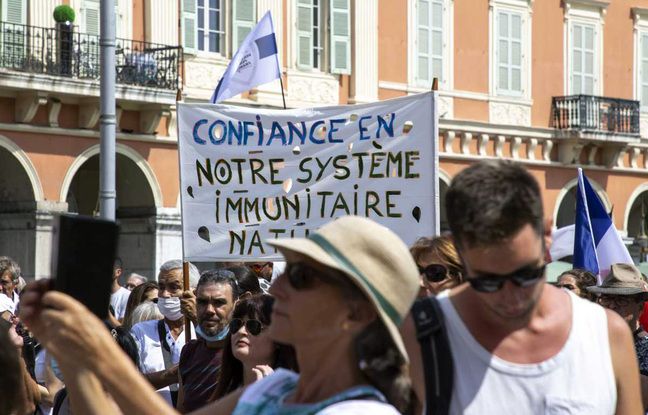 They stop. It’s finish. After a month, the two carers from Nice, Thierry Paysant and Christophe Nait, decided to end their hunger strike “to protest against the vaccine obligation”. “After a while, my children started to suffer from it. Already the government is screwing up my life, it is not going to destroy my family, ”says Thierry, 54, also a volunteer firefighter for twenty-five years. Since September 15, with his friend, they have only swallowed water, broth “and coffee”. He lost 14 kg. “For me it was okay. But my colleague, he weighed only 55 kg for 1.70 m. We didn’t want to end up on an IV either, ”continues the hospital fire safety officer.

They also faced another reality. “At the end of a month, it is no longer useful. People get used to it and nobody cares, ”said the former soldier. Starting with the government. “We were received by the sub-prefect who nevertheless told us that he respected our action. “He would like to point out because” no one from the hospital came [les] see and [leur] speak. “He continues:” The representative of the State told us that we were outlawed and that we were the collateral damage of this measure but that it was like that. “

Caregivers before the administrative court to challenge their suspension

The Azurean is moved, he struggles to find his words when talking about this experience and ” [son] combat ”. “I wanted to carry a message in an atmosphere of peace. I did it. Now my role is over. We will have fought to the end with Christophe. But to survive and continue the life that I have built, I must do otherwise. At my age, people don’t even want me on construction sites. I’m a young daddy so I need the money. Maybe I will do like the others and end up making this food vaccine. This nickname was given by hospital staff “forced to be vaccinated so that their contract is not suspended and their wages removed”.

At the Nice University Hospital, 99.6% of the staff received their two injections, said the communication from the hospital. This means that around thirty people, out of 8,824, have been suspended since October 15 and the obligation to present a complete vaccination schedule.

New hearing before the administrative court

Among them, some will challenge it in front of the administrative court on Thursday. They will be represented by Me Jérôme Campestrini in a suspension hearing. According to him, it “is not normal to have a difference in treatment between a person who is accused of serious misconduct in the exercise of his profession, who continues to receive his salary and a person who refuses to be injects a vaccine, from which his pay is withdrawn. “He also intends to base his defense on” the experimental phase in which the vaccine is located and which does not make it possible to force someone to be vaccinated against their will “.

Last month, he also represented the 522 caregivers who had filed two appeals against this decree of August 5, 2021, of the vaccination obligation, to suspend and cancel it. Without success. For this case, the lawyer remains “sadly lucid” and “fears” again that it is “a decision more political than legal”.

In the meantime, the demonstrations of the anti-tax anti-pass on Saturday risk “continuing and converging towards other struggles”, assures Thierry Paysant, referring to “yellow vests” and to the increase in the price of gasoline announced this week.

Marlon Botas: What do we know about the feminicide of Montserrat Bendimes in Veracruz?