Elisa remembered through tears how the “sandpaper hands” of her maternal grandfather felt on her body as a child, who violated her from the time she was 7 to 11 years old. Renata angrily questioned how her mother and father, now deceased, never realized that her older brother raped her when she was 4 or 6 and he was 17 or 19.

The above are two fragments of the 60 life stories collected between 2005 and 2006 by the Mexican researcher Gloria González-López. In total, 45 women and 15 men shared with her that they suffered some type of sexual violence by a family member.

The University of Texas at Austin academic published her findings in the book Family Secrets: Incest and Sexual Violence in Mexico, a subject that until then had been little investigated. His work also included interviews with 35 professionals, such as psychologists, psychiatrists, human rights specialists, activists, officials and even priests.

Morena announces initiative to ban the sale of girls in marriage

“Gloria González-López has managed to advance towards a feminist sociological theory on incest,” wrote in the foreword Marcela Lagarde, the anthropologist and actvista who coined the term femicide in Mexico to refer to the murder of a woman for gender reasons.

In an interview, González-López says that she became interested in understanding sexual violence in families as a result of working with Mexican migrants in the United States. As a psychologist and sociologist specializing in gender studies, she addressed issues of sexuality, and in her interviews began to hear, over and over again, stories of women whose first sexual interaction had occurred with a member of their family.

“One of the most important factors as to why sexual violence exists in families is because there is gender inequality,” says the researcher. In the first pages of her book, she explains that family ethics often promote the idea that women should be at the service of their male relatives, which puts girls and young women at risk.

“In a patriarchal society in which women are trained to be sexually available to men, a girl or a young woman who, for example, is forced by her uncle to have sex, may perceive it as something ‘normal’ and never speak to respect ”, writes González-López.

Sexual violence is not individual, it is social

Sexual violence is a social problem, and as such, “we have to solve it collectively,” says Gloria González-López. That is why she is convinced that group therapy is one of the most powerful ways to process and overcome pain.

“The groups are extraordinary because they help women to discover dimensions of their lives that they did not know,” explains the sociologist. “Each person who participates in the group is at different times and stages on a psychological, chronological and human level. When in those spaces a woman blames herself for having suffered sexual violence, there is already someone in front who has overcome that and intervenes to say ‘moment, it was not your fault’. The person feels validated and that is one of the great contributions ”.

The therapist Laura Martínez agrees that group therapy “is very rich, because in the sessions there are many experiences and experiences”. She began working in 1983 with sexually assaulted persons, and today she continues her work from the organization that she founded and directs in Mexico City 25 years ago: the Association for the Integral Development of Raped Persons (ADIVAC).

The therapeutic center located in the Santa María la Ribera neighborhood in Mexico City offers individualized or group care. The first is for minors or women who have experienced a recent rape and, therefore, are still going through intense crisis processes, explains Martínez. Those who access group care are people over 15 years of age who were attacked in their childhood or adolescence and seek to heal as adults.

The forms of work are diverse. “We take various theories and techniques: Gestalt theory, humanist theory, psychoanalysis, narrative theory, cognitive-behavioral; also the reunion therapy of Fina Sanz, the vegetable therapy to work all the parts of the body, the education techniques for peace, always crossed by the gender theory and the human rights approach ”, comments the psychologist.

All this is combined in a model of care that lasts from 90 to 100 sessions, approximately, often once a week. “The therapy cannot be done in a short time, because sexual violence alters all the emotional stability of the person and changes the life project in all cases,” says Martínez.

He also comments that group therapies must begin with group cohesion and not with stories of the violence experienced. Martínez says that strengthening ties between the participants is important at the beginning of the process, because afterwards comes a deepening stage that is usually very painful and in many cases there are desertions.

“I believe that sexual violence is an experience that is never forgotten, but those who lived it can come to understand why it happened, understand that it is a social problem, that they did not cause it and thus can be placed in a different way in the life, be less explosive, value their love affairs and get to enjoy their sexuality, ”says Martínez. 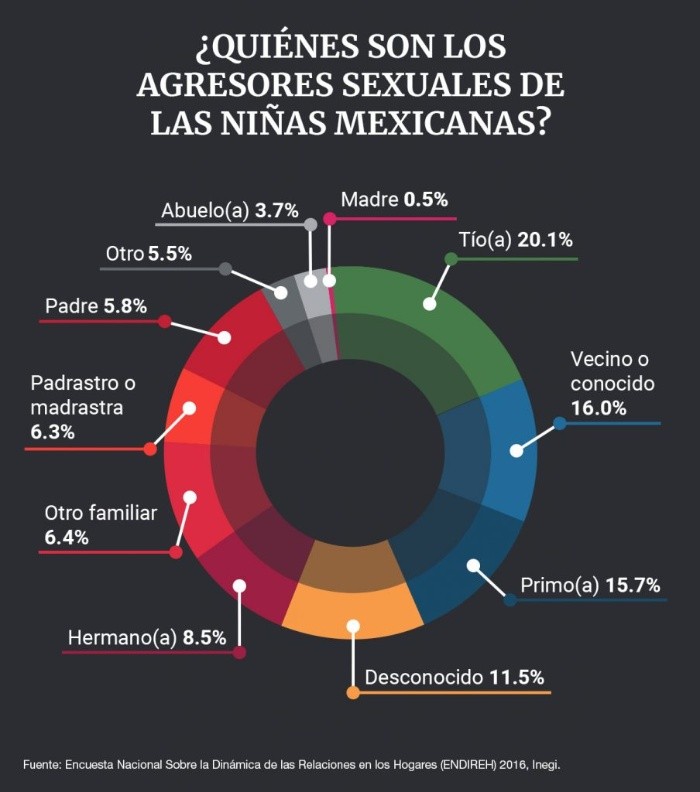 For its part, ADIVAC has a file that consists of more than 15 thousand records of sexual violence that occurred in the last 25 years, and recently the association has begun to process them for statistical purposes. Although this work is not yet finished, Laura Martínez has verified that the majority of the aggressors are people known to the survivors, such as uncles, stepparents or biological parents.

In addition to this, the vast majority of those attacked are women or minors. “Although there are cases of raped men, they are generally raped by other men. Sexual violence is an abuse of power in which the members of one gender feel they have the authority and social privilege to exercise their sexuality with whom, as and when they want, ”says psychologist Martínez.

Guilt, anger and loss of self-esteem are the most common consequences in people who experienced sexual violence.

“It is something that is lived with a lot of pain and shame,” mentions the therapist Juanita Núñez Flores, 55, founder and coordinator of the Association of Women Survivors of Sexual Abuse (Musas), also in Mexico City. Núñez has worked with this population for the last 28 years, so he has witnessed the difficulty that these people have to establish interpersonal relationships based on trust.

“There are patterns of behavior that are repeated from generation to generation. When a woman arrives, it is common to hear that what she experienced also happened to her mother and grandmother, ”continues Núñez.

In your experience, healing time depends on several factors, such as the age at which the assault began, the relationship with the assailant, and the duration of the assaults. It also influences whether the survivor spoke shortly after the assault and whether the people she contacted believed her or not. “The smaller the victim, the closer the aggressor and the more chronic the event, the longer it takes to heal,” says the therapist.

The psychologist also assures that she has seen many success stories, people who manage to recover, redo their life project, establish healthy relationships, balance their self-esteem. “All of this requires a commitment, because therapy is painful, difficult, and generally people do not want it to hurt,” adds Núñez.

In this regard, the academic Gloria González-López recalls one of the cases in her investigation that most moved her. A woman from Ciudad Juárez had been abused by her biological father when she was a teenager but she claimed it hadn’t affected her.

“When the lady found out what the father had done, at that moment she ran him out of the house, in front of her daughter, and that was more powerful than a thousand therapy sessions with the best therapist in town.”Says González-López.

That is why the researcher always emphasizes the importance of believing girls and boys, as well as creating homes where there is respect. “I have always said that one of the most important expressions of love that must exist in families in Mexico is gender equality.”