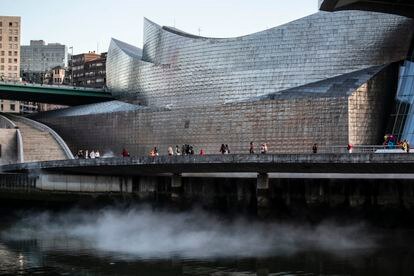 The Guggenheim Museum in Bilbao.

Ten years after the end of ETA’s terrorism, the Basque Country is experiencing a normality in the street and in politics much higher than those of Northern Ireland and Colombia, which, almost at the same time, approached similar processes. The attacks and threats have disappeared, the rejection of violence is overwhelming, there is wide recognition of the victims, the political climate has relaxed and identity debates have been overshadowed by citizen problems.

But that oasis has a dark side with varied profiles. The temptation to forget the drama experienced without drawing the lesson that terrorism had no justification, and the absence of shared memory, today separate Euskadi from achieving a fully normalized coexistence. EL PAÍS has spoken with historians, politicians, journalists and heads of Basque groups to try to understand this reverse of the coin. The majority conclusion is that, in the political field, the responsibility falls mainly on Sortu —for his lack of self-criticism after his complicity with ETA— and on the PP and Vox —for the partisan use of terrorism.

Veteran historians such as Juan Pablo Fusi, Luis Castells and José Antonio Rodríguez Ranz, also vice-minister of Memory of the Basque Government, have answered this double question about whether the Basque Country has changed in this decade and what it lacks for a normalized coexistence; the sociologist Ignacio Sánchez-Cuenca; the journalist Gorka Landaburu; the representative of the Mario Onaindia Foundation, Alberto Aguirrezabal; the vice president of the Foundation for Victims of Terrorism, Quico Tomás y Valiente; Consuelo Ordóñez, from Covite (Collective of Victims of Terrorism); Joseba Azkarraga, from Sare (support network for ETA prisoners), and Florencio Domínguez, president of the Vitoria Memorial Center. “The most weighty assessment in Euskadi is that ETA was defeated by not achieving its political objectives. We live in freedom. Politics focuses on citizen problems, ”Castells points out. But it introduces a nuance: “ETA has been defeated, not delegitimized. A sector of Basque society does not reject its past attempt to impose its ideology by force ”.

Fusi underlines the contribution of the governments of Patxi López (PSE) and Iñigo Urkullu (PNV) to normalization, but emphasizes that there is a general acceptance of nationalist language and symbolism. Critically points out that normalization is accompanied by the forgetting of terrorism. “It would be unfair to say that there has been a pact of silence, but the détente has been translated into oblivion, into distancing.”

Rodríguez Ranz agrees that “forgetting is not the best medicine to heal wounds.” It proposes an “inclusive, critical look at the past”, and moving towards a consensus on ethical values. The progress, in these ten years, in the recognition of all the victims stands out: of ETA; of the dirty war and of police abuses, “without equations or exclusions”. Sánchez-Cuenca points out as a black point that a third of Basques feel that their freedom is still diminished: “They are voters of the PP or without ideology who feel that their political representation is not socially recognized.” Despite this, it relies on euskobarometers to highlight that Basque society is better structured than in the rest of Spain. “Terrorism was so anachronistic that normalcy came quickly,” he says.

“ETA and the left nationalist they function like a military organization. When their bosses demanded they stop, they did. They also knew that their ability to act was at a minimum ”, Aguirrezabal points out to explain the drastic change. Landaburu perceived the turning point in the disappearance of the looks of hatred in the street. He is not surprised by the détente because politicians, he says, had been vaccinated with the polarization of the Ibarretxe plan.

“I am concerned that the more than 200 families whose cases are unsolved and that in Basque society there are sectors reluctant to recognize that ETA had no justification,” says Tomás y Valiente. Consuelo Ordóñez, after admitting that Euskadi has improved, maintains, against the majority criteria, that ETA has not been defeated. “There is peace at the expense of the victims, as the legalization of Sortu and impunity have been allowed. Zapatero negotiated, but did not cheat. Rajoy promised that there would be no impunity, that Sortu would be outlawed. He cheated us. There is a moral debt with the victims ”, he affirms.

Azkarraga emphasizes that social and political life has relaxed in the Basque Country and has worsened in Madrid. “Conservative parties and media act as if ETA existed, while the left nationalist contributed to the end of ETA and its dissolution. They don’t recognize it, but the Basque Country does, ”says the representative of the support network for ETA prisoners, referring to the electoral results of Bildu.

Florencio Domínguez emphasizes that the main problem is the lack of recognition by the left nationalist of his past complicity with ETA: “It affects coexistence, his role as a political interlocutor and memory. Young people must know the unjustifiable history of ETA so that it does not repeat itself ”. Tomás y Valiente abounds: “This self-criticism is essential so that ETA’s history is not legitimized.”

Aguirrezabal holds the right wing responsible for the disagreement. “It continues to use ETA, after it has dissolved. It’s worrying, ”he says, while he sees Sortu’s self-criticism as essential. But Azkarraga specifies that not only the left nationalist has to move forward. After admitting that “the Government has improved the situation of the prisoners,” he says: “There are pending acknowledgments of abuses by the State.”

“There are many wounds to heal. Sortu, who has already recognized the pain caused to the victims, needs to say that the terrorism was unjust and useless, ”says Landaburu, who also regrets the attitude of the PP. “If there were political recognition of the end of terrorism, better, but society has already assumed it,” concludes Sánchez-Cuenca.

Castells regrets the disagreement between the parties in Congress and in the Basque Country on terrorism and even Francoism, when in Italy and France there is a consensus on what fascism represented. He attributes it to “partisan uses of the past.” “You have to let history fulfill its moral and pedagogical role, as Santos Juliá said, and build coexistence on the truth. We cannot be aseptic neither with terrorism nor with Francoism, whose remains fed ETA in the Transition. Neither one was justified ”, Castells concludes.