Centenary of Northern Ireland, the mass that divides 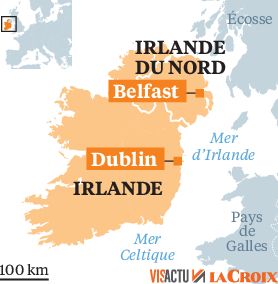 In a street in East Belfast, a mural recalls that “history is written by the victors”. But in Northern Ireland, it’s hard to know who won the Civil War. The stories are written in parallel and sometimes collide, as on the occasion of the hundredth anniversary of the small British province. An anniversary date that stirs up historic political tensions, already exacerbated by Brexit.

The religious leaders of the four main churches of the island have invited political leaders of all stripes to come and pray together this Thursday, October 21 in Armagh, the ecclesiastical capital of all of Ireland. They intend to celebrate a “mass of reflection and hope” and “to contribute to the work of building communities and deepening relationships”.

But the invitation card alone sums up the problem: it is about the “centenarians of the partition of Ireland and the creation of Northern Ireland”, two irreconcilable visions of the same date. For Republicans and pro-reunification nationalists, 1921 is synonymous with bitter defeat, because Ireland found itself amputated from six counties located in the North – it is the “partition”. For Unionists, it is about celebrating the creation of their nation as a constituent part of the United Kingdom.

Queen Elizabeth II was originally scheduled to travel to Belfast, but declined on Wednesday October 20 for medical reasons. Prime Minister Boris Johnson will be present. As for the Irish president, Michael D. Higgins, he declined an invitation which “is not politically neutral”. He is not the only one: the representatives of Sinn Féin, the Republican Party, have decided to boycott the event, which recalls “a catastrophe for our people and our country”, according to the leader of the party, Mary Lou McDonald. “(The partition) still costs us today, holds us back, divides us …”, she explained, adding that the president’s decision was “the right one” and calling on the rest of the government in Dublin to do the same. .

DUP leader (the ruling Unionist party in the North) Jeffrey Donaldson, seized this opportunity to criticize a lack of inclusion and consistency. He sees the president’s refusal as a sign that the cabinet “does not respect Northern Ireland as an entity and has little or no interest in a future shared with unionism.” Michael D. Higgins is in his eyes “a champion of reunified Ireland rather than the leader of reconciliation” and he even accuses him of having “set back North-South relations”. Since Brexit, however, the Irish government has favored a measured and cautious approach to think about the future of the two Irlandes on the model of a “shared island”. It is not so much a question of reunification as of pragmatism and collaboration, but the DUP, which sees its popularity eroding, is worried about the place reserved for Northern Irish Unionists. Because times are changing: a hundred years ago, Northern Ireland was created to ensure domination of the Protestant and Unionist community, which represented two-thirds of the population there. The demographics have since changed and the Republican and Catholic community has grown. Republican Sinn Féin is currently leading the polls in the province and could win the May 2022 legislative elections in the province. The criticisms of the DUP therefore go well beyond the simple participation in a mass.

Faced with these controversies, the organizers had to recall that their intention is not to celebrate the centenary but to offer an “opportunity to deepen the work of reconciliation in the context of a respectful dialogue”. The SDLP, another nationalist party, agreed to attend the event, wanting “to help break down the barriers of mistrust that persist between our communities” and “to reach out to build a new future”.

No more flights between Morocco and the Netherlands