Unknown players and opaque owner… But where does Sheriff Tiraspol come from?

This is the huge surprise of this start to the Champions League season. This Tuesday, Sheriff Tiraspol will travel to Group D leader outfit at San Siro, to challenge Inter Milan. After taming Shakhtar Donetsk (2-0), the Moldovan club created the feat on the lawn of Real Madrid (1-2). Barely 32% of possession and 3 shots on target against 11 on the Merengue side, for two goals signed by the very unknown Jasurbek Yakhshiboev and Sébastien Thill, an Uzbek and a Luxembourger…

Seen from home, it looks like the good old annual heist of a National 3 club against an L1 team in the Coupe de France. Or, for tennis fans, to the trajectory of the UFO Emma Raducanu, winner of the last US Open after coming out of qualifying, knowing that Tiraspol also went through three qualifying rounds and a jump-off, that is to say eight matches, to win the right to tease the continental aristocracy.

🗣️ “It’s the best and most important goal of my career, that’s for sure!”

From there to imitating the Briton to the end, there is a very steep staircase that Wilfried Balima climbs nevertheless at a run. “I always said that it was our year”, asserts in 20 minutes the Burkinabè, landed in 2005 in the former Soviet republic, presented as the poorest country in Europe.

“It is not the money that plays, it is the ground which speaks, continues the mid-36-year-old, who has shifted this summer in the framework. The club made a smart recruiting thanks to the coach [Yuriy Vernydub, Ukrainien de 55 ans, en poste depuis l’an dernier] and to the staff. “

Money, however, is not what is lacking in the Sheriff conglomerate, owner of the enduring champion of Moldova (19 titles out of the last 21 at stake) and of almost everything that occurs in Transnistria. This narrow strip of land stuck to Ukraine has an area between that of the Pyrénées-Orientales and the Alpes-Maritimes, and Tiraspol (about 130,000 inhabitants) serves as its capital.

Transnistria will therefore be far from being a “phantom state” in the years to come in view of its strategic location between Moldova turned towards the European Union and Russia. pic.twitter.com/e0dBJOqTnN

“Sheriff is a huge local holding company that owns supermarkets, gas stations and many other things, including a sturgeon farm for caviar under the name Aquatir”, details Emmanuel Skoulios, director of the Alliance française de Moldavia, where he has lived for 15 years.

Come on, we temporarily move away from sport and fish for a little lesson in geopolitics, like Le Dessous des Cartes sur Arte. Aggregate of companies with a rather difficult to read organizational chart, Sheriff was created in 1993, the day after the political upheavals caused by the collapse of the USSR.

“Transnistria, which has always had its own dynamic, seceded in 1990. There was a war in 1992 between the Moldovan armed forces and the Russian 14th Army, which offered a protectorate to this secessionist republic”, decrypts Dorina Rosca , lecturer at the American University of Moldova and associate researcher at the CNRS.

“At the time, we insisted a lot on the cultural and blood lineage between Moldavia and Romania. This had prompted the leaders of Transnistria [principalement russophone] to distinguish themselves from this turning point by keeping what they had experienced within the USSR. Even today, we find Karl-Marx streets and references to Lenin. “

Like all the other UN countries, Moldova, rather pro-European, does not recognize this self-proclaimed republic “which has its president, its elections, its currency, a Supreme Soviet and even its own vehicle registration system” , describes the academic.

Sheriff is owned by co-founder Viktor Gushan, a former KGB member, which pretty much says it all about the Russian influence still lingering in the area. Since 2002, the club has had a sports complex of more than 150 million euros on 40 hectares, with in particular three stadiums of 14,000, 8,000 and 3,500 seats (this one is covered). “There is also an Olympic swimming pool, tennis courts and there was a hotel that no longer exists,” adds Emmanuel Skoulios. It’s huge ! The complex is located at the entrance to the city, you can only see that! “ 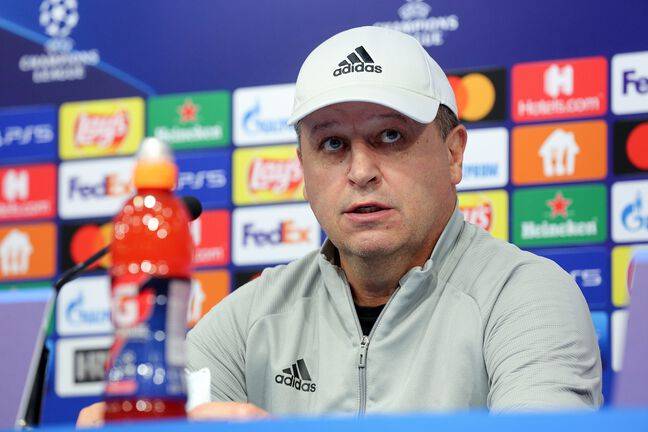 It is in this quirky setting in the heart of a region renowned for its heavy industry (metallurgy, energy production), obviously controlled by Sheriff, that a very cosmopolitan collective is shaken up and without the shadow of a star. On September 28 at the Bernabeu, Yuriy Vernydub had lined up a starting XI 100% foreign, in a 4-2-3-1 defense of Stalingrad:

To find Moldovans, you had to look to the bench, with three players. “We have a lot of foreigners, but a very good cohesion”, assures Wilfried Balima, who details the operation of this Spanish hostel relocated on the banks of the Dniester river.

A cosmopolitan and multilingual wardrobe

“The coach only speaks Russian. In the video room there are three translators, English, Spanish and French. But only the English translator is present on the pitch during training. The former player of US Ouagadougou has also learned the difficult language of Leon Tolstoy and Maria Sharapova since his arrival, whose scenario illustrates the clever recruiting house. “I was spotted during the Francophonie Games in Niger in 2005. I scored against Mali and had a good tournament. The coach at the time was there and told me he had a project for me. “

The writers of the Bureau of Legends could have imagined this “secret” entity with antennas deployed all over the world. Would the club be at the service of the independence tendencies of Transnistria? Not so fast, slows down Emmanuel Skoulios.

“All Moldovans are behind the Sheriff,” says the director of the Alliance Française. There is the political, diplomatic aspect and populations that have their own identities, some more Romanian-speaking, others Russian-speaking. But there is a great facility for many people to switch from one language to another and they are part of the same Moldovan whole. If the Sheriff wins again in Milan, the whole country could therefore honk its horn, from Tiraspol to Chisinau, the official capital.

“I blame myself for imposing that on them”: in the daily life of a family in a situation of poverty

Influenza Vaccine: Confirmation of the start date of the vaccination campaign in Mexico

Influenza Vaccine: Confirmation of the start date of the vaccination campaign in Mexico