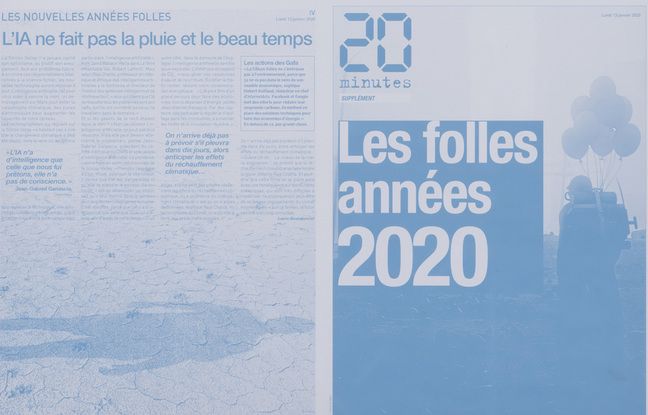 Sold for more than 3,000 euros! The NFT of the digital supplement The Roaring 2020s de 20 Minutes accompanied by the offset printing plate of the same number was sold for 3,000 euros (almost 1 ether) this Tuesday evening by the auction house
Piasa. “It’s a great sale,” said Frédéric Chambre, president of Piasa. There were two buyers who had positioned themselves. In the end, it was an Italian buyer who won the auction. “

Of course, we are far from the prices in the United States, but 20 Minutes and Piasa are nothing to be ashamed of. To give an idea of ​​the overseas market, in March, a work by the American artist Beeple was sold for 69.3 million dollars by Christie’s. The same month, the first tweet in the history of Twitter, published in 2006 by its founder Jack Dorsey, fetched $ 2 million on the Valuables platform. At the end of June, the program that created the Web and paved the way for the modern Internet was sold for $ 5.4 million in the form of NFT, by Sotheby’s.

The buyer is the owner of the “work”

If you have followed The Journal of an NFT whose six articles retrace all the stages of the creation of this virtual work, you know that going to the end of this project was not an easy task. It was necessary to choose the work – the Les folles années 2020 supplement published in January 2020 in PDF format – and overcome the legal obstacle linked to the ban on the sale of an intangible object in a public auction. The NFT was therefore accompanied by an offset printing plate specially designed for the occasion. It contains the first four pages of The Crazy Years 2020 supplement, which has never been printed. The buyer now owns the original work.

Until Tuesday, the suspense was at its height. It was double or quits. Either we managed to sell the NFT or we became the laughing stock of the crypto-arts world. “This is a first in a French market which is cautiously discovering NFTs,” explains Frédéric Chambre. Auction houses have a role to play in this learning. NFTs are not a fad, nor really speculative, but there is a need for learning. Potential buyers are no doubt reassured by an auction. But soon 100% dematerialized galleries will only sell NFTs. “

At that time we can say that the first sale of NFT in France took place on a Tuesday evening in October 2021, thanks to 20 Minutes.

Scholz takes over from Merkel today: who is he?

Ajax would have reported to Tottenham Hotspur for Bergwijn