It doesn’t leave you tasting raw onion all day. It is also not stuffed with barely cooked industrial fries, tasteless Spanish tomatoes or a “house” white sauce made from frozen mint. No, Kebreizh is meant to be different. Born in the mind of Rennes chef Florian Bobes, this Breton kebab was sometimes offered to the thousands of gourmets who flocked to the Marché à manger, organized every first Sunday of the month at the central halls of Rennes. For the past week, it has been served all day at 13 rue Saint-Georges. A sign that fans of this Ferrandi school student know well since it is here that he held
his restaurant Debriñ, the only address in the Breton capital offering a mystery menu.

After three years of hard work and two children to raise, the chef wanted to indulge himself. Tired of extended services, he changed everything to buy a street-food brand. But why did you opt for the kebab, long a symbol of the gastronomy of the second half of the restless nights in Rennes? “It’s a kif. I am 33 years old and the kebab, I grew up with it, like all my generation, ”explains Florian Bobes. 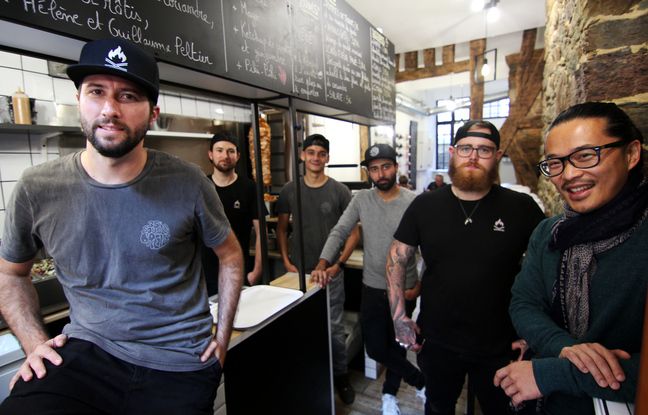 However, there is no question of giving up his love of good cuisine, local food and discovery. To shape his 100% Breton kebab, the chef makes his breads from the flour of the Champcors mill (Bruz), he prepares his Janzé chicken spit every day and offers four sauces: white, of course, but also a ketchup from carrots, a homemade mayo and a “piki-piki” sauce All complemented with raw and cooked seasonal vegetables. “Candied red onions, red cabbage, young shoots. In a sandwich, you need crunch, fat, acid… The base is the taste, ”insists the Rennes chef.

Since the opening of Kebreizh Last Wednesday, his sandwiches sold for just under 9 euros went like hot cakes. “We’re going out 200 a day for now. It already takes a lot of time because we bake all the breads ourselves ”. 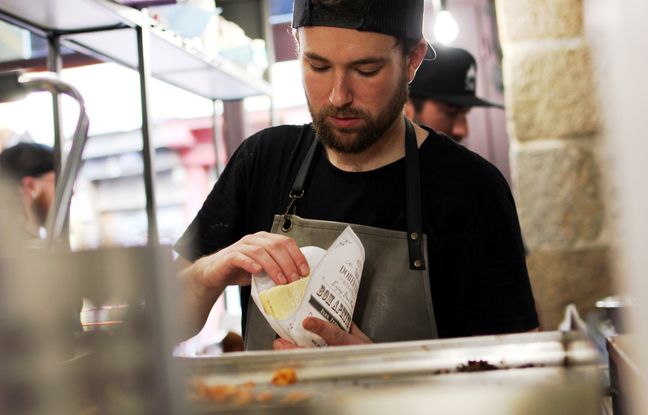 In Rennes, the Kebreizh restaurant offers a Breton kebab served with Janzé chicken cooked on a spit. – C. Allain / 20 Minutes

To run the boutique Florian Bobes is not alone. Around him, a team of six men are busy spinning the sign. Among them, a well-known head of Rennes catering. After a great adventure in the “restaurant-bar-tattoo-garage-salon” called “Avec” and which is a hit in the South-East ZI, François Bro joined forces with Kebreizh to develop the concept. “I was a regular customer of Debriñ. Street food is too often associated with an industrial image. One day, we discussed a concept of quality street food to be invented. We knew there was a place. We didn’t want Parisians to come here to launch it. “

The Debriñ restautrant will come back “much bigger”

Ambitious, the pair does not hide their desire to develop Kebreizh in Rennes, in its near periphery and wherever it will find people motivated by “100% local” to taste it. “We can go to Japan, to Lyon. We do not forbid anything ”, assures François Bro. The pair are also preparing the reopening of Debriñ and its surprise menus in a “much bigger” place. But we will not say more for the moment.

Fernández de Cevallos responds to AMLO: “I do have a sense of humor, but he has no sense of honor.”

Fernández de Cevallos responds to AMLO: "I do have a sense of humor, but he has no sense of honor."