Oscar winner Aaron Sorkin will release Being the Ricardos later this year, a true drama about the iconic television duo Lucille Ball and Desi Arnaz, who starred in I Love Lucy (1951–1957). The first teaser trailer is out now.

The film follows the Hollywood couple during a production week on the set of I Love Lucy. From a Monday reading through to a Friday audience recording, Ball and Arnaz face challenges that could spell the end of their careers and their marriage. They also feature their racial squabbles, with Desi being discriminated against for being Cuban, and Lucille fighting to keep him on the show.

Watch the teaser of Being the Ricardos here:

Director Sorkin previously worked with a streaming service, for example, he released the true film The Trial of the Chicago 7 (2020) on Netflix last year. His film was nominated for no fewer than six Oscars. Previously, Sorkin also made the film Molly’s Game (2017).

Being the Ricardos is vanaf 21 december seen on Amazon Prime Video. The film is also appearing in select cinemas; whether this is also the case in the Netherlands remains to be seen. For a complete overview of all new films and series that will soon appear on the streaming service, you can go here. 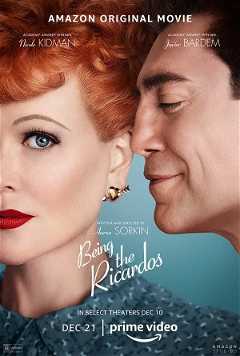 A biopic that follows the life and marriage of Lucille Ball and Desi Arnaz.

Beeld: Still ‘Being the Ricardos’ via Amazon Prime Video