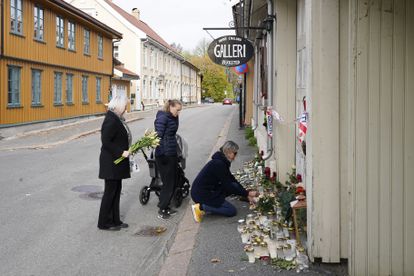 Several people leave flowers this Monday in front of the studio and the house of the artist Hanne Englund, one of the victims of Kongsberg.Terje Bendiksby (EFE)

Norwegian police revealed on Monday that the confessed murderer of five people in Kongsberg, southwest of the capital Oslo, used “a stabbing weapon” to end the lives of his victims, four women and a man between 52 and 78 years old. . Authorities had previously reported that the man, a 37-year-old Danish citizen named Espen Andersen Brathen, had used another weapon in addition to a bow and arrows, but had not wanted to reveal which one to avoid influencing witnesses, the inspector said today. Per Thomas Omholt during a press conference.

With the most advanced investigation, the police have decided to relate how they believe the crimes happened. After speaking with 140 people – 60 of them have been formally questioned – he has been able to reconstruct what steps Brathen took after starting to shoot the bow inside a supermarket in the center of town. The first examinations show that the five victims were stabbed during the just over 30 minutes that elapsed between the murderer’s first encounter with the police and his arrest.

Despite the fact that at first the police reported that Brathen had converted to Islam and that there were suspicions about his radicalization, the terrorist motive has lost ground over the days. Man’s psychiatric problems are now the main hypothesis that researchers are working with, who even doubt that it had really been converted. The Imam of the only mosque in Kongsberg, Oussama Tlili, has told Norwegian media that Brathen visited him three times four or five years ago, but that it seemed to him that he did not really know anything about Islam.

Several neighbors of the aggressor have described his erratic behavior in recent years. In 2017, an old schoolmate of the attacker came to alert the intelligence services, the PST, of the psychiatric problems he seemed to have and sent them the link to a Facebook video in which Brathen launched a confusing “warning” and he claimed to be “Muslim.” The PST evaluated her case and contacted the health system. The authorities have announced that they will investigate what follow-up was given and if its dangerousness was evaluated. The new Minister of Health, who took office on Thursday along with the rest of the Norwegian Government, has acknowledged that perhaps the health system did not work well and has announced that it will also study how to collaborate with the police in these types of cases.

The PST received a first notice about Brathen as early as 2015, as recognized by this government agency. The head of the anti-terrorism department, Arne Christian Haugstøyl, assured that he was classified as a vulnerable person who could be on the verge of radicalization, but it was considered that he had no intention or capacity to commit violent acts. The same happened in a second evaluation in 2018. Then the agents in charge of his case determined that his behavior was not motivated by religion or ideology, but that he suffered from a serious mental illness. They saw him capable of committing “small-scale attacks, with simple means,” he said. It was then that the case was referred to the health system.

Police believe that Brathen chose his victims at random. He entered several houses and murdered their inhabitants inside. He did it during the 34 minutes in which the agents chased him, who had stopped him after six in the afternoon at the Coop Extra supermarket. The assailant shot an off-duty police officer in the back at the establishment. A patrol was alerted and fired into the air to try to cut him down, but Brathen attacked them. They had no protective equipment and had to retreat and call for reinforcements. At that moment he ran away. The police have not specified how, but the supermarket has an exit through the back, through a parking lot. The authorities have announced that an independent investigation will examine how the arrest took place and whether any mistakes were made.

Brathen remains admitted to a psychiatric facility, to which he was transferred Thursday night. He is in police custody and a judge has ordered four weeks of provisional prison for him. Several forensic psychiatrists examine his condition.