Yolanda Díaz, Ione Belarra and Ada Colau stage the unit in an act to vindicate the housing law 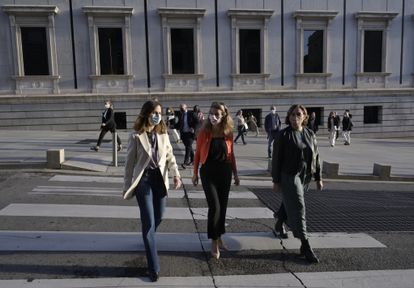 From the left, Ione Belarra, Yolanda Díaz and Ada Colau, upon their arrival in Congress this Monday.Óscar Cañas (Europa Press)

Three of the main leaders of United We Can this Monday staged unity within their political space in an event organized in the Congress of Deputies to vindicate the housing law after the agreement reached with the PSOE in the framework of the budget negotiation. The second vice president, Yolanda Díaz; the Minister and Secretary General of Podemos, Ione Belarra; and the mayor of Barcelona, ​​Ada Colau, have been in charge of opening conferences in which Díaz has defended that housing policies are a “new pillar” of the welfare state.

Barely an hour after the Prime Minister, Pedro Sánchez, during an interview on Cadena SER, was in favor of a “union process” on the left of the PSOE, the vice president has reaffirmed her intention to lead a platform that brings together different political forces, although focusing on the people. “I am going to open a conversation with Spanish society, and also what interests me is that Spanish society is the protagonist, which is what is lacking in this country, and believe me that with that conversation with Spanish society we do not set limits” , Diaz said at the exit of the act. Minutes before, during his speech at the conference, there have been several winks to Belarra and Colau. “Affections in politics are what allow us sometimes to survive and at this table, with the companions I am with, I feel especially comfortable,” said Díaz, before thanking the Minister of Social Rights for “leaving the skin ”, to get the“ best possible deal ”. Regarding the mayor of Barcelona, ​​he praised her being a leader who “uncovers injustices”, replicating a recent reference by the literary critic and essayist Jordi Amat in EL PAÍS, and towards the end of his speech he used the first person plural to refer to “Our country project”.

Gestures in politics matter. Although Colau already participated in an event on feminism with Díaz, Irene Montero and other leaders of Podemos on October 1 in Madrid, the photo with Belarra comes a week after it was known that the vice president and the mayor will be in a day organized by the Poble Valencià Initiative, a party integrated into Compromís. In it, in addition to its leader, Mónica Oltra, the spokesperson for Más Madrid will participate in the regional Assembly, Mónica García. However, it is not foreseen that any leader of Podemos will attend the event, which is organized within a series of sectoral events prior to the Initiative congress next January. Both Díaz and Colau have disassociated their participation from the electoral process that the vice president will undertake and the details of which are still unknown. “To talk about electoral platforms, there will be time later,” said the mayor of Barcelona, ​​who has explicitly endorsed Díaz’s leadership by pointing out that it is “already consolidated” and continues to “grow.”

Warning about “pressure” against the law

During the inauguration of the conferences in Congress, Díaz stated that housing policy is “called to be” a “new pillar of the welfare state.” “This law is only the beginning, there is a huge road ahead that we have the obligation to develop,” added the vice president, who defends that it is a norm “in favor of the people” and against “speculation and abuse.” Díaz has criticized the Popular Party, which has already stated that it will not apply certain articles of the law where it governs. “The PP is wrong. There will be time for the Spaniards to get them out of their mistake ”, he concluded.

Also Ada Colau, who as founder of the Platform for People Affected by Mortgages in Barcelona began her emotional intervention, has warned of the dangers that the law faces in its parliamentary procedure. “That everyone is vigilant, because real estate pressures are not going to stop, on the contrary, they are going to triple,” he said. “A temptation that the PSOE may have when it receives these pressures is to delay the processing process, which is one of the ways they have to boycott a norm,” added the councilor, who encouraged “to tell the president [Pedro] Sánchez that the agreements are to be fulfilled and this law must be processed quickly and must not be cut or decaffeinated in the parliamentary process ”, he concluded.

Ione Belarra, the main promoter of the agreement on the housing standard by United We Can, has signed the pact and has vindicated the complexity of the process. “Of all the negotiations that I have closed, I think I am not lying if I say that this has been the most difficult.” The minister, who began the talks on the law when she was secretary of state, believes that this will mean a “paradigm shift.” “For the first time, housing is going to go from being a market good to becoming a right.”