The big winner from the world’s chip shortage 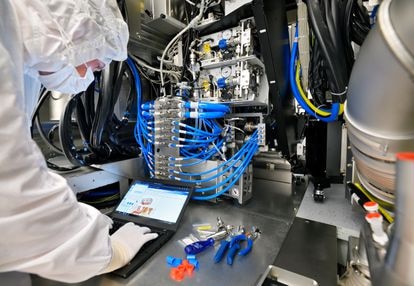 The world is experiencing a semiconductor crisis. Multiple sectors, from automobiles to video games, are unable to respond to consumer demand due to the shortage of chips. In this context of shortages, there is a company that rubs its hands: ASML. Unknown to the general public, this Dutch giant has accumulated a 300% rise in the stock market in the last three years and is already, with a capitalization of 265,000 million euros (more than twice the size of Inditex), one of the European companies most valuable. Your secret? Provide semiconductor manufacturers with machines – based on lithography systems – key for their production.

“Demand continues to be very high across our entire product portfolio. This is a reflection of a market focused on supporting the creation of the necessary infrastructure for the digital economy ”, said last August its CEO, Peter Wennink, during the presentation of the semi-annual results. In the first six months of the year, ASML increased its sales by 45%, to 8,384 million, and earned 2,369 million, 107% more. These figures seem only a preview of what is to come. The company celebrated its investor day at the beginning of October, where it advanced that its forecast is for billing to grow at an average annual rate of 11% over the next decade.

One of the advantages that ASML has, and that allows it to have so much confidence in its potential in the medium and long term, is the very high market share it has in many of its products, reaching monopoly situations in some of the models more advanced. “The growth forecasts that it has given seem reasonable to us, given the entry barriers posed by the extreme complexity of the manufacture of new equipment, the investments and the time necessary for its development”, Banco Sabadell analysts emphasized in a recent report.

The economy is advancing by leaps and bounds towards its digitization. Technologies such as artificial intelligence, the implementation of 5G or robotics processes will keep the demand for chips high in the coming years. Taiwan Semiconductor Manufacturing, one of the main customers of ASML machines together with Samsung Electronics and Intel, has already advanced that it will invest 100 billion dollars (about 86.2 billion euros) in the next three years to increase its semiconductor production capacity .

The Veldhoven-based company has become a key player in the global technology gear. The latest trend that has consolidated its leadership is the extreme ultraviolet (EUV) lithography technique. These types of machines allow manufacturers to develop chips with a size of less than 10 nanometers, that is, 10,000 times thinner than a human hair. An EUV machine is worth about 200 million and the company expects orders to exceed 70 units annually by 2025. Its laser emits extreme ultraviolet light capable of developing increasingly sophisticated chips for mobile phones or other electronic devices.

“ASML’s Monopoly on Extreme Ultraviolet Technology and the Key Role in the Enforcement of Moore’s Law [principio según el cual cada dos años se duplica el número de transistores en un microprocesador] make it one of the most important players, not only within the semiconductor supply chain, but in the entire global technology ecosystem, ”Janus Henderson analyst Shaon Baqui responds by email.

The world is heading for a geopolitical pulse in the field of technology and a piece of the board as relevant as ASML is no stranger to this context. Recently, and under pressure from the US, the Government of the Netherlands withdrew the company’s license to export its EUV machines to China. However, experts believe that ASML will end up benefiting from this turn to technological nationalism. “The fact that different regions are betting on technological sovereignty will have a positive impact on the company. The US, Europe and China have already announced investment plans of 52,000, 15,000 and 80,000 million dollars respectively in the next three years ”, Goldman Sachs analysts explain in a note to their clients. It seems that not even a technological cold war will cool the heat on the ASML Stock Market.

In 1984, Philips and Advanced Semiconductor Materials International created a new company focused on developing lithography systems for the growing semiconductor market. They named the new company ASM Lithography. “The beginnings were in a leaky shed next to Philips headquarters in Eindhoven,” the company describes on its website. This project is today a giant with more than 28,000 employees and a presence in 16 countries. The current owners of the company are not the founding groups, but the large global investment funds. Capital Group is the largest shareholder with 6.83% of the capital, according to data from Bloomberg; the second, BlackRock (5.21%), and the third, Baillie Gifford (4.42%). Its main markets are in Taiwan (35% of sales), Korea (31%) and China (17%).