Macron playing with a Pfizer and Moderna logo jersey? Watch out for editing

Emmanuel Macron, new striker of “FC Pfizer”? On Facebook, a user is ironic about a photomontage showing the President of the Republic wearing a football shirt on which appear the logos of the Pfizer and Moderna laboratories.

There is also the logo of the Rothschild & Co investment bank, for which Emmanuel Macron worked from 2010 to 2012, as well as those of Adidas and the sports club Variétés club de France. 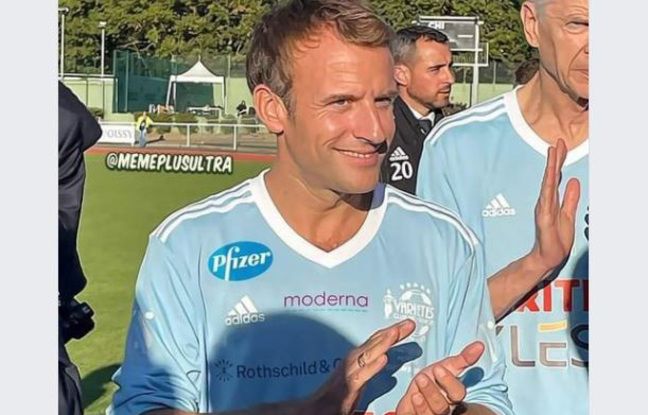 The jersey worn by Emmanuel Macron has been changed. The logos of the two laboratories as well as that of the investment bank were added to a photo of the president taken on Thursday. The many pictures of the meeting relayed by the press agencies and the Hospitals Foundation on show.

The head of state took part in a charity match on Thursday under the colors of the Variétés club de France. The Ile-de-France club, joined for the occasion by Christian Karembeu, Robert Pirès or Arsène Wenger, faced caregivers from the intercommunal hospital center of Poissy Saint-Germain-en-Laye (Yvelines). The match raised 50,000 euros for the benefit of the Hospitals Foundation, chaired by Brigitte Macron. The money was donated to Operation Yellow Pieces.

The presence of other sponsors on the jersey worn by the president – and very real this time – has however caused a reaction. The president notably wore the logos of Criteo, an advertising retargeting company, of AFER (French Association for Savings and Retirement) and of Klésia, a group which notably offers supplementary pensions. CGT notably republished a publication accusing Emmanuel Macron of being a “man-sandwich of private pensions”, while in 2019 he launched a vast pension reform, put on hold due to the health crisis.

Klesia had already supported the Hospitals Foundation a few weeks earlier, during a match between the Variétés club de France and a team of parliamentarians. La Poste, the Betclic online betting site, the French football federation and the Sanofi laboratory were among the sponsors.

Should we curb the construction of single-family homes?

AMLO asks for time to see Durazo results in Sonora

AMLO asks for time to see Durazo results in Sonora