Alessandra Rosaldo defended the statue of Eugenio Derbez in Acapulco 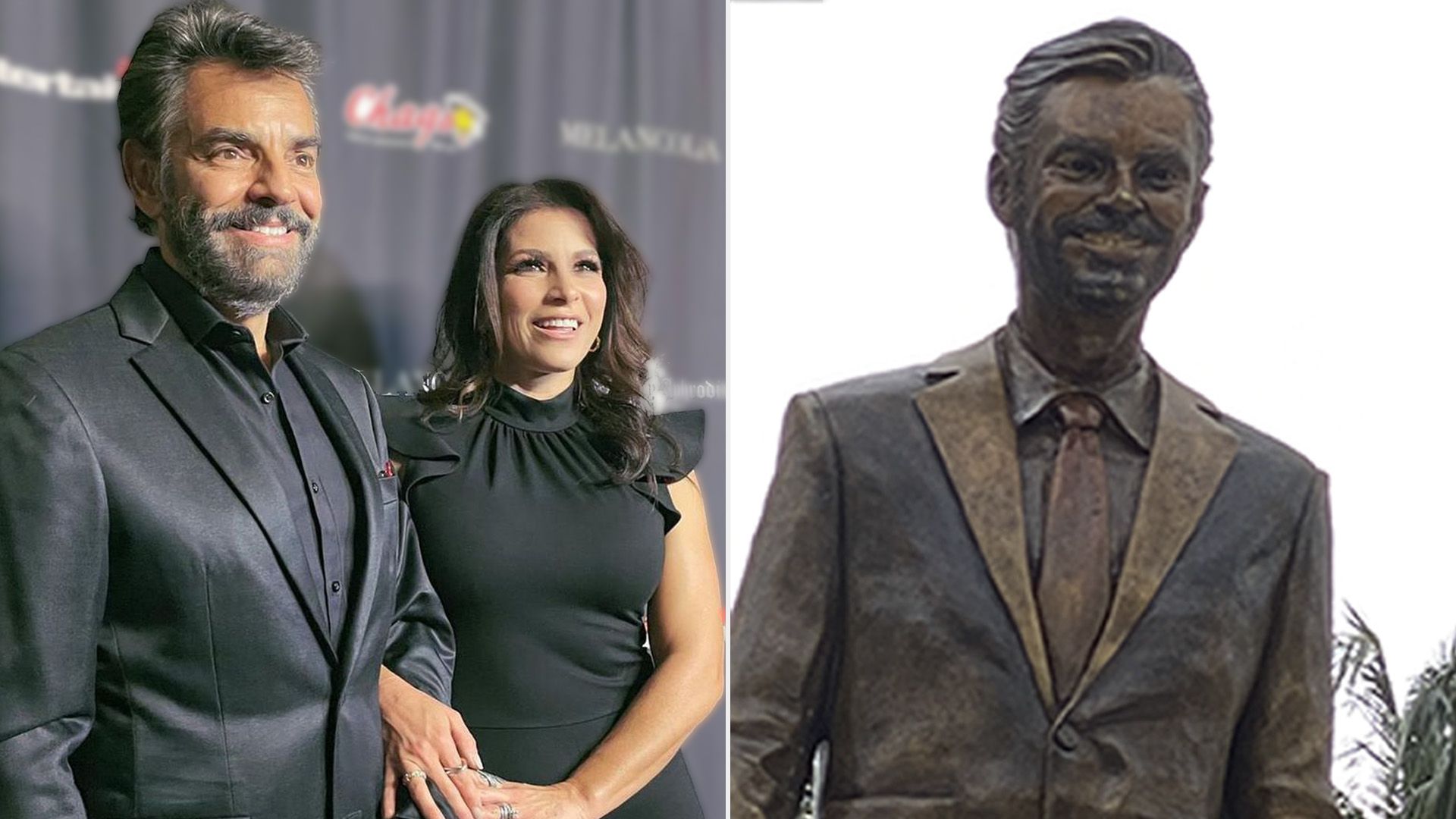 A few days ago it was announced that a statue was inaugurated in Acapulco in honor of the actor Eugenio Derbez, which caused much controversy among the inhabitants and was even relocated. His wife Alessandra Rosaldo came to his defense, assuring that the actor deserves recognition.

It was in an interview with The sun rises where the singer assured that Derbez was unaware that a statue of him had been inaugurated. “All this they say makes me sad, he did not ask for any statue, he never found out about this, he is totally dedicated to his country and everything he has done is for Mexico.”

Alessandra also confirmed that the comedian has supported the state with donations and even has the evidence of his support. “What Eugenio has done is to promote Acapulco, he was the image of Acapulco a few years ago and with his film spoken in Spanish and the most successful in the world No refunds donated the box office for a whole weekend, which is more than a million dollars and there are the tests, like the rebuilt schools ”. 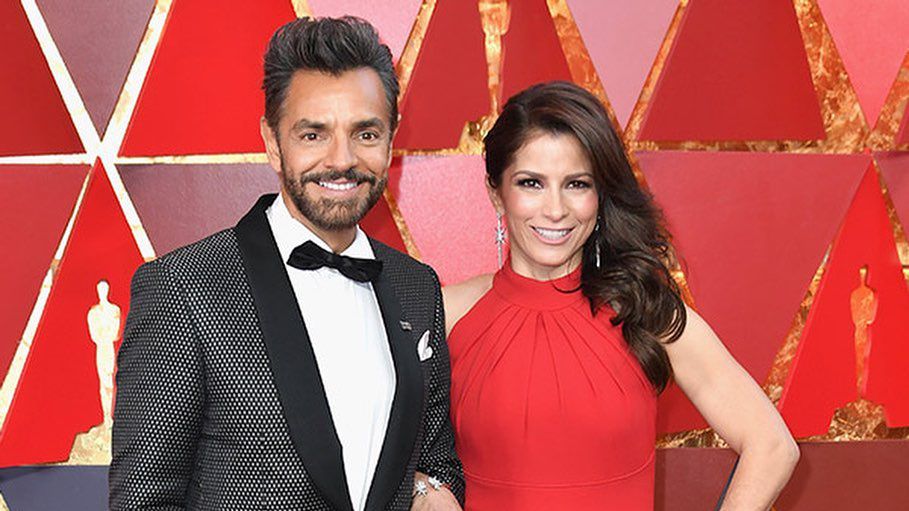 Alejandra and Eugenio got married in 2012 (Photo: Instagram / @ ederbez)

The member of Opposite Senses He took up a phrase to exemplify the criticism that Eugenio has received. “They say out there and that I refused to believe it, but it has a certain truth, it is that the worst enemy of a Mexican is another Mexican and that is very sad. When I read all this or when I find out what is being said, it makes me sad ”.

On October 15, the journalist Javier Poza shared some audios of the actor where he himself commented that it was a tribute for his donations in 2015 that helped rebuild a school damaged by natural phenomena Ingrid Y Manuel.

The actor commented: “They told me it was because of the help I had given Acapulco. In 2013, there were cyclones Ingrid and Manuel that destroyed a large part of Guerrero, there were 230 thousand victims. And with the money of No refunds, which we donated to rebuild a school and several other things, in November 2015, in Huamuchitas, Guerrero a school called Rubén Mora was rebuilt. There is the school, there is the plaque ”.

Although the comedian showed his appreciation for the statue, he assured that he did not request it for having supported the state, but that the state of Guerrero offered it to him and it coincided with the premiere date of his new production Acapulco.

Derbez assured that the government did recognize his work to promote tourism on the Acapulco coast and even spread Mexican culture. “Inauguration of the Eugenio Derbez roundabout in gratitude for his contribution to the dissemination of Acapulco in the world” was the legend of the plaque that accompanied the statue.

Days later they began to share images through social networks, where they assured that the tribute to the actor had been vandalized, as it was wrapped with tape, cardboard and plastic, in addition to being lying on a bench in the gazebo. 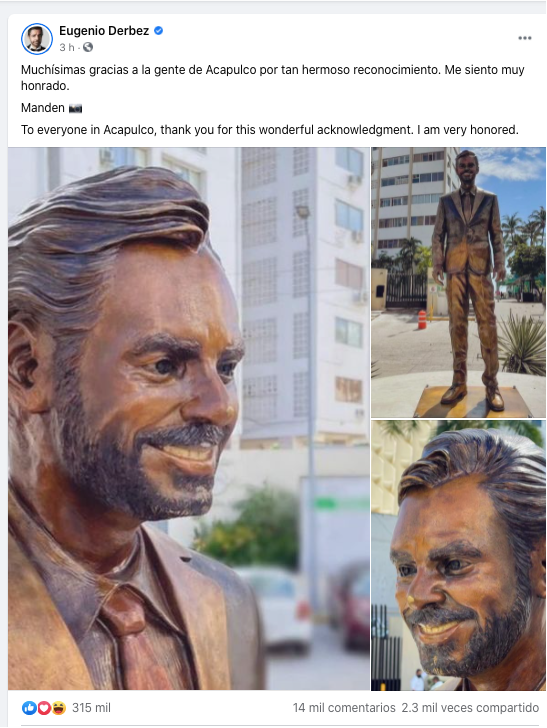 Eugenio Derbez thanked the state of Guerrero and encouraged his followers to take a picture with his statue (Photo: Facebook / Eugenio Derbez)

Hours after the photographs went viral, the director of the city’s Municipal Planning Institute, Yair García Delgado, assured that if society formally requests to remove the statue, the state would remove it.

Finally Eugenio Derbez shared the images of his statue, where the actor confirmed that it was relocated. “They never vandalized her. It came wrapped in plastic to protect it ”, in addition the comedian invited his followers to share a photo of them with his tribute. “Many thanks to the people of Acapulco for such a beautiful recognition. I feel very honored. Send your photo ”.

Pedrito Sola launched a controversial message about the female vote

Inés Gómez Mont and Galilea Montijo in New York: this was their luxurious vacation a couple of years ago

Yolanda Díaz, Ione Belarra and Ada Colau stage the unit in an act to vindicate the housing law

U.S. ENERGY SECRETARY SAYS REFORM COULD ALSO HINDER JOINT EFFORTS BY MEXICO AND YOUR COUNTRY ON CLEAN ENERGY AND CLIMATE

Canada calls for action to resolve security in Haiti