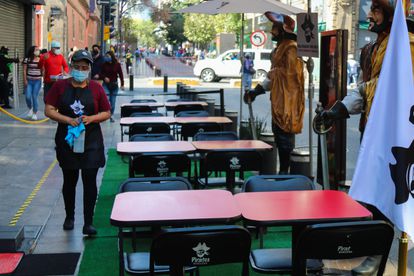 A worker cleans the tables of a restaurant in Mexico City.José Pazos (EFE)

On a bit of sidewalk on Avenida Sonora in Mexico City, a few blocks from Paseo de la Reforma, Valentín González invites passersby to his taco stand. It has steaks of steak, pork rinds pressed in green sauce and ribs, all accompanied by rice. Every day that the taquero opens his business it costs him money and lately, the costs are so high that he returns home without a weight of profit.

The corn tortilla has risen 30%, says González. The oil more. The gas you use for cooking has never been so expensive. Data from the National Institute of Statistics and Geography (Inegi) back it up: year-on-year inflation rose 6% in September and, among the most dramatic increases, is the price of liquefied petroleum gas, LPG, with a rise of 21%. The price of onion, a basic ingredient in Mexican cuisine, has risen 27% and the serrano pepper, 12%.

“The problem is that everything has risen and it is known that it is due to the pandemic, but there should be a control,” says González, while stirring one of the stews, “in this pandemic what was necessary was that there was support from the Government or that prices will be controlled ”. Tacos El Fish, as his stand is called, went from selling 250 tacos a day to 60 and, in order to cover expenses, González had to raise his prices.

The area, a high-income colony, combines residences, businesses and offices, but the pandemic thinned the staff who attend businesses and closed offices in exchange for telecommuting. González has not seen his “usual” clients for more than a year. “We are having a difficult time economically,” says the crestfallen taquero, “we depend on this and our situation is critical.”

“My question is why is everything going up so much?” There is no simple answer to the question that frustrates González. The inflationary phenomenon that is being experienced throughout the world has complex roots that have to do with the drop in production due to confinements or social distancing and the high demand driven by the stimulus to spending. Unlike what was thought a few months ago, monetary authorities and analysts do not know with certainty whether it is transitory or not.

Navarrete does not use the word “spiral” to describe this inflation – a feared word in this context that brings back memories of the hyperinflations that have been seen in Latin America in the past. However, the economist does not expect this to end anytime soon. According to his forecast, Mexico will end the year with an annual inflation of 7.1% and 2022 will also close above the central bank’s target range, with 4.4%. Although he has an estimate, he warns: “I don’t know what will happen to inflation. Frankly, the model doesn’t work anymore, neither model works. The only thing I know is that they are experiencing shocks and shocks and they will continue to do so ”.

The best tool countries have to contain inflation are their central banks and their work has several dimensions. On the one hand, the perception of the institution as robust, serious, technical, autonomous and with sufficient reserves, offers peace of mind to those who use the national currency. This is why the bank, in its announcements and communications, speaks of “inflation expectations”: because there is a part of inflation that has to do with what people expect will happen to their currency. “To some extent, this has to do with people’s perception of whether the phenomenon we are experiencing is transitory or long-lasting,” says Navarrete.

On the other hand, the central bank defines the reference interest rate for the financial system as a tool to contain inflation expectations, since, in an economy that is growing at such an accelerated rate that inflation is generated, an interest rate High can scare away investment, in turn reducing inflation. Banco de México has raised the interest rate on three consecutive occasions since June to deal with inflation, but one of its deputy governors has consistently voted against this decision, considering that the current phenomenon is not one that can be solved in this way.

“A higher rate does not resolve the factors that originate inflationary pressures: increase in international prices of inputs and disruptions in supply chains,” said Deputy Governor Gerardo Esquivel in the last monetary policy meeting, according to the minutes published on the Thursday. “The increase could also be counterproductive. Continuous increases could be interpreted as signs that inflation is permanent, ”says the report.

What the central bank is interested in is that the expectation for the next four to eight years does not move because generally companies make contracts based on inflationary expectations, says Navarrete. “If expectations change at some point, then the contracts will reflect it and inflation will be generated.”

At eight o’clock in the evening, González, his partner, and their one-and-a-half-year-old daughter begin to containerize the food that was not sold during the day and prepare to close the stall. Before, he could be transported home, about two hours away, by taxi. Now, he pays 18 pesos to get on the bus, even if he gets home around midnight. “We have made many sacrifices in this pandemic,” says the taquero, “since it began there have been no new clothes, there have been no shoes, there has been nothing. But here we continue because if we work we win and if not, then no ”.