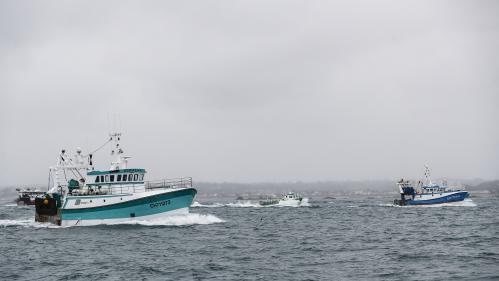 France wants a solution by November 1 on the post-Brexit fishing licenses granted by the Channel Island of Jersey. The deadline remains “obligatorily on November 1st, since at the end of October, it is the last limit for Jersey to give its answers to the requests for licenses” of the French fishermen, who have until this date to provide him with the required documents, a declared the Minister of the Sea, Annick Girardin.

“We are two weeks away from this decision [de Jersey]. Nothing is today ruled out, neither by France, nor by the European Commission “, which is negotiating on behalf of Paris with London, underlined the minister from Brussels, after an interview with the vice-president. from the European Commission, Maros Sefcovic, and the Commissioner for Fisheries, Virginijus Sinkevicius.

French Secretary of State for European Affairs Clément Beaune said on Wednesday that France would take “retaliatory” or even “retaliatory” measures “within a week or so” if Jersey did not grant no more licenses for French fishermen. In particular, it threatens to reduce its electricity deliveries to the island and to target its key financial services sector. “The Commission must list the retaliatory measures provided for in the agreement [commercial post-Brexit]. It is obvious that if the Commission does not act, if the United Kingdom and Jersey do not meet confidence, we will have to be able to act on our own “, warned Annick Girardin.

The post-Brexit agreement, concluded in extremis at the end of 2020 between London and Brussels, provides that European fishermen can continue to work in certain British waters on condition of obtaining a license, granted if they can prove that they fished there before. But the French and the British argue over the nature and extent of the supporting documents to be provided. In the still disputed fishing areas, London and Jersey have thus granted a total of just over 200 definitive licenses, while Paris is claiming more than 230, including a hundred in Jersey and nearly sixty for the neighboring island. from Guernsey.

The local government of Jersey, responsible for its fishing areas, announced Friday that it had granted two additional licenses to French fishermen, while calling for calm and deeming the threats from Paris “disproportionate”. The Minister of the Sea is due to meet officials of the island in Paris on Monday.

Weather in El Salto today: the forecast for Saturday, October 16, 2021

Weather in El Salto today: the forecast for Saturday, October 16, 2021