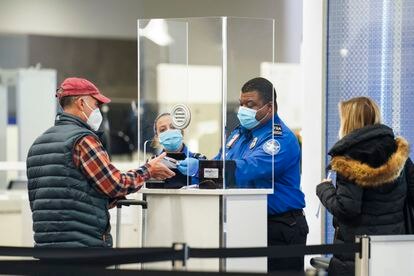 A Transportation Security Administration agent attends a traveler at a checkpoint in a terminal at LaGuardia Airport, New York.John Minchillo (AP)

It was one of the most anticipated news for the European community in the United States and their families. A recurring question in recent weeks: What exactly does that “early November“(Early November) announced as the date to lift the travel ban from the European Union imposed by Donald Trump, and maintained by Joe Biden? The White House has solved the mystery on Friday by announcing that the US will remove travel restrictions for fully vaccinated tourists from November 8.

The new travel policy will benefit tourists from the European Union, the United Kingdom, China, India and Brazil, and will end the restrictions imposed in March 2020 to stop the spread of the coronavirus. All travelers must present their vaccination certificate to enter US soil and a negative covid test done in the last 72 hours before boarding.

“This announcement and the date apply to both international air and land travel,” Kevin Muñoz, a White House spokesman, reported on his official Twitter account. The news is the culmination of months of negotiations between Washington, London and Brussels. Airlines and travel companies have also been lobbying the Biden Administration to relax restrictions that have deeply hurt the tourism industry.

Unvaccinated foreigners will be barred from entering the country, although the White House said there will be some exceptions, which will include young children. For their part, Americans who are not inoculated and who travel from abroad must test negative for covid one day before returning to the United States and show documentation that proves that they bought a test to be carried out after their arrival. Those who have never been banned from crossing land borders, such as commercial drivers, will also be required to show proof of vaccination starting in January.

The Biden government announced this week that in November the country will reopen its land borders with Mexico and Canada, after 19 months of restrictions. On the recommendation of the Centers for Disease Control and Prevention (CDC), citizens vaccinated with an injection approved by the World Health Organization (WHO) will be allowed to enter through ports and by land. ), as reported by the Department of Security.