The heart stimulant that made cocaine more deadly 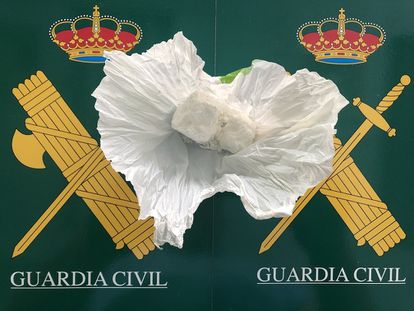 The least that consignment of cocaine distributed in the province of Cáceres in August had was, precisely, cocaine. Only 11% of its weight corresponded to this drug. The rest, as usual when it reaches the final consumer, contained other substances used by traffickers to multiply their profits. However, what had made these papers especially dangerous was the presence of high amounts of atropine, a stimulant that in low doses is used intravenously to resuscitate victims of an overdose, but in such high doses – it represented 21%, almost double that of cocaine – exponentially multiplies the risk of sudden death of the user. The National Institute of Toxicology and Forensic Sciences has now determined that it was precisely this mixture that caused the death of two people in Coria and Plasencia (both in Cáceres), and the poisoning of 15 others.

As detailed this Friday by the National Institute of Toxicology in a note, the consumption of a mixture of atropine and cocaine is “very dangerous and can cause sudden death” by multiplying the first of these substances the cardiovascular and respiratory effects usually produced by the second. In fact, atropine is a central nervous system stimulant that causes effects similar to cocaine. “In high doses, [la atropina] produces tachycardia, tachypnea, hyperpyrexia, hallucinations, ataxia or psychotic reactions, among others. In cases of extreme toxicity, it can cause secondary circulatory collapse, respiratory failure, paralysis or coma ”, adds the note. It is not the first time that its use has been detected in Spain to adulterate the drug, but it is necessary to go back to 1997 in Madrid to have news of a similar case. Then, there were nine poisonings in Fuenlabrada and Leganés, although no deaths were recorded. “We do not rule out that they have occurred more times and that they have gone unnoticed”, admits to EL PAÍS Antonio Alonso, director of the National Institute of Toxicology.

The alert about the existence of a consignment of adulterated drugs in Extremadura jumped in the second half of August after registering two deaths in the province of Cáceres with a few days of differences. On the same dates, another 15 people were admitted urgently to different hospitals in the region after presenting pictures that ranged from hallucinations to vomiting. All of them admitted to having used cocaine in the moments before suffering these symptoms. The investigations initiated by the Civil Guard made it possible to arrest shortly afterwards, thanks to the testimony of those affected, one of the traffickers who had allegedly distributed the adulterated drug. Another was arrested by the National Police.

Sources from the Civil Guard of Cáceres point out that the investigations are now aimed at determining both the origin of cocaine and that of the substances used for its adulteration and, specifically, that of atropine. Laboratory analyzes have confirmed that the remains of this substance located in the intervened papers were of synthetic origin (it can also be obtained from plants such as belladonna and jimsonweed), so the investigation indicates that the traffickers were able to provide themselves with she acquiring it either through the clandestine market that operates on the internet, or extracting it from commonly used drugs, such as eye drops, that contain it. “What we rule out is that the origin is theft in a pharmacy,” these sources point out. The Civil Guard also highlights that, after the August episodes, they have not detected new similar cases: “The main hypothesis is that the one adulterated with atropine was a single batch.” The director of the National Institute of Toxicology confirms this impression: “There is no record of any other departure.”

In parallel to the judicial investigation, the courts that are investigating the causes for the two deaths sent to the Chemistry and Drug Services in Madrid and Seville of the National Institute of Toxicology both blood, urine and viscera samples from the corpses as well as the tissue paper that they located next to them. The result of the analyzes is what has now made it possible to specify that cocaine was mixed in a high percentage with atropine, in addition to procaine and tetracaine, two substances used as local anesthetics and that are also commonly used to adulterate the drug. “The use of atropine is not new [además de en Madrid, en 1997 el Observatorio Europeo de las Drogas y las Toxicomanías alertó en 2005 de que se habían detectado intoxicaciones por esta mezcla en Bélgica, Francia, Italia y Países Bajos]But the case of Cáceres worried us because of the two deaths, given the risk that it could become a public health problem ”, points out Antonio Alonso.

Rosario Robles could be released from prison next week, says lawyer

Maradólar is here: they will launch the first “popular cryptocurrency” and give away the first 10,000 units

Maradólar is here: they will launch the first “popular cryptocurrency” and give away the first 10,000 units