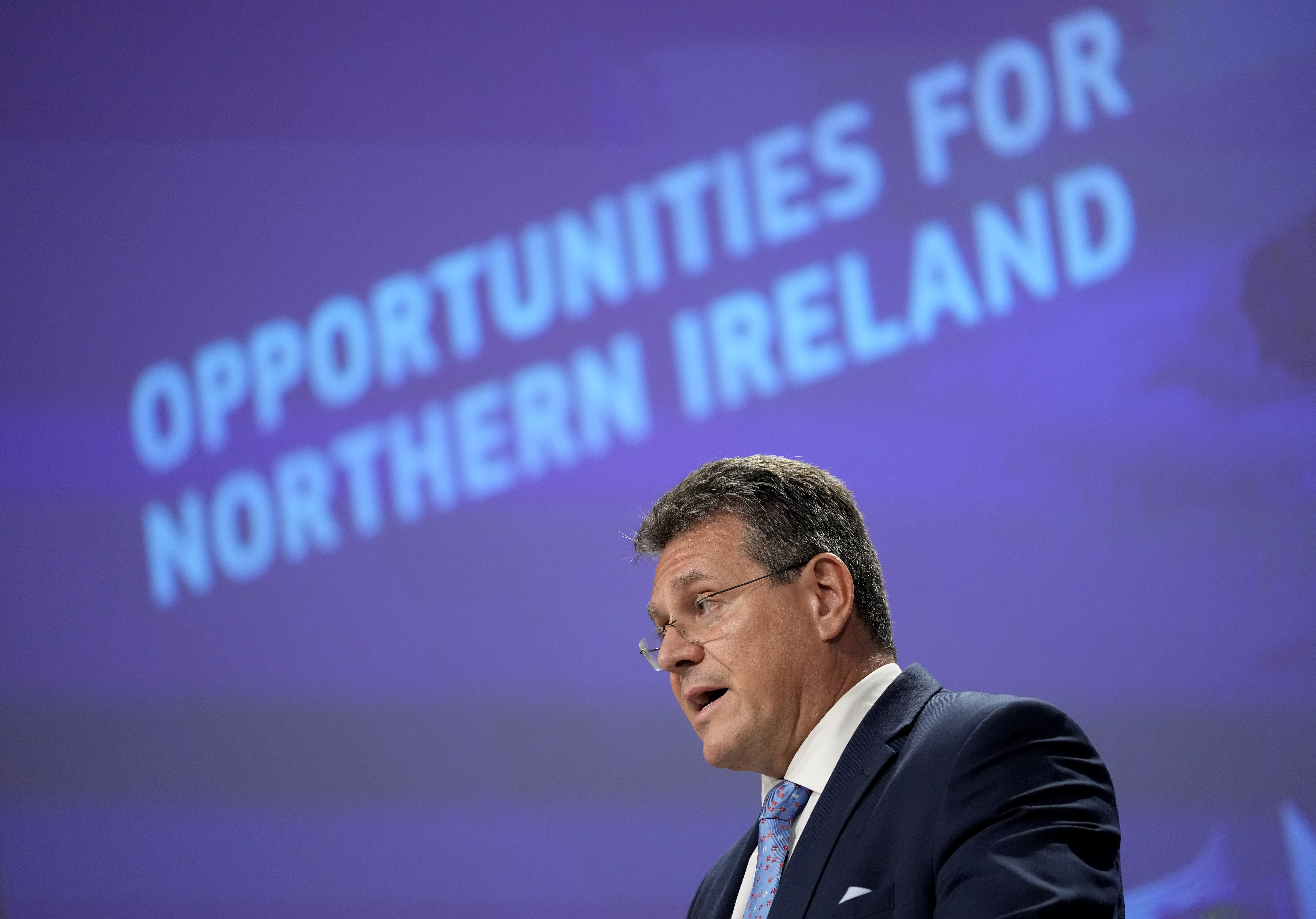 The EU hopes to find a negotiated solution with London on the application of the Brexit agreements in Ireland, but fears that the government of Boris Johnson will surprise the community club with a unilateral and sudden break from what was agreed in 2019. Just in case, according to sources diplomats, Brussels is preparing a whole arsenal of political and commercial reprisals that could hit the UK hard if it chooses to skip agreements that were painstakingly negotiated over three and a half years and ratified by both the European and British Parliament. Several European partners, led by France and Germany, advocate a very strong response to any challenge from London. Spain supports the plan despite the reciprocal damage it would cause.

The first contact between Brussels and London to neutralize the conflict took place this Friday during a working lunch in the community capital between Maros Sefcovic, Vice President of the European Commission, and the British Government representative for Brexit, David Frost. But the negotiation between the two has not even officially begun and both parties are already targeting each other with an escalation of aggression that can unleash a dangerous spiral.

The Johnson Executive has already wielded the threat of unilaterally suspending the protocol of the Brexit agreement on Northern Ireland if the EU does not agree to renegotiate most of its content. And now the EU is ready to retaliate in the event that London abruptly breaks with agreements that have barely been in force for 10 months.

The reprisals, according to the sources consulted, would target commercial interests and areas of cooperation in which the United Kingdom has a special interest, such as the judicial, security or investigation areas. “The package of measures has to be tough and credible,” says a diplomatic source. European Commission sources add that London should have no doubt that the EU will react in a forceful and united way and that any provocation will deserve a proportionate punishment.

The scenario is reminiscent of some of the toughest moments in the Brexit negotiation (2016-2021), when both parties contemplated and prepared for the serious economic problems that an exit of the United Kingdom from the EU would have caused. The parallelism is so tragically similar that the first meeting of Sefcovic and Frost has coincided with the murder in the United Kingdom of a British MP, a drama that has evoked the figure of Jo Cox, the British MP who was also assassinated during a rally of the 2016 Brexit referendum campaign.

As a sign of respect for the assassinated deputy, the European and British delegations have abstained from issuing statements to take stock of the working lunch held in Brussels. But the mourning does not hide that the tension between Brussels and London rises at times. Both parties are preparing for a possible very hot fall.

European diplomatic sources insist that the EU wishes to seek a negotiated solution to alleviate the distribution problems that have arisen in Northern Ireland since the consummation of Brexit on December 31. But the main partners of the EU consider it essential to have prepared the retaliation that would be adopted in case London decides to skip the agreements.

The need to prepare an immediate and vigorous attack, according to community sources, responds both to a deterrent objective, to prevent London from taking irreversible steps, and to the need to overcome the weak point of the European position. “The British Government knows that the EU will never impose a border between the two Ireland because the peace agreements on the island would be jeopardized,” acknowledges a community source. “This weakness allows London to launch orders such as the unilateral suspension of the agreement and the only way we have is to warn them that this violation of the agreement will not go unpunished and we will hit very hard”, they add from the Commission.

Sefcovic held a first informal meeting earlier this week with the ambassadors to the EU from Germany, France, Italy, Spain and the Netherlands. The quote, first revealed by the newspaper Financial Times, It was improvised, according to diplomatic sources, because the vice president of the Commission only wanted to test the disposition of the five big economies of the euro zone before a head-on collision with London.

The five countries showed their “100% support” for the strategy proposed by the Commission, which is based on offering maximum flexibility in the application of the Irish Protocol, but ruling out its renegotiation. Germany, France and the Netherlands, according to the sources consulted, were especially blunt about the need to show Johnson that the EU is not helpless. Spain also joined this offensive, although Spanish sources acknowledge that the deep economic ties with the United Kingdom make it advisable to seek a negotiated solution at all costs to avoid collateral damage. Italy’s support for the Commission was also absolute, but that country is the one that maintains the greatest confidence that London will not cause the rupture.

Brussels is also confident that London will agree to negotiate on the basis of the proposal presented by the European Commission, which offers the possibility of abolishing up to 80% of controls on food products and a 50% reduction in customs paperwork for business transactions between Northern Ireland and the rest of the UK. The offer also includes, among other things, facilities to guarantee the British supply of generic drugs to its Irish province.

European sources describe the offer as “very generous and positive.” And they underline that the proposals have been made despite the fact that the EU is convinced that the problems in the British province of Ireland are not due to the protocol, but to the Brexit model chosen by Johnson, which took his country not only from the EU but also the internal market and the customs union. Brussels wields as proof the fact that distribution problems, empty supermarket shelves or a lack of staff – from truck drivers to slaughterhouses for meat slaughterhouses – are not a Northern Irish phenomenon, but a general problem in the UK in the era post-brexit.

Step by step: this is how the shooting occurred at the AICM that left one dead and two injured

Step by step: this is how the shooting occurred at the AICM that left one dead and two injured