With its wings cut, Alitalia steps aside in favor of ITA 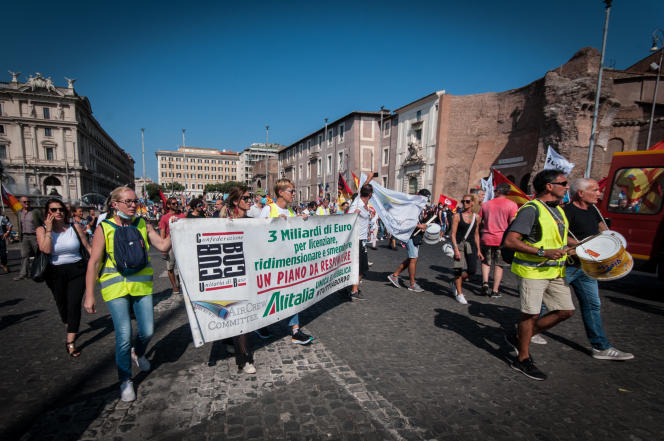 Alitalia employees demonstrate in the center of Rome on October 1, 2021. ANDREA RONCHINI / NURPHOTO VIA AFP

Unless there is a last minute delay or cancellation, flight AZ1586 was due to land at Rome-Fiumicino airport on Thursday, October 14, shortly after 11 p.m. When it comes to a stop on the tarmac and its passengers, who left Cagliari (Sardinia) an hour earlier, have left the plane, the Alitalia company, the flagship of Italian air transport, will have ceased to exist.

The next morning, at 6.30 a.m., an Airbus A319 chartered by Italia Trasporto Aereo (ITA), a public company owned by the Italian Ministry of Economy and Finance, will depart from Milan’s Linate airport for Rome, for the company’s first commercial flight. The plane will carry the colors of the national flag, but any reference to the identity of the former company will, it seems, be absent. On the first images made public by ITA, Tuesday, October 12, the planes will only bear the words “Born in 2021” (“Born in 2021”), in green, white and red letters.

Alitalia has already known a thousand deaths and as many rebirths, but, this time, nothing like it: the discontinuity between the two entities is at the heart of the new system, negotiated step by step between the Italian State and the European Commission. To materialize this change of era, the Alitalia brand itself was put on sale, for the sum of 290 million euros. So far, no buyer has shown up, and ITA has given up on buying the logo, deeming the price too high.

Alitalia experienced the euphoria of the “economic miracle”, before the era of difficulties. For three decades, the company had been plunged into a deep crisis

Founded in September 1946 in Rome, Alitalia made its first flight (Turin-Rome-Catania) on May 5, 1947, and crossed the Atlantic for the first time in 1948, bound for Buenos Aires. After heroic times, like Italy, it experienced the euphoria of the “economic miracle”, before the era of difficulties. For three decades, the company had been plunged into a deep crisis.

“In Italy, air traffic has more than tripled in a quarter of a century: there were 53 million passengers in 1997, we were at 171 million in 2019. However, since the year 2000, and if we make an exception of 2002, when the company received several hundred million euros in penalties from KLM [la compagnie néerlandaise vient de renoncer à son engagement de racheter l’entreprise], the company has lost money every year, ”explains economist Andrea Giuricin, an air transport specialist. With 11 billion euros in cumulative losses since the turn of the century, Alitalia was condemned to live on a drip.

You have 73.38% of this article to read. The rest is for subscribers only.

The broadcast of October 13: Will controversial Alzheimer’s drug be allowed? / Too many asylum seekers in emergency shelter Ter Apel / Paul Verhoeven is back / Are companies prepared for ransomware attacks?

“The stability of Europe is at stake”

Willibrord Frequin has Parkinson’s: ‘I only have a short time to live’