Where is the investigation on the eve of Cédric Jubillar’s hearing? 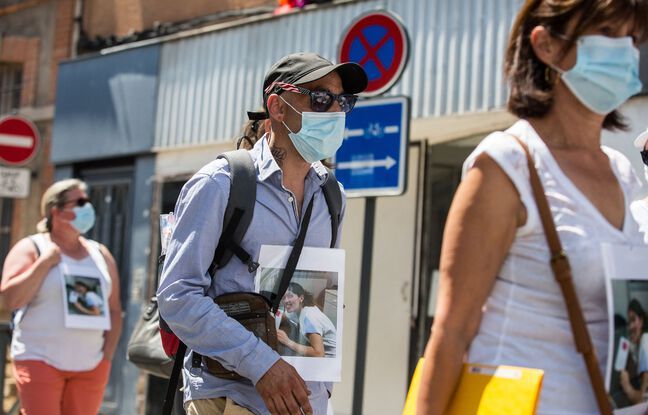 This is an appointment that Cédric Jubillar’s lawyers have been waiting for since June 18, the day their client was indicted for the murder of his wife, Delphine, who disappeared during the night of December 15 to 16 in Cagnac- les-Mines, in the Tarn. This Friday, at 9:30 am, the plasterer, who still claims his innocence, will be heard by the investigating judges.

A first hearing by the magistrates since his imprisonment almost four months ago and which will be followed by another next December. On the eve of this important day in the instruction, the husband of the nurse “is serene”, says 20 minutes his lawyer from the first hour, Jean-Baptiste Alary.

Nothing in the water analyzes

A serenity which is far from characterizing this highly publicized file, punctuated week by week by information on the current investigation, distilled in droplets, before being counterbalanced by others. Wednesday, two days before the hearing, we learned that the analyzes of the water recovered in the couple’s washing machine had not revealed traces of the blood of the missing.

It was in this machine that on the morning of December 16, Cédric Jubillar had washed the duvet where his wife slept. Laundry launched before the arrival of the gendarmes he had warned at 4:09 am, worried about not finding his wife in the house. An element to charge for the prosecution, which, without direct evidence or body, pointed to the suspicious attitude of the husband as one of the “serious and concordant clues” which led to his indictment.

However, there is no question for the defenders of the main suspect to make this element a key to the file. “For us it was not before. What is a few centiliters of water in a wash cycle with detergents when there have been 60 to 80 liters? This file is empty, there is nothing, in four months, it has not budged an iota, ”laments Jean-Baptiste Alary.

The results of the analyzes of the quilt itself are still awaited. Those of the siphon of the sink in the bathroom of a house already screened by investigators and where no trace of blood had been revealed by the luminol were unsuccessful.

The defenders of the main suspect – Me Emmanuelle Franck, Alexandre Marti and Jean-Baptiste Alary – tried last July, during a release hearing, to dismantle one by one the prosecution’s arguments. They pointed to the statements of little Louis, the child of the 6-year-old couple, who said in January that he heard his parents arguing on the evening of December 15. “But when he is heard the first time, on December 16 at 4 pm, he says that they were talking. His second audition is more than a month later, it’s huge for a child of that age, ”Emmanuelle Franck had then underlined.

She had also contested the inclusion of Cédric Jubillar’s pedometer, which had only counted 40 steps since the reactivation of his phone cut off during the night. Too little according to the public prosecutor for someone who was supposed to look for his wife everywhere, including outside. Not very convincing for the defense when you know that you have to have the mobile on you for it to record the movements. Just like the cries heard by neighbors, which according to the defense do not stick to the level of schedules.

Since the disappearance, the gendarmes have been trying to find the body of the nurse, who according to her husband could have left the house. They probed the walls of the house in Cagnac-les-Mines, searched the surrounding woods, lakes, cavities or even a coal washhouse not disused later than last week. In vain.

The latest hypothesis would be that Delphine Jubillar would never have voluntarily set foot outside the house on the evening of December 15, after having sent a last message to her lover. An article from Wednesday’s Point even indicates that the dog of the police dog team would never have tracked the trace of Delphine Jubillar outside the house. “He followed the track outside to the stop sign, then he hesitated. If it had been shown that Delphine had not left the home, the prosecutor would not have failed to say so. What is the relevance of this information that we are coldly released 10 months later, like a backfire when the water analyzes are a failure, ”says Me Alary.

Remains the suspicious behavior of Cédric Jubillar, before and after the disappearance of his wife, with whom he was in the process of separation. A situation that caused tension within the couple, especially since the appearance of the lover with whom the nurse was organizing her new life.

She had changed the access codes to her phone and on the morning of December 15, she went to her bank branch to change her bank card secret code and block access to children’s passbooks, on which their father regularly took money.

Suspecting an affair, Cédric Jubillar had tried to geolocate his wife, but she had realized it. He had also consulted his accounts on several occasions to find out his expenses. Mad with rage against him, he even said to relatives, including his mother, that he was going to kill and bury her. A mother who after defending her son recently expressed doubts about his innocence. During a clairvoyance show on a radio, she explained that she was convinced of her son’s guilt, before going back. “She is lost, in search of the truth, if she had certainties she would not have recourse to clairvoyance”, counterbalances Jean-Baptiste Alary, whose client is increasingly alone.

In solitary confinement, he no longer has any contact with his children or with his relatives. On several occasions the investigation chamber refused to release him, indicating that he was particularly likely to put pressure on witnesses or on his son Louis. For his lawyers, it is rather Cédric Jubillar that we are trying to put under pressure. In the meantime, they remain convinced that their client must be released if no new evidence is added to the file. “Like Jacques Viguier”, quotes Jean-Baptiste Alary, in reference to this Toulouse law professor, acquitted twice of the murder of his wife Suzy, whose body has never been found.