The archeologist Henri Breuil (1877-1961), known as the Pope of Prehistory for being a priest, sinned seriously upon arrival in 1915 at the Minateda site (Hellín, Albacete). The abbe began to study the so-called Great Coat, on whose walls there were more than 500 figures of animals and human beings painted from the Epipaleolithic (8,000 BC) to the Bronze Age (1,800 BC). He copied them and made the discovery public, which was soon considered one of the great landmarks of Levantine rock art. What was unknown is that the French had taken 16 fragments of that cave art to France, one of them a large deer that he ordered to be pulled from one of the shelters (that of the Canalizo del Rayo) and of which he only left a hole in Wall. The archaeologist Alexis Armengol has discovered where they all ended up: in the warehouses of the National Archaeological Museum of Saint-Germain-en-Laye, city in northern France.

In his master’s thesis Historiographic analysis of the rock art of the Minateda complex: evolution, problems and debate, Armengol recalls that the discovery of the paintings can be reconstructed through the correspondence that Breuil maintained with Federico de Motos, his Spanish assistant. In it, the Frenchman speaks of the “wonderful encounter” that his discovery entailed. “There are more than three hundred figures [en realidad más de 500] on a surface of eight meters of very hard stone: the figures consist of deer, horses, goats and figures of men with arrows, feathers, spears, etc., also having quite a few figures of women. I think it is the best known so far in Spain, even including the one from Altamira“, wrote.

From the first moments, the paintings were wet and moistened to “see them more clearly”, which quickly degraded them. “Most of the figures appear somewhat opaque at first glance, but wetting them greatly increases their visibility. This wetting is usually carried out by passing a damp cloth or sponge, but this practice harms the paintings when rubbing them together with the dust that is deposited on them, it has been replaced with the use of a sprayer that avoids such inconvenience. However, the salts dissolved in the water, especially if it is of poor quality, in the long run must harm them, it should not be allowed to use other than distilled, or very pure as rain ”, relates a news story from a local newspaper of the time following the discovery. 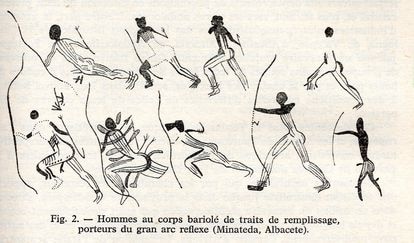 Rubbings of archery figures belonging to the Abrigo Grande de Minateda, made by Breuil in 1920.

Joaquín Sánchez Jiménez, curator of the Albacete Museum, He visited the cave in March 1928 and verified the veracity of the damage that the local press described as being committed by “intellectual looters who tried to remove stone slices from the shelter.”

Unfortunately, Breuil did not document the Canalizo del Rayo deer, not even in rubbings or photographs, but this did not discourage Armengol, who began to trace the pieces from the documentation that came to his hands. “We do not know if the event transcended,” says the archaeologist, “but the situation had to be repeated many times.” Breuil wanted from the first moment to publish a monograph on Minateda, presenting rubbings in large color plates with descriptions of all the figures. But due to the workload he was supporting, he requested the collaboration of the Spanish archaeologist Eduardo Ripoll to be able to fulfill its objective.

In 1955, the French abbe was associated with the English publisher Arnold Fawcus, owner of the Trianon publishing house. In it, Breuil and his collaborator Mary E. Boyle they published numerous full-color rubbings of the cave paintings they had discovered in South Africa (the abbe traveled the world looking for these types of paintings). His idea was to make a publication on Levantine art under the same conditions as South African. But the French prehistorian died in 1961, and the bad relations between Fawcus and Ripoll led them to break up in 1962. 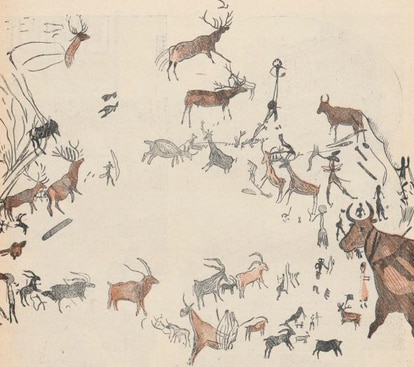 Animal figures from the left side of the Abrigo Grande de Minateda, in an image published by the French magazine ‘Floreal’ in 1920.

The discrepancies had arisen from the proceedings of a symposium in 1960. When all the communications were to go to press, a threatening letter was received from Fawcus prohibiting publication of the paper. He claimed rights to the Frenchman’s work. Ripoll told it like this: “Fawcus became the jealous guardian of what he considered to be his copyright over the abbe’s documents.”

In 1974 Mary E. Boyle died and the papers, letters and an unpublished biography of the abbe passed into the hands of Fawcus. When the latter died, his widow donated them to the National Archaeological Museum of Saint-Germain-en-Laye. The abbe’s legacy was, however, widely dispersed and many documents went to the National Museum of Natural History in Paris, an institution that offers a very broad vision of both scientific production and documentation. 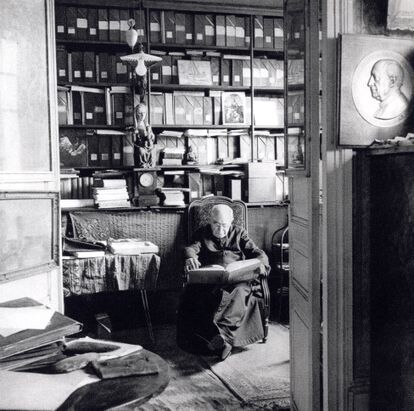 Henri Breuil, in his Paris office in 1956, Singer Polignac

Upon reviewing the JOCONDE database of the Saint-Germain-en-Laye National Archeology Museum, which is accessed through an open platform, Armengol found the doe pulled by Breuil. “There is no doubt that it is the piece we were looking for, highlights the transcription error of the place, transforming Canalizo del Rayo into Barranco del Raego. The description of the property confirms our suspicions, since, according to the description of the file, it belonged to the abbe’s private collection, which became state property through donation ”. But the archaeologist’s research went further and also verified that “the collection of Spanish rock art deposited in the National Archaeological Museum consists of 16 fragments”, from Minateda (Albacete), Cueva de las Sierpes (Fuencaliente, Ciudad Real), Covatilla del Rabanero (Solana del Pino, Ciudad Real), Quintanilla de San García (Burgos), Garcibuey (Salamanca), Chair Wraps (Hornachos, Badajoz) and Las Batuecas (Salamanca).

“The importance of the 16 fragments of looted rock art”, asserts Armengol, is “a milestone that will mean the beginning of research projects that will include dissemination through new publications, actions leading to the repatriation of goods through agreements or agreements with the French Government or the reintegration of said figures through digital techniques and the use of augmented reality applications ”. The Junta de Castilla-La Mancha, according to Armengol, should consider the return of all the pieces. The Excavation Act of 1911 (Royal Decree of June 2) already prohibited the exit of archaeological objects abroad without the pertinent authorization.