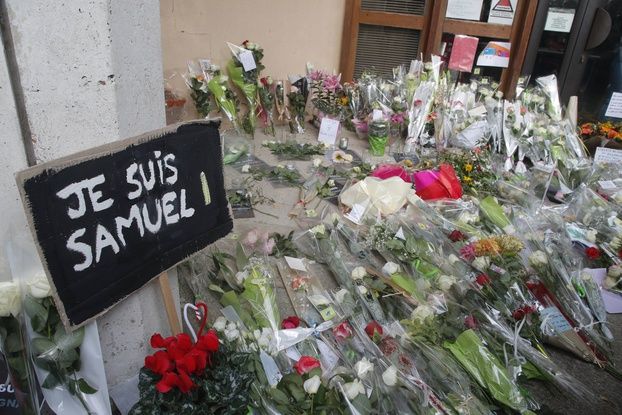 It was a classic course. Banal, almost. As Samuel Paty dispensed dozens of during his career. A moral and civic education course on freedom of expression which will become the pretext for an outburst of hatred and will lead, eleven days later, on October 16, 2020, to the beheading of this history teacher. How did this education, given in an establishment in Conflans-Sainte-Honorine, a hitherto uneventful village of Yvelines, take on such a tragic dimension? Why did Abdullakh Anzorov, an 18-year-old Chechen who arrived in France at the age of six, attack Samuel Paty, whose existence he was unaware of a few days earlier?

A year after the attack, the investigators set out to reconstruct the scenario of the tragedy, the tragic cycle that took place during the week and a half that elapsed between the course and the assassination, as well as the complicity, sometimes fortuitous, from which the terrorist benefited. Fifteen people, including seven minors, were indicted in this case. “The investigation has progressed rapidly, for sure, but it is far from over,” says a source familiar with the matter. In an investigation like this, you have to open every door, identify all the people who may have been able to provide support, those who have put ideas in their head, who may have been aware of certain things. The risk, otherwise, is that others may be tempted to take over. “

A controversy that quickly exceeds the local sphere

Return on October 5, 2020. That day, Samuel Paty gives his course on freedom of expression during which he presents a few caricatures of Muhammad, originally published in a Danish newspaper and republished by Charlie Hebdo in 2006. So as not to shock the public. Muslim students, he suggests that they close their eyes, look away or go out for a few moments. The hour passed without difficulty, but two days later, the teacher was attacked on social networks by Brahim Chnina, the father of a student. He claims that his daughter was expelled for refusing to leave the classroom, and accuses Samuel Paty of Islamophobia. If he does not call for violence, he gives the name of the teacher and that of the school. Two other videos will follow, including one made with Abdelhakim Sefrioui, an activist S file for his radicalization.

The story described by the two men is however far from reality. That day, the schoolgirl in question was absent, excluded for behavioral problems. “What is disturbing is that she reiterated her lie for a long time before admitting that her dismissal had nothing to do with this course”, underlines one of the lawyers of the Paty family, Me Virginie Le Roy , recalling that the mother of the teenager – separated from the father – had signed the note informing her of her dismissal.

The words may be false, the video is circulating at high speed on social networks. On October 9, a radicalized young woman in her thirties living in the Nîmes region posted her on Twitter under her nickname “Sweet scar”. Anzorov contacted her a few hours later by private message, asked her about the veracity of the facts… and began to research this affair. This mother of two, arrested in June, was indicted for “terrorist criminal association”.

The gears of social networks

The same day, the terrorist contacted Brahim Chnina. The procedure made it possible to exhume several written and telephone contacts – the content of which is however unknown – between the terrorist and the student’s parent. These exchanges will end on October 13 … that is, three days before the attack. Prosecuted for “complicity”, the latter said he was unaware of the terrorist’s intentions.

The case of Abdelhakim Sefrioui is different. The investigations did not prove that the terrorist had viewed his video or that he had had any connection with him. Can we therefore speak of complicity? Before the summer, this radical activist saw his indictment for “complicity” confirmed by the investigating chamber of the court of appeal. His lawyer, Me Elise Arfi, now intends to appeal to the Court of Cassation.

Little by little, the trap closes on the teacher. Three days before the attack, Anzorov goes to Rouen with Azim E., 19, a friend of Evreux where he lives, to buy the knife that will be used to commit the crime. The next day, another relative, Naïm B., 18, accompanies him to buy two airsofts. It is he also who will deposit it in front of the establishment, a few hours before the assassination of Samuel Paty.

The circle of “college students”

Yes, but there you go. The terrorist has no idea of ​​Samuel Paty’s physical appearance. This is where a final circle of complicity comes into play, that of “college students”. As soon as he arrived in front of the establishment, around 2 p.m., Anzorov approached a student, M., offered him 300 to 350 euros so that he could appoint the teacher. Quickly joined by five friends – two others will try to dissuade them – they will stay nearly three hours with the terrorist, separating for a moment into two groups to escape a round of the municipal police. Invariably, during his hearings, M. denied having knowledge of his project, confident that he had been attracted by this promise of easy money. He nevertheless admits that Anzorov confided to them that he wanted to film the teacher begging the Muslims for forgiveness after having “soiled” their image.

“Obviously the presence in this type of investigation of minors so young is very shocking,” notes Me Virigine Le Roy. But we must not forget that some of them knew that Samuel Paty would at least be filmed being molested. Until October 16, none of these five teens had been talked about, if not for some, for some discipline problems. Indicted for complicity, all continue their education in other establishments while waiting to know if, at the end of the investigation, they will be referred to the court of assizes for minors. Considering their age, they risk twenty years of criminal imprisonment.

More than 30 thousand children are recruited into drug trafficking

López Obrador, faced with questions about his health: “I feel good”

Gims and Bella Hadid are in the Fil des Stars

United Kingdom: Boris Johnson participated in a party for his birthday in full confinement

More than 30 thousand children are recruited into drug trafficking