The 32 hours, the idea that the left lacks to regain control? 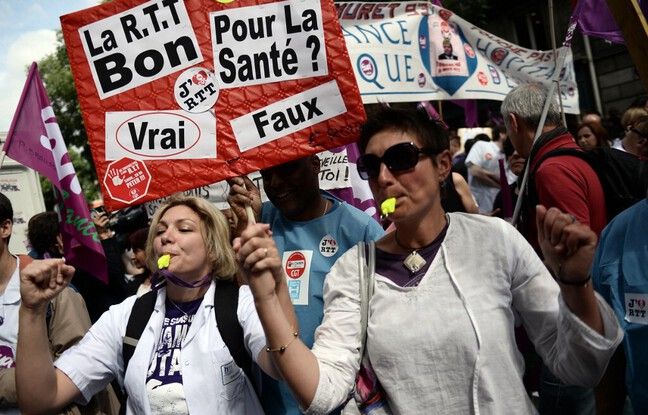 It is a proposal for several hundred thousand jobs, it has already been put in place in the past and yet passes for iconoclastic: what if the reduction of working time was the left martingale for the next presidential election? The subject was, surprisingly, put back on the table by the probable socialist candidate, Anne Hidalgo. “Raising the issue of working time is obvious (…) Working conditions have deteriorated a lot, teleworking has gained momentum [donc] you have to ask the question of how you share your time, ”she said on France 3 on Sunday.

Admittedly, it is indeed the PS which, in 1997, was elected on the project of 35 hours, set up at the turn of the 2000s. But the party was careful not to postpone the reduction in working time. forward since. Thus, during Holland’s five-year term, it was never discussed. On the contrary, the 32 hours have been in the program of the Greens and then of EELV for very long years. Ditto for La France insoumise. Advocates of the idea – among others – believe that this is part of the solution to unemployment: studies showed that the 35 hours had created 350,000 jobs.

This is a strong subject, at a time when the left seems to be struggling to stand out with a “great story”. It is “a real project of society which can divide with the right”, estimates Clémence Guetté, the coordinator of the program of rebellious France, contacted by 20 Minutes. What is more on the economic and social theme, where the left is more at ease than on identity and security … which dominate the start of the pre-campaign.

A few months ago, the director of study at Ipsos, Mathieu Gallard, explained to 20 Minutes that there was a key here: “If the campaign is based on identity issues, indeed for the left it will be extremely difficult. But if a leftist candidate manages to make the campaign unfold above all on economic and social issues, purchasing power, unemployment, the social protection system in the post-epidemic context, that can change a lot of things. . “

A reversal of opinion?

Is the reduction of working hours the right subject to regain control? The atmosphere of the last presidential campaigns held more of the 35-hour unraveling contest. Faced with “the value of work” praised by the right and part of the left, the reduction of working time is considered “a debate almost prohibited in France”, believes the political scientist at the Kedge Business School, Virginie Martin, interviewed by 20 Minutes . “These are themes that are struggling to pass the ramp in France, which have difficulty in gaining credibility. The battle for public opinion has been lost. “

The idea that in France we work little, at least less than we should, has taken root. Until the President of the Republic: France is “a country which works less than the others”, affirmed Emmanuel Macron during the presentation of the France 2030 investment plan. Sandrine Rousseau had made the 32 hours one of the strong themes of his campaign in the environmentalist primary. Thomas Portes, one of his spokespersons, recognizes that on this issue “the left is against the tide against editorialists and political leaders of the far right, the right and even the center”. He believes that they are in the minority: “Around you, no one says they are lazy or that they do not work enough! “

Thomas Portes thinks that in recent years the flies have changed donkeys on this subject. That the health crisis – and all that it has upset in the world of work – has changed the situation and allows the left to “reimpose this theme which is a marker of its history”. A proof of this new state of affairs is perhaps, despite her defeat, the very good result recorded by Sandrine Rousseau in the environmentalist primary: “It is indeed the proof that another story can be heard”, analyzes Virginie Martin , who finds the left still very shy. “Most often the candidates are cautious, take worn-out ” working ” themes: it’s easier to talk about Islam than about a difficult subject like working time. It will take courageous candidates! “

Anne Hidalgo, she remained cautious: “She spoke neither of the 32 hours nor of the four-day week, tempers with 20 Minutes her support and PS president of the Seine-Saint-Denis departmental council, Stéphane Troussel. It raises the question of working time in a more general debate on the place of work in society. All the same, now no left-wing candidate seems to oppose the reduction in working hours. Even Arnaud Montebourg has no “dogmatic position” and has “no problem with this debate,” said one of his relatives at 20 Minutes, although the former minister puts the priority on the increase. wages – “and the inflation of energy prices proves us rather right”.

So, the reduction in working time left an alliance factor? Stéphane Troussel believes it: “It is a unifying theme for the whole of the left. “And to abound:” There will be debates on the priority given to the salary or to the working time … I believe that Anne Hidalgo is the point of balance to apprehend the question. Not sure everyone understands it that way. Already on the method everyone does not agree: Anne Hidalgo and Yannick Jadot, for example, do not want a law on the reduction of working time (as for the 35 hours) but negotiations by branch. Clémence Guetté is more radical and Thomas Portes wants the 32 hours to be imposed by political power.

Never mind: if ever the left had finally found something to grind on a subject really to it, it would already be a hell of a breath of fresh air for the gaggle of candidate to the left of Emmanuel Macron, currently suffocated by the predominance of identity and security themes.