“Put sport at the heart of the nation”, the wish of Emmanuel Macron within three years of the Paris Olympics 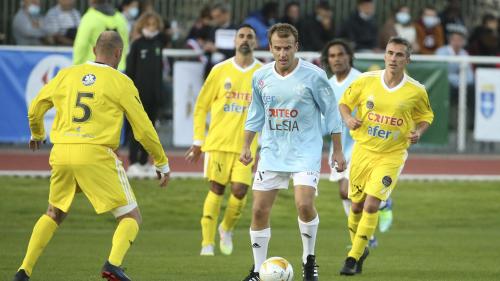 Emmanuel Macron announced Thursday, October 14 a “huge boost” to “put sport at the heart of the nation” by the 2024 Paris Olympics with the construction of 5,000 local facilities, before paying in person by playing a charity football match with the Varieties Club de France.

The president, who had already participated in training for Olympique de Marseille at the start of his mandate in 2017, put on his crampons again on Thursday, October 14 in Poissy (Yvelines) for the fifty years of Variety (VCF). In a sequence broadcast live, Emmanuel Macron even scored a goal, a penalty, shot full center.

The match pitted the Varieties – including former footballers Alain Giresse, Robert Pires, Christian Karembeu – against the team of caregivers from the Poissy Saint-Germain-en-Laye intercommunal hospital. Its recipe was donated to the Fondation Hôpitaux de Paris-Hôpitaux de France, chaired by Brigitte Macron. The members of the VCF were then expected at the Elysee Palace for dinner.

Earlier in the day, from Tremblay-en-France and the department of Seine-Saint-Denis, the poorest in France, he recalled the “legacy stake” of the Olympics in terms of equipment. “The objective is not simply to have medals, it is to put sport at the heart of the nation”, with a view to the Olympics “but also afterwards,” he said, alongside young people 3X3 basketball players.

Emmanuel Macron praised a sports plan “good for the whole nation”, which will “give a huge boost to practices” by 2024. Will thus be built, with “at least 50%” of funding provided by the State, 1,000 “citystades” (multisports grounds), 1,000 dojos and combat sports halls, 500 3X3 basketball courts to boost practice, 500 padel tennis courts, 500 skateparks, 200 mobile sports sites such as pools, or even “innovative” equipment using digital technology. “This plan comes a little late, it should have been initiated in 2018 with a view to a sporting legacy”, reacted to AFP deputy Régis Juanico (Génération.s), who finds that “it makes a little catching up “.

Asked also about the criticisms of his remarks, the day after the Tokyo Olympics, urging French athletes to “do much more” in 2024 in terms of medals, Emmanuel Macron regretted “journalistic comments”: “I did not saw a lot of athletes shaken by what I said, “he said. “We took stock and re-mobilized. That’s what all coaches do every day with their team, that’s high-level sport,” he said. France reported just 33 Olympic medals from Tokyo, below the score of 42 obtained in Rio in 2016.

For Paris-2024, the president had mentioned in mid-September the objective of “Top 5” nations, or about 70 medals according to the Tokyo ranking. A goal considered very ambitious by some, such as boxer Sarah Ourahmoune, vice-president of the French National Olympic and Sports Committee (CNOSF) and vice-Olympic champion in Rio, for whom it should rather be “50/60 medals”, had- she released Tuesday evening during a debate at Sciences Po.

The UPV shooter bought the shotgun online, did target practice and attacked the university in less than 10 hours

The UPV shooter bought the shotgun online, did target practice and attacked the university in less than 10 hours