In the altarpiece of “The Mystic Lamb”, the hands of the Van Eyck brothers finally unraveled

The restoration of the majestic altarpiece of the Mystic Lamb never ceases to reveal surprises. Started in 2012 by the Royal Institute for Artistic Heritage (IRPA) with the support of the University of Antwerp, this has already made it possible to find, on the closed polyptych (completed in 2016) then the open polyptych (completed in 2019), the extraordinary finesse and luminosity of Jan Van Eyck’s painting, masked under repaints from the 16th century.

The restoration also made it possible to restore the original polychromy of the frames, hidden under a brown paint. And now, the scientific analyzes and imagery carried out on this occasion have just made it possible to distinguish for the first time the interventions of Hubert and Jan Van Eyck.

For a very long time, art historians have wondered about the respective shares of the two brothers in this work commissioned by the wealthy churchwarden of Saint John’s Church in Ghent, which later became Saint Bavo Cathedral. Inscribed in Flemish on the lower frame of the closed altarpiece, a quatrain indeed indicated this: “The painter Hubert Van Eyck, the greatest there is, began this work. His brother Jan, who succeeds him in this art, completed this arduous task at the request of Joos Vijd. With this verse, he invites you on May 6 (1432) to admire this creation ”.

However, the authenticity of this inscription seemed uncertain. In 2020, the restorers of the IRPA first proved that it was very contemporary with the making of the altarpiece. The hands of the two brothers remained to be untangled: Hubert, the eldest, who died in 1426, then Jan his younger …

About fifty faces painted by Hubert

Thanks to stereomicroscope analyzes, conservators have been able for several years to thoroughly analyze the details of the various panels. New imaging by infrared reflectography and X-ray macrofluorescence also made it possible, after the removal of the late repaints, to examine the various original pictorial layers.

On the central panel of the altarpiece where the lamb sits on an altar, surrounded by angels and a crowd of holy figures, a “rather elaborate underlying painting has been discovered”, now attributed to Hubert Van Eyck. He therefore did not content himself with developing the overall design of the altarpiece as had been previously believed. He represented, on this central panel, a sky, on a hilly landscape bristling with buildings and below a vast meadow with already the altar, the lamb, the angels and many figures in the foreground, around a source. natural.

Jan Van Eyck, taking over from his deceased brother, transformed this source into a monumental and refined fountain. He also overpainted the sky in azure blue with a colorful halo, and the landscape where he added trees and buildings such as the Cathedral of Utrecht, the former Abbey of Saint Bavo and the Church of Our Lady of Bruges. , flowers in the meadow. But he has carefully preserved about fifty figures painted by his brother in the foreground, while retouching a few others and attaching them kneeling figures.

The close-up photographs of these faces, and in particular of the eyes, indeed reveal two very different styles. Those attributed to Hubert Van Eyck, although already very realistic, with their small fine lines, are of a somewhat coarser execution. While Jan Van Eyck’s brush painstakingly detailed each lash, rendering the eye sockets damp, their edges slightly reddened and even the slight reflection in the pupils. 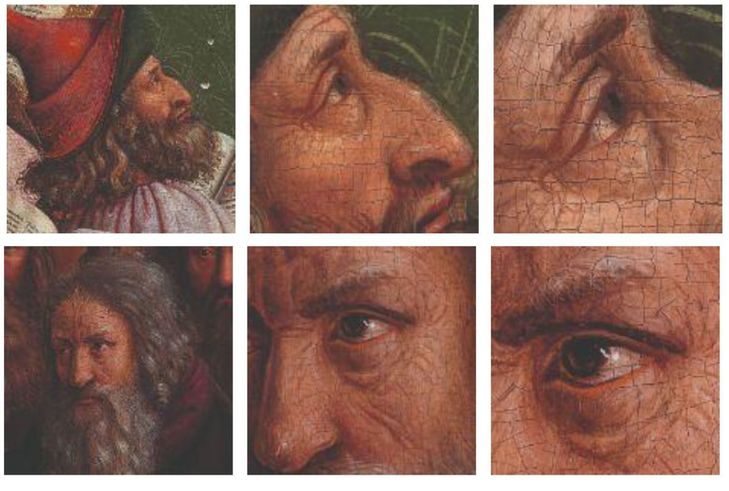 Between the eldest and the youngest, a revolution has taken place, that of the Flemish Ars nova which, thanks to the perfect mastery of the new oil painting, will excel in the illusionist rendering of materials and light effects. . Identifying this gap and Hubert Van Eyck’s singular manner may in the future allow him to discover other works by his hand, when none were known to this day.

Conservators have also discovered amazing additives, such as finely ground colorless glass, perhaps intended to further enhance the shine of this paint. They finally identified, still on the central panel, a third phase of overpainting, probably added after the death of Jan Van Eyck in 1641, perhaps by his assistants. The dove of the Holy Spirit, for example, was then enlarged and endowed with radiating golden rays.

A final phase of this monumental restoration, this time concerning the upper register of the open polyptych, should begin in 2022. Thanks to sponsorship from the Baillet Latour fund, which finances this final step at 20%, alongside the Flemish government’s Heritage Agency.

“The Gregorian reform structured all of medieval society”