Goya, star of the new exhibition hall of the Bank of Spain

The veins, the tendons, the bones of whitish hands, untouched by manual labor, made to manage economic power. Francisco de Goya in 1785 he painted the hands of José de Toro-Zambrano y Ureta “With anatomical perfection in the first portrait commissioned by the Banco de San Carlos for this manager of the entity,” highlighted this Wednesday the art historian Manuela Mena, perhaps the most authoritative voice on the Aragonese artist’s work, in the presentation of the exhibition that he would curate with Yolanda Romero and with which the Bank of Spain opens a permanent exhibition hall at its headquarters in Madrid. King Felipe has inaugurated this exhibition, titled 2328 reales of fleece. Goya and the origins of the Banco de España Collection, which can be visited until February 26, 2022 and features the genius of Fuendetodos and the five portraits commissioned by the institution. The BE had not shown these works to the public since 1982.

Romero explained that this new space, which the BE wants to be another link in the Paseo del Arte, next to the Prado, Thyssen or Reina Sofía Museums, “is in the heart of the bank, at the original entrance, under the clock ”, and it is accessed by the chamfer that overlooks the Plaza de Cibeles. It is a free cultural offer, for which you have to reserve a ticket on the bank’s website. The exhibition, whose title responds to the payment made to Goya for the De Toro-Zambrano painting, “is the first step to share the artistic and documentary collection.” On this occasion, from 1782, when the Bank of San Carlos was founded, until 1856, when it was renamed the Bank of Spain, after the merger between the Bank of San Fernando, which had succeeded that of San Carlos, and that of Isabel II. . The BE collection totals “about 4,000 pieces and there are already exhibitions scheduled until 2024,” added Romero.

When Goya painted these commissions, he was not yet the recognized master he would later become, “although he had entered the San Fernando Academy of Fine Arts by acclamation, in 1780,” Mena pointed out. Perhaps for this reason, the 10,000 reals of fleece that he pocketed for his work “does not mean that he was paid especially well”, according to Romero, who interrupts his explanation by the chime of one of the three precious clocks, two of them table clocks, that is in the exhibition, “and that it cost 1,500 reais to the bank,” he adds to compare its price with what was delivered to the artist. They are the clocks that the directors of the entity heard when they dispatched and made decisions. 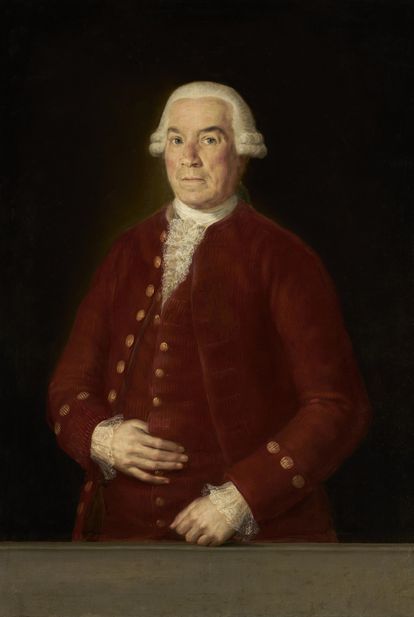 Romero also recalled that for a time Goya lost the authorship of these portraits because they were saved and were not signed. It took more than a century for, in 1900, the bank could prove, thanks to the books in which the orders and payments were recorded, that they were theirs. The main room of the exhibition is presided over by the courtly portrait of José Moñino y Redondo, first count of Floridablanca, in which the Aragonese painter was included, in profile and at a smaller size, next to the character, fundamental in the creation of the bank. “It is something very rare, but it means that Goya already had a knowledge of his value as an artist.”

Mena stressed that these canvases show an evolution of Goya, “drier in early portraits”, to the dazzling oil painting by Francisco de Cabarrús, from 1788, the last of the author of The naked maja for the bank. In it he painted Cabarrús full-length, “with a silk suit, apple green, the color that symbolizes money, and his tripon, which indicates that, although it ennobled the portrayed, he entered the character.” He also dared to do this with King Carlos III, in a portrait of 1786, commissioned by the bank, in which he showed the monarch with marked wrinkles on his face, tanned by the sun of hunting days, which contrasts with his white forehead. , which was usually covered by a hat, and hanging fur around the neck. They are always works with symbols, as in the painting by Francisco Javier de Larumbe y Rodríguez, from 1787, half-length, which in the left hand holds the baton of the bank directors while the right is hidden in the jacket, “the gesture of the characters with intellectual interests ”.

There is a space in the exhibition dedicated to the historian Juan Agustín Ceán Bermúdez, also painted by Goya, who as a senior official of the Secretariat was the one who had the wisdom to commission the portraits from the Aragonese. As Mena contemplates these works, she has no doubt that Goya “had soaked up Velázquez.”

Besides goyas, The tour includes “works that were part of the bank’s oratory, which were installed for employees to hear mass,” added Romero; a way to prevent officials from wasting time from work. Among them stands out the Lily virgin, by Cornelis van Cleve, from about 1550, which the bank acquired in 1787, and a cast silver cross presiding over official oaths. 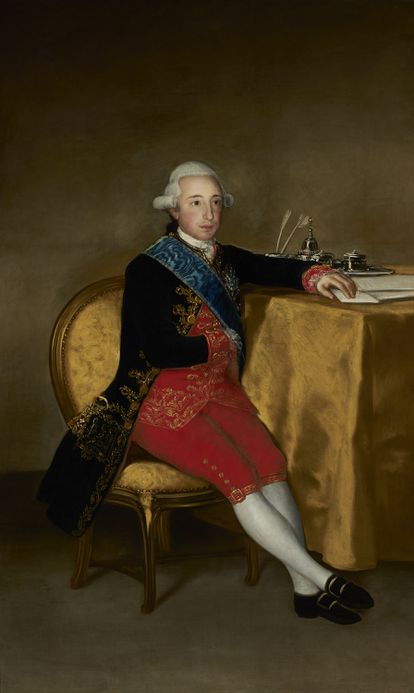 Along with art, several showcases display almost a hundred documents from the BE Historical Archive, some fundamental in the institution’s history, such as the royal ID of 1782 by which the bank was created, then a public limited company with private capital; the illuminated cover of the first book of agreements of the boards and copies of the first issue of banknotes in Spain, of March 1, 1783, designed with delicate watermarks and with the particularity that, as today, each value had a different color, “A novelty that the Banco de San Carlos incorporated,” says Romero.

Among the decorative elements, the ballot box of the Banco de Isabel II, used for the entity’s leaders to vote on decisions. And a furniture symbol of power, the memorial table of the Council of Ministers from the time of Fernando VII, with eight drawers, one per minister. “Its small size suggests that the meetings should not last long,” says Romero. Something logical if the one who had the last word was the absolutist Fernando VII, who appears portrayed by Vicente López Portaña with a bloated face, months before his death in 1833.