All the nursery schools (from zero to three years) in Galicia, public and private, will be free next year for both first-born and second and successive siblings. It was announced this Wednesday by the president of the Xunta, Alberto Núñez Feijóo, in his intervention in the first State Debate of the Autonomy of the legislature, highlighting that the decision is a pioneer in Spain. The measure, which will initially be financed with 30 million euros per year, represents the extension of the one adopted for the 2020-2021 academic year by the Galician Government, which contemplated gratuity for second siblings but not for older ones.

The Galician president has reproached the central government for not wanting to “co-finance” a measure that will be implemented in public schools, those of social initiative, private and municipal schools that are up to date with their obligations with the Galician Consortium of Equality Services and wellness.

The Ministry of Education and Vocational Training announced last May an investment of 670 million euros from the endowment of European funds to create 64,000 new places for children under three years of age in schools that will be managed by the autonomous communities or by opening classrooms in schools already existing.

The Department of Social Policy of the Xunta estimates that the new measure will benefit more than 20,000 children compared to the 12,500 who were able to access for free last year. 30% of those benefited are enrolled in private centers.

As up to now, the Xunta will finance 100% of what private schools charge families for educational attention – it does not cover the cost of dining rooms either in public schools – up to a maximum of 260 euros per month. In the event that the enrollment of the center is higher, the school is obliged to lower the price or it will not be able to adhere to the regional order. However, the Ministry of Social Policy ensures that in the past year 496 of the 499 private schools in the community joined.

The Galician president has linked this measure to the demographic challenge that he has defined as Galicia’s main problem. The announcement comes after last August the CC OO union accused the Ministry of Social Policy of “lack of foresight” in the opening of these schools. 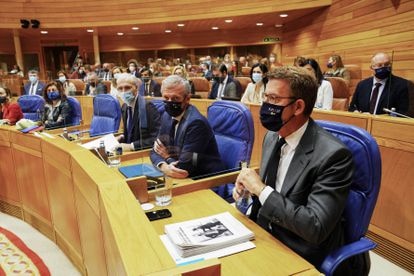 The president of the Xunta de Galicia, Alberto Núñez Feijóo, this Wednesday during the debate on the State of Autonomy of Galicia, in the Galician Parliament. Álvaro Ballesteros (Europa Press)

The union warned that there was not enough material or human resources to comply with the return to activity protocol, almost six months after having closed its doors due to the outbreak of the pandemic. In the opinion of CC OO, it was essential to reduce the ratio of children per classroom, increasing the number of educators since, they claimed, there was one educator for every 20 children under three years of age.

In this same line, in your report Where it all begins on early childhood education from zero to three years the non-governmental organization Save The Children argues that it is necessary “to incorporate extra professionals into the groups –with formulas such as the second part-time professional or the educational partner– that allow the ratio to be reduced without increasing infrastructure costs.” It also demands the endowment “of financing or extra personnel or reductions in the ratio to nursery schools that enroll disadvantaged students or with special educational needs” as well as promoting the “presence of personnel in schools from minorities, in a way that reflects social diversity and cultural environment, to overcome the distrust of families ”. And he warns that in order to achieve the universalization of education from zero to three years in Spain, 39,000 places would have to be created annually for a decade.

The organization is not in favor of total gratuity and understands that, as in the Nordic countries, it is better to have more places than few free. Bet in this sense because tuition fees are paid based on income.