“Bringing faith to life in the heart of houses”

From our regional correspondent 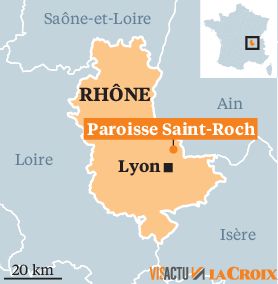 “How many people need and want to grow spiritually but dare not push the door of a church? It is from this intuition of our priest, strong and beautiful, that the “p’tits groups” project was gradually born, during the year 2019. If the idea was far from being new, since it corresponds to what Jesus has always told us and responds to the call of Pope Francis, it was still necessary to implement it in our territory! After a time of reflection, we chose to experience small intergenerational groups of faithful to discuss, share, and pray together regularly. The goal? To make faith live and known in the very heart of houses.

Following the first four meetings organized during the Lent period, a pilot team was formed to define the final contours of the initiative, starting with its name. Our choice naturally fell on “small groups” because this perfectly reflects the idea: a project whose key word is simplicity, which must be open to everyone and does not require any knowledge or skills. prerequisites. When the first season started, in November 2020, a few small committees of six to eight people agreed to meet twelve times a year, in the household of their choice. Today, these meetings concern around 190 people, or 32 groups!

During this time, which usually lasts an hour and a half, nothing is imposed but we provide a kit that allows you to be guided, from fraternal discussions to prayer time, to sharing testimonies after the joint viewing. of a video. If the objective is that each parishioner can maintain his spiritual growth and find his place in the Church outside the Sunday gathering, we also and above all hope to go beyond certain borders: by bringing back a person who had moved away from it or by inviting a neighbor or a friend who did not know her. During the confinement, one of the participants, for example, invited a woman met by chance in the courtyard of his building, and what she testifies today is formidable!

A “small group” is above all a means of stimulating each other to open up to as many people as possible, and my husband and I were keen to carry this project, especially after having lived a strong experience in the School of Charity and mission. It is also a simple proposition which could contribute to the return of confidence in the daily life of the faithful. Last week he was overwhelmed by the appalling record of the Sauvé report, but I believe we can use it at our own level to make a fresh start.

All this also shows that we need brotherhood before anything else. While some of the first meetings of our “little groups” took place by videoconference because of the coronavirus crisis, a rather wonderful dynamic has taken hold: some believe they have completely “unlocked” their practice of prayer, others evoke the meeting “of brothers and sisters” when they did not attend anyone at mass. I also believe that one can find there a stronger connection with God: I feel that he speaks to me even more clearly through the Word and the testimonies of others. “