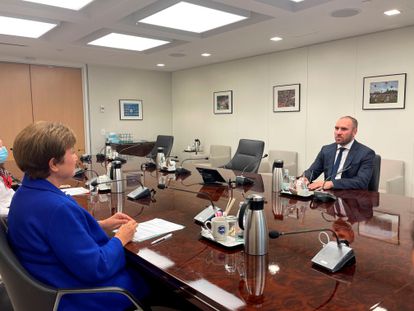 The evolution of the Argentine economy in 2022 is tied to the restructuring of the debt of 44,000 million dollars contracted with the International Monetary Fund (IMF) in 2018. The South American country, badly hit after three consecutive years of recession, cannot face maturities for 19,000 million dollars expected for next year with the international organization. For this reason, negotiate a new payment schedule against the clock. The new goal, as reported this week by President Alberto Fernández to businessmen, is the first quarter of next year.

“I met with the minister [de Economía argentino Martín] Guzmán and the commitment is to work constructively. We have to find a good point of agreement, where the agreement is credible and useful for Argentina ”, declared at a press conference the head of the IMF, Kristalina Georgieva, hours after the meeting, without giving further details about it. For Georgieva, the new program negotiated by the Fund aims to find “a path so that Argentina can have firm policies to induce private growth, generate genuine employment and focus public spending.”

Argentina holds legislative elections on November 14, in which it will elect half of the new members of the Chamber of Deputies and a third of those of the Senate. After the stalemate in the dialogue at the beginning of the year, economists took it for granted that the Fernández government would delay the agreement until after the electoral appointment to have a free hand on public spending and fiscal deficits. But a month before the elections there are no news in sight. During a lunch with the country’s main businessmen on Tuesday, the president reiterated that the talks “are on track,” but they do not foresee closing a restructuring pact until the first months of 2022.

The latest round of dialogue began this week in the United States. Guzmán described the meeting with Georgieva on Tuesday as “valuable” and underlined his support for the head of the IMF in the midst of the internal crisis opened in the organization for the investigation opened against her in the face of an alleged favorable treatment towards Beijing during her time in the World Bank.

“When you have more debt in dollars, it means less possibilities of expansion of economic capacity and more inflation, when dollars are lacking there is less growth and more inflation,” Guzmán said in an interview released this Wednesday at the Idea business conference. “We have to solve it,” he stressed before criticizing the former Executive, headed by the conservative Mauricio Macri, for having requested a loan from the IMF that was impossible to repay under the agreed conditions.

The IMF approved in mid-2018 to grant $ 56.3 billion to Argentina after a sudden capital flight accelerated the depreciation of the peso. After winning the presidential elections in October 2019 from Macri, the Peronist Alberto Fernández declined to accept more funds than the 44,000 million already received up to that moment and announced that he would seek to renegotiate the payment schedule. In September, Argentina paid a maturity of more than 1,800 million and in December it must face another one, but the bulk of the payments are concentrated in 2022 and 2023, with disbursements of more than 19,000 million dollars annually. The lack of access to financing in international markets prevents it from meeting these commitments.

The Fernández Executive intends to close an agreement of extended facilities, with lower interest rates and payment terms of at least 10 years. The pact reached with the IMF must later be ratified by the two Argentine legislative chambers.

Negotiations with the IMF have increased tensions within the ruling Frente de Todos coalition. Vice President Cristina Fernández de Kirchner is in favor of an increase in public spending that Guzmán opposes due to its impact on an economy with serious macroeconomic imbalances, including one of the highest inflation rates in the world, which in 2021 is expected to approach again at 50%.

Subscribe here to the EL PAÍS América newsletter and receive all the informative keys of the current situation in the region.

AMLO on complaints against Pedro Salmerón: “You cannot judge if there is no evidence”

Covid-19 in England: Boris Johnson announces the end of most restrictions